Movie Review – In the Name of the King: A Dungeon Siege Tale 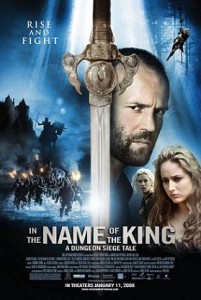 One of my favorite theatrical experiences was watching 2007’s In the Name of the King: A Dungeon Siege Tale in a packed theater on opening night. The crowd – mostly consisting of average moviegoers who were clearly unaware of director Uwe Boll’s reputation – was ready, popcorn in hand, to enjoy a fantasy adventure in the vein of Peter Jackson’s Lord of the Rings films. Excitement was in the air as the audience anticipated a fusion of European fantasy and wuxia martial arts unlike anything they had ever seen. And then the movie started.

As the movie begins, the audience is immediately baited into laughter with a scene in which the scheming wizard Gallian (Ray Liotta, in full-on “mascara” mode) seduces a naïve magical ingénue played by Leelee Sobieski. Gallian’s plan entails syphoning the girl’s magic through sex so that he can be the most powerful wizard in the kingdom of Ehb (be prepared for many more silly names!). 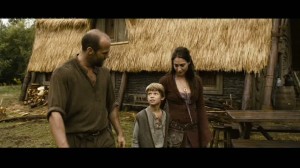 Not settling for mere magical superiority, Gallian is also plotting the good King Konreid’s (Burt Reynolds) demise and manipulating the king’s nephew. Taking over a kingdom requires an army, and Gallian’s consists of a race of murderous orc-like beast-men called the Krug. After the Krug raid a simple farming village, killing and imprisoning its people, the man known as Farmer (Jason Statham, and yes, his character’s name really is Farmer) sets out on a quest for vengeance that will find him playing a vital role in the fate of the entire kingdom.

This movie is a parade of recognizable actors trying their hardest to ruin their own careers. While many of the actors in this are no strangers to bad movies, they don’t deserve this level of embarrassment. Even the world’s most prolific “annoying actor,” Matthew Lillard, who gained infamy in this film by yelling “I AM YOUR KING!” at the top of his lungs, is too good for this. The incredibly pained look on John Rhys-Davies’ (AKA Gimli from the Lord of the Rings trilogy) face in every scene he’s in really says it all. 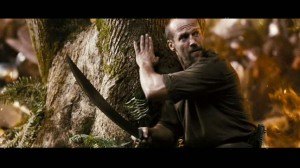 As I watched this mess unfurl itself on the big screen, I noticed the audience slowly turn on the film. Despite some chuckles early on, there was clearly a fair amount of denial worming itself into the audience members’ minds, and the sad collection of moviegoers were trying their hardest to get their money’s worth. With a running time of over two hours, In the Name of the King burned through whatever goodwill it had with the audience about halfway through. By the time Burt Reynolds was spouting his interminably long death-bed soliloquy, the majority of the audience was either howling with laughter or hurling insults toward the screen.

Review 2 (out of 7) – Die-hard Uwe Boll fans will undoubtedly get a kick out of ItNotK, but everyone else should steer clear of this train wreck.