At the time of writing, I’m just back from spending 9 hours sitting in a large cinema screen to have a triple bill of films to celebrate the EU release of Avengers: Age of Ultron. I like to be able to think I can view films as comic adaptions and as films outright so I’m going to touch on the merits of the film in both categories, I promise no hard plot spoilers so read on with care.

The film starts following straight on from the events of Winter Solider and the opening sequence is the kind of “Pre-credits action sequence” that I wish comic book films would do more often (The Spider-man films in particular would really a fun pre-credits fight against a c-lister) as the team gets straight into action. The visuals are clear as you could want, even if I could have done without a bit of forced slo-mo that just felt like it was there because it’d look “really cool” in 3D, and every team member gets a moment to shine with the action or a trademark Whedon quip or 2. It gets the audience straight into action, sets up a number of plot lines (some organically, some…not so much) and gets the audience ready for a good time.

And what follows is a good time, there’s a ton of action that’s really entertaining, there’s a number of trademark Whedon quips that we all love to see our heroes sprout and all the actors are as charming as ever. But as we all learned from Thor: The Dark World, you can have great action, funny one-liners and actors with great screen presence but that doesn’t make it a good film sadly. In my eyes, presumably because they’ve all been massive box office successes, Marvel haven’t learned from what I would deem the missteps of their previous films.

I’m going to start with the big one in my eyes, your mileage will vary but as a comic fanboy, I’m a massive fan of Ultron, he’s my favorite Avengers villain and I was so hyped to see this terrifying artificial intelligence brought to life on the big screen. My enthusiasm was slightly dampened after hearing Spaders too human voice in the first trailer but I decided to just keep my expectations open. In an effort to keep them open though, I avoided all further trailers for the film in fear they’d lead to me judging the film too much before I went in. 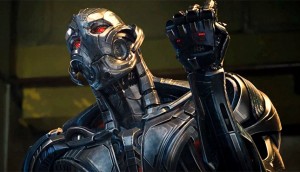 To be fair to the film they get Ultron absolutely right….in his first appearance only. I’m not to explain why for fear of ruining it for you but his first proper scene had me terrified and shaking, he was Ultron just pulling himself together and he was somehow more terrifying than any of his subsequent scenes. Because from his second scene on, the more robotic Ultron is replaced by an Ultron that is all too human, his face (Seemingly modelled after James Spader in mo-cap) doesn’t have the terrifying static large red mouth of the comic version but instead looks all too human, moving even more fluidly than Iron Man does.

After going through the whole of phase 2 without a good villain, they seemingly decided to model Ultron after their best one to date: Loki (Not including Kingpin in the Daredevil series naturally) so for some reason we end up with a really charismatic evil A.I that wants to wipe out all human life. As a comic book fan, this just felt rather unlike the cold-heartless-ruthless Ultron I grew up reading in the comic. I like to think I could have gotten past it if Ultron had a strong character or presence on film but again I was let down. Even my friend who I took to see the film with me who’s never read an Ultron comic in her life said she felt that he came across way too human for an AI.

Spader to his credit gives the performance he’s asked to and does it well, he brings his trademark wit to the script and gives a fine performance that will please his fans (and apparently he has a lot of fans considering one of my friends came to the showing wearing a James Spader t-shirt) but the issue is that Ultron isn’t given a character. Sure he’s given more lines than Malekith, Ronan the Accuser and the Winter Solider but all of it just seems to be just giving Spader witty lines to say and rarely do we see anything reassembling a character come from the A.I, beyond his human like personality mannerisms and his desire to destroy everything. We’re momentarily teased in one of his first appearances that he takes a few of his traits after Stark but after teasing you with that the film decides to do absolute nothing with it, instead opting to have Ultron just move the plot forward and be charismatic as Spader does for the rest of the film. Basically, I wish they put half as much effort into actually making him come across as threatening as they did charismatic.

In case you haven’t got the picture from the last few paragraphs…really not a fan of what they did with Ultron but he’s far from the films only weak link. The character work takes another hit down from the standard set in The Avengers as so many of the regular players we’ve spent a lot of time with already (Cap Shellhead and Thor) again get reduced to Whedon quip machines and one line personality descriptions in the name of getting them to fight each other, a side effect of a large cast. 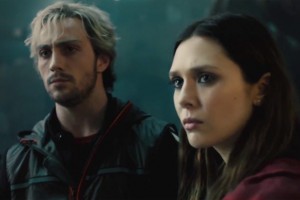 Even our 3 new additions to the team in Quicksilver, Scarlet Witch and The Vision, probably have one real character moment between the 3 of them and as a result it’s really hard to care about any of them as they fight to almost certain death against an army of killer robots. Remarkably, Quicksilver came across better (and with more character) in his one scene in X-men Days of Future Past than the entirety of all his scenes on Age of Ultron which in my eyes is a massive failing on Marvel’s part. Another bad sign is for the life of me after coming out of the film, I can’t tell you what on earth Scarlet Witch’s actual powers are: “He’s fast, she’s weird”is all the explanation the film gives us and there’s not a single mention of chaos magic.

The Vision (another personal favorite of mine in the comics) fares slightly better than Ultron in my comic book fanboy eyes, his movements and his powers (even though like SW it’s not ever explained what they are in the film which I assume might confuse a lot of cinema audiences that aren’t versed in comic mythology) are ripped straight out of the comic for the most part and while I’d like his voice/dialogue to have been a touch more cold/robotic I’m happy enough with how they chose to portray him. By the time he’s brought into play, there’s too much already going on for him to get a proper moment to shine. There’s subtle hints to his development in the comic we don’t see him exhibit that much of his famous personality that’s made him such a fan favorite Avenger all these years. 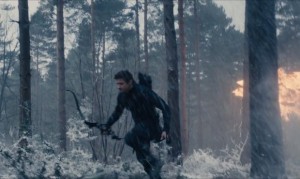 The characters the film does give attention to however come out of it well, after being relegated to the sidelines in Avengers (and all of Phase 2) Hawkeye easily steals the show here coming out with most of the best lines and most of the best moments (and that sentence alone has probably scared all of you more than anything else I’ve already written). Widow and Hulk get some rather odd developments but despite them feeling extremely forced the extra time spent on both is much appreciated considering how little we know about them (In particular Widow despite this being her 4th Marvel film, on par with Evans/Helmsworth in terms of appearances at this point) and how little character work everyone else gets, yeah I’ll take whatever character work I can get at this point.

So with the character work not great across the board you’d think we’d get an amazing plot to make up for it right? Yeah afraid not, after a more than satisfactory pre-credits sequence and a fun diversion shortly after the plot quickly enters “loose premise to tie together a bunch of action sequences and exposition” and…well…let’s just say it’s not satisfactory at all. Not only is the plot lacking substance but it can’t even keep up momentum in its almost 2.5 hour running time as the film slows down in the middle. At this point, it doesn’t seem to know what to do with itself other than take a small break to literally send a character on a detour designed to do nothing but fill audiences in on what will be an important plot thread for phase 3 of the MCU. As you can imagine for us here in phase 2, especially ones that are well versed in our comics mythology, it completely kills the momentum.

By the time we’ve entered the third act it’s a rethread of Avengers climax with Robots instead of aliens and a charismatic robot as the big bad instead of a charismatic demigod. By the time we’re finished, barring a bizarre bait and switch (that seemed rather pointless) and arguably undermining a superior Marvel films ending the plot hasn’t much else to offer.

So what does the film get right? The script is full of Whedon zingers, fun moments of interaction and running jokes and while not all of them hit the mark there seemed to be fewer awkward lines that took me out of the film like in Avengers (or, dare I speak it, toad lightning)  and the actors remain as charming and watchable as ever. Though the new additions less so, but that’s more to do with the lack of time they’re given to do anything probably. The action is also breath-taking and there’s so many cool fist pump moments…oh and the Stan Lee cameo is fantastic.

Review 3 (Out of 7) – I think I’ve gone on enough by now so to sum up: I had a ton of problems with Age of Ultron and I don’t think it’s a very good film by any standard. I can’t deny though despite my problems there’s a still a good bit to enjoy about it and a fun time can be had. Sadly, though it just can’t stand up against other far superior entries in the MCU to date. Made even more difficult to stomach after coming off a marathon of the original Avengers and Captain America: The Winter Soldier.

If I sound bitter it’s only because I really wanted to love this film and after a strong opening 40 or so minutes the film just failed to do it for me.