Godzilla Raids Again is a mess. Even ignoring the disastrous American version of the film (originally titled Gigantis the Fire Monster), it is a film constantly searching for its own identity, eventually settling as a hollow retelling of the previous Godzilla tale. It is most notable for being the first film in which Godzilla fights another monster (though neither is portrayed as heroic), but it so closely mirrors its predecessor aside from that (while tossing genuine emotional heft to the wayside), that you almost begin to understand why the producers of the American version thought audiences might actually buy into the idea of the titular monster not being Godzilla.

Of course, anyone with half a brain knows that the monster that looks and acts exactly like Godzilla is Godzilla. The Japanese version posits that Godzilla truly died at the end of the first film, with this new monster being part of the same species and also awakened by hydrogen bomb testing. So there you go — meet the new Godzilla, same as the old Godzilla. Sequel problem solved. 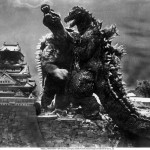 Paul Schreibman, producer of the American version, thinking that audiences would be more excited to see a brand new monster, changed Godzilla’s name to Gigantis and edited his iconic roar to match that of the new rival monster, Anguirus. Even those in charge of the edits were apparently confused by the changes, with Godzilla occasionally being referred to as a member of the “Anguirus” species of dinosaur, and the original Godzilla roar sneaking in once or twice toward the end of the film.

Sadly, the changes don’t end there. Possibly the worst alteration to the film is the addition of a needlessly overbearing narration by the main character, Tsukioka. The audience isn’t allowed more than a few seconds to determine what is happening on screen before Tsukioka’s dubbed voice cuts in and blathers on endlessly. Below are just a few of Tsukioka’s reflective observations:

“I waved at him!” (as Tsukioka waves at a friend onscreen)

“Survival was uppermost in everyone’s mind.”

“It was a nightmare of horrors.”

Were the translators under the impression that they were writing a book instead of translating film dialogue? There are a handful of effectively solemn moments in the Japanese version that are utterly ruined by the pointless narration. On top of this, the fairly impressive musical score was almost entirely replaced by stock “library” music that is devoid of any emotion whatsoever.

While the changes made in the American version give the film an entirely different tone, they at least allow the film to be enjoyed as an unintentional comedy. The Japanese version, on the other hand, is a bit on the boring side. The fights between Godzilla and Anguirus (a radioactive Ankylosaurus that is also awakened by nuclear testing) are entertaining despite the film footage being sped up to comical levels, but the rest of the film leaves much to be desired. When legendary Japanese actor Takashi Shimura briefly appears, reprising his role as Dr. Yamane from the previous film, he looks utterly bored, and you can hardly blame him.

So there you have it — Godzilla Raids Again is a film with two distinctly flawed cuts. Pick your poison between the boring-yet-occasionally-effective Japanese version and the absurdly edited American version that tries to pretend it’s not a Godzilla film. For my money, I’d go with the American version. The battles between Godzilla and Anguirus are largely unchanged, and you can have a fun time laughing at all of the inappropriate changes made to the rest of the film.

Fun fact: George Takei (Sulu from Star Trek) and Daws Butler (the voice of Yogi Bear) lend their voices to the American version of the film. Listen carefully for Takei’s instantly recognizable laugh!