Released in 1962 — a full seven years after Godzilla Raids Again — King Kong vs. Godzilla is a radical departure from the attitude of its predecessors, establishing a successful formula for Godzilla films that would be used for decades.

The story follows a group of men who produce a television show sponsored by a pharmaceutical company as they seek the legendary monstrous ape King Kong in order to increase their show’s ratings. Just as they arrive on Kong’s home island, however, Godzilla is accidentally released from his frozen prison by an American nuclear submarine in a sequence featuring some hysterically inept American actors. Fearing his discovery of Kong will be upstaged by Godzilla’s re-emergence, the president of the pharmaceutical company devises a plan to transport Kong to Japan so the monster can take on Godzilla in what is sure to be a media phenomenon.

Some plot, huh? As convoluted as it might sound, the general formula of “bumbling humans run around for an hour trying to exploit one monster to destroy another,” leading into a raucous climactic battle serves the Godzilla series quite well. It organically enriches the narrative by allowing for one monster (in this film’s case, King Kong) to be portrayed as somewhat heroic, while also giving the audience a human perspective it can relate to.

King Kong vs. Godzilla is much more comedic in tone than the previous Godzilla movies, with plenty of overacting from its lead actors and a surprising amount of slapstick in the monster battles. It really feels like the Godzilla series found its groove in the swinging 60’s, with the film being a surprisingly enjoyable adventure-comedy. The unaltered Japanese version is actually genuinely funny at times, though that version has sadly never been released outside of Japan. Predictably, the American version makes drastic cuts, replaces Akira Ifukube’s memorable score with stock music, and adds bland footage of American actors essentially narrating the film as United Nations correspondents. I would definitely recommend watching a subtitled version of the Japanese cut, which shouldn’t be too difficult to find. 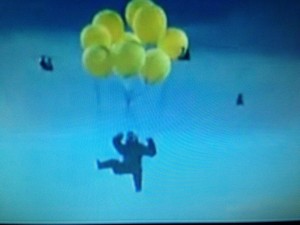 It should be noted that at the time of this film’s release, King Kong was a much more popular monster in Japan than Godzilla — and, in fact, King Kong vs. Godzilla remains the most successful Godzilla film ever released in Japanese theaters. I personally think that King Kong makes for a rather goofy Kaiju, but his fight with Godzilla is undeniably fun and creative. Between Godzilla’s stop-motion jumpkick (!) and Kong stuffing an uprooted tree into his adversary’s mouth, the climactic fight is one of the most memorable in the entire series. Grab a bowl of popcorn and enjoy this film for what it is: a goofy excuse to film two guys in monster suits beating the crap out of each other.

And where else are you going to see the image of Kong flying with balloons?