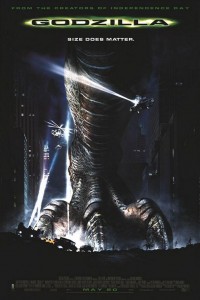 One can only discuss the Godzilla franchise for so long before having to acknowledge the “gorilla-whale” in the room that is 1998’s Godzilla. Hot off the heels of the hugely successful Independence Day, director Roland Emmerich sought to do for monster movies what he did for the disaster genre. As we all know, Godzilla proved to be a critical failure that, despite an impressive worldwide haul, suffered a severe backlash from audiences that prevented a seemingly inevitable sequel from being made.

On paper, Godzilla provides the same mix of action, humor, and spectacle that made Independence Day such a hit, so what exactly went wrong? For starters, the cast of characters is largely unlikable. Matthew Broderick’s character is the least offensive, being an idealistic and naïve scientist whose most defining character trait is his hard-to-pronounce surname. From there, we have (in order from bad to worst) the opportunistic love interest, the obnoxious blue collar friends, the smarmy news reporter, and the incompetent mayor. Every character is one-dimensional and none of the actors exude any charisma whatsoever.

So the human characters are mostly duds, but what about Godzilla himself? While I personally don’t think the design is terrible, the Godzilla of this film has little in common with Toho’s iconic creation, resembling a cross between an iguana and a Tyrannosaurus Rex. Instead of being a hulking, unstoppable menace that unflinchingly withstands whatever weaponry the military can use against him, this new Godzilla is a lean, agile beast that ducks under gunfire and weaves around missiles. When a military submarine finally hits Godzilla with a couple torpedoes midway through the film, the beast goes down for the count. Needless to say, Godzilla’s vulnerability to conventional weapons is a huge disappointment in itself. 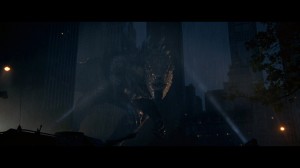 The film’s biggest problem is that it doesn’t know when enough is enough. At 139 minutes, Godzilla is absolutely exhausting to sit through. When Godzilla is hit by the aforementioned torpedoes, you think the film is wrapping up, but then a lengthy Jurassic Park-inspired sequence involving Godzilla’s velociraptor-sized offspring begins. Even after Godzilla’s babies are dealt with, the titular monster returns for one more embarrassingly contrived chase sequence (again, straight out of Jurassic Park). Despite impressive effects that have held up surprisingly well over the years, the action sequences are derivative and unexciting, and drag on for far too long. Not helping matters at all is the fact that almost every scene is very dark and very rainy, so it’s sometimes hard to even tell what’s going on.

Aside from having stale action and insufferable characters, Godzilla is also insulting to its audience’s intelligence, with some of the most blatant product placement I have ever seen. I would go so far as to suggest that the sole reason a climactic sequence takes place in Madison Square Garden is so that as many brands could be plugged as possible. My favorite instance of ridiculously obvious brand-promotion is a large TNT logo hanging in pristine condition amidst the rubble of the arena when the characters are trying to escape from Godzilla’s babies. Equally gross is Emmerich’s not-so-subtle attempt to disparage Roger Ebert (who disliked the director’s previous films) by using his name and likeness as an inspiration for the incompetent mayor character (whose assistant’s name is Gene). 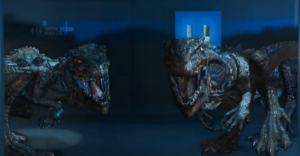 Godzilla might have been passable entertainment for those starved for big-budget spectacle in the late 90’s, but it is difficult to find any redeeming qualities when watching it now. Strangely enough, the most interesting thing about this film is seeing how Hollywood envisioned New Yorkers reacting to a devastating event in a pre-9/11 world. I don’t expect filmmakers to be able to accurately predict how society would react to a large-scale tragedy, but I would expect something a little more grounded than the “Hey, there’s a monster stomping through the city killing thousands of people..! Oh well – everyone get back to work!” portrayal that is all throughout Godzilla. The snarky, eye-rolling reactions of pretty much every character to Godzilla’s devastation are frankly disgusting.

So there you have it. Emmerich’s Godzilla film is one that I really don’t like to include as an official entry in the series, but it serves as a reminder of how badly the property can be handled. Fortunately, the producers of 2014’s Godzilla made it a point to go in the opposite direction of Emmerich’s film in nearly every regard, and occasionally to the newer film’s detriment. Godzilla fans should just be happy that Hollywood was given a second chance, period.

Fun Fact: In 2004, Toho officially referred to the creature in this film as “Zilla,” saying it is a creature that was mistaken for Godzilla when it attacked New York