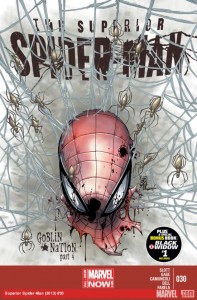 Superior Spider-Man #30 continues with Superior Spider-Man and Spider-Man 2099 trapped by Mayor Jameson’s Goblin Slayers, except the Goblin has hacked them. This is how Otto learns that the Goblin has Anna Maria, and he decides that he is going to leave Spider-Man 2099 to die in order to save her. Meanwhile, in the mindscape Peter finally realizes who he really is after seeing the image of Otto dying. Peter finally accesses all of his memories and decides it time to reveal himself to Otto. At this moment Otto has made his way underground and sees a child in the way of the train, and begins weighing options. Peter takes control and saves the kid, while doing this he let Otto know he is back. At this moment Otto realizes that he is not Superior and can’t be a hero and goes back to his lab. It is here that Otto tells Peter that the only way Spider-Man can save his love, Anna Maria, is if Otto wipes all of his memories and giving Peter his body back. This happens, Peter stands up and put on his Spider-Man suit.

Dan Slott has just delivered what was an excellent “ending” to the Otto/Peter battle. Otto may not have felt like he was a hero, but he sure went out like one in this issue. Ending the issue with the classic Spider-Man suit was an exciting thing to see. Every page delivered in both the story and the art.Â Camuncoli gave readers a masterpiece on each page with the detail as well as the panel layouts. This was the perfect ending to a very interesting and controversial story.

Overall, Superior Spider-Man #30 gave readers the conclusion they deserved in regards to Otto and Peter, but this story is far from being over. Peter has a lot on his plate with helping his city, stopping the Goblins, and dealing with the fallout of the Avengers. If there is one person who has faced trouble like this before its Peter Parker. He is back and he will do whatever it takes to make it right! 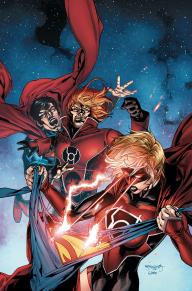 The Red Lanterns are still very excited about their newest member Supergirl. Kara is enjoying showing off her powers, as well as trying out her new Red Lantern skills. After having her fellow lanterns launch missiles at her they decide to go get a drink at “The Bar”, which is when Guy arrives. Guy tells Kara that she can’t drink and that the Red’s need to go control their sector. The Red Lanterns arrive near Earth and Guy tells Kara to check the dark side of the moon. When she flies off he tells the other lanterns that she is more trouble then she is worth. They fly down to Earth and meet up with a busy Superman. Superman is shocked to hear the Red’s control 2814 now and that he doesn’t trust them. Kara arrives and finally Superman finds out why the Red Lanterns wanted to talk. They agree that Kara needs to go off on her own and try to learn from her choices. When the Red Lanterns arrive back toÂ Ysmault they learn thatÂ Atrocitus is coming.

Charles Soule has done a fantastic job with this series and has turned it into a must read in the Green Lantern universe of comics each month. This was a great cameo by Superman in this issue and really helped the reader accept that Supergirl is not going to be the same and might actually be a Red Lantern for a while. If the Red’s do something to upset Hal and the Green Lanterns we can only wonder what side Superman would take. Vitti art is very detailed, which helps this title compete with the other Lantern books.

Overall, Red Lantern #30 was a fun issue that had an unexpected character show up that really needed to be involved. Having Superman’s approval goes a long way for the Red Lanterns to gain acceptance of controlling Space Sector 2814, especially with the troubles going on with the Green Lanterns. Soule has continued a strong story which is supported by some beautiful art. 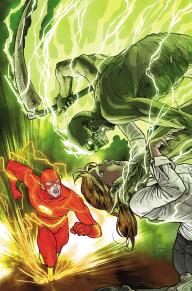 The Flash is still in search of the Keystone Killer, which is really a spirit trying to get revenge for being killed before the gem cities were founded. Flash and Deadman are hot on the tail of the various people the spirit is controlling. The spirit can only be in a host for so long until it needs to find someone else, that is unless it can find one of his descendants and could control them forever. Flash along the way learns the true that he is the one the spirt is looking for. Deadman is not able to keep up with Flash and decides to try and get the spirit into the House of Mystery. It is here that Flash allows the spirit to control him before vibrating at a level that traps the spirit in the House of Mystery for good.

Another Flash issue with another disappointing story, the art is really what has been making this series worth the purchase because it really is some of the best in the New 52. This issue really did two things, it ended a story that really was not that interesting and it set up for the new creative team coming in issue 30. Flash has some interesting villains that have not been explored yet in the New 52 hopefully with the new creative team they explore some of the characters and give the Flash the stories he deserves.

Overall, The Flash #29 was another disappointment story wise, but continues to amaze with the art. A new creative team comes in next issue that has me very excited and I hope they are able to turn this series around and give the readers some interesting stories, while also keeping the art top notch.

Thoughts ? Let me know in the comments below or on Twitter: @joshraj9