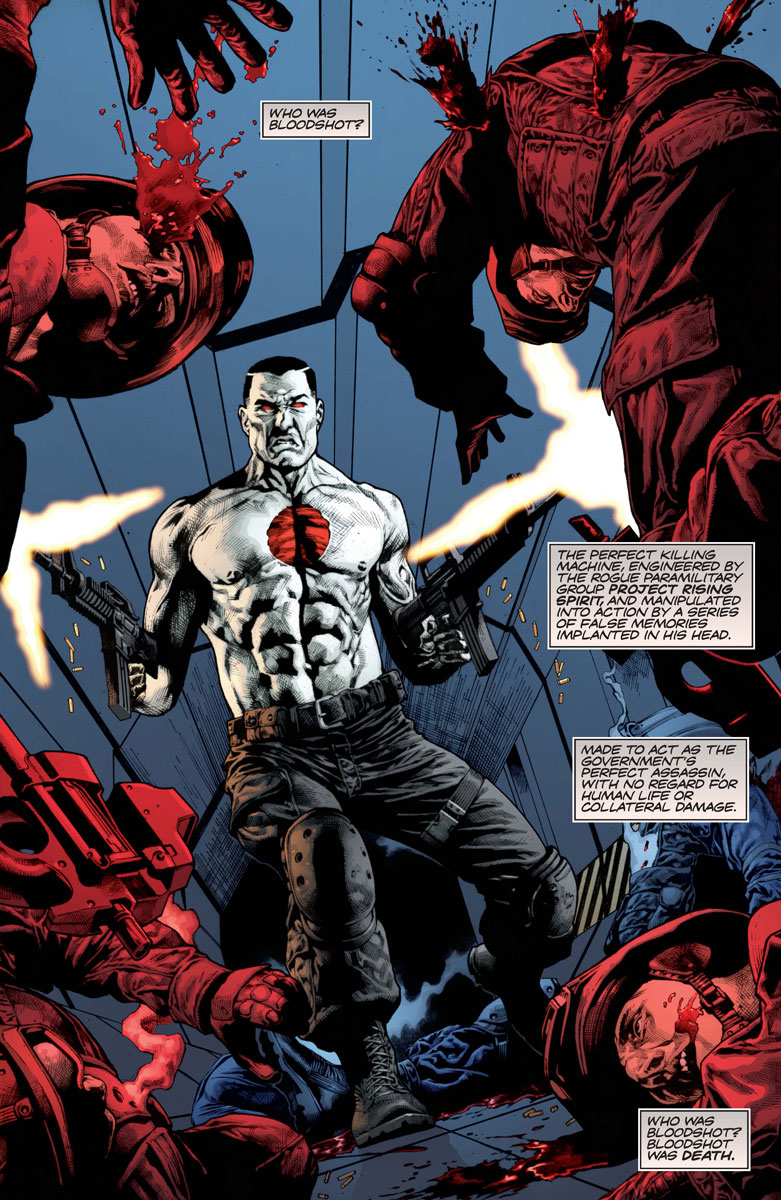 Wanting to fully flex my freshly-printed Press Badge muscles at WonderCon 2015, I jumped at the chance to conduct my first interview ever with prolific colorist David Baron. The “Bloodshot Reborn” and “Divinity” collaborator graciously took the time out of his schedule to clarify the nuts and bolts of coloring, explain his role in Valiant’s upcoming schedule, and answer hard-hitting questions like…

Ooh, that’s a tough one. I get asked that question quite often and my answer is I don’t really have one – I have color combinations. I love blue with red. My friends joke I use purple way too much but a good type of green/purple combination is always kind of nice. But I would go with blue and red working together.

Did you grow up in San Diego?

I was born in Orange County but then I moved to San Diego, La Mesa area pretty early. I grew up all over San Diego.

Did the perfect weather have any impact on your art or artistic influence?

No, but San Diego absolutely did based more on the luck that Wildstorm was in San Diego as were a couple of coloring houses that were brand new to comics. It was really the right-place-right-time for me. 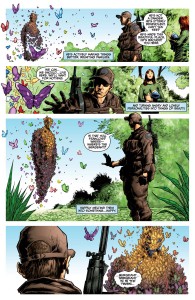 So, Divinity. Credit to the whole creative team, it’s a really great book but part of what made me stand back and say “Wow!” was your coloring, especially issue two. The butterfly man was like “Wow”. My question: is coloring collaborative? Do they let you just go and do your own thing or is there a back and forth? How does that process work?

It’s definitely collaborative but you start off by doing your own thing. Well, kind of untrue. You start off reading the script, looking at the art, so by that sense it’s collaborative. I wouldn’t have my same thoughts if I didn’t read the script. I wouldn’t have the same thoughts or emotions if I didn’t see the art with the script so in that sense it is collaborative. However, you go at it on your own. After that you send in the color proofs and then the editors will talk to you about what they might want to see changed, what works, why. Sometimes they’ll even ask you “Why did you do that? We like it – we just want to make sure that it has a meaning to it.”

But for the most you get to go right at it yourself. That’s what you bring to the team. And a lot of times you don’t want to tell a colorist too much because you’re kind of handcuffing them at that point. You want to see what they’ll come up with unless you have a very clear idea. However, day, night – certain times story-wise are all key points in the script or art that we play off of.

Is there a specific color scheme or palette for the book you try to shoot for or is it flexible?

Very flexible. I know some people will keep a color scheme. I have had a very limited palette before. But for the most part I keep my palette wide open so I can tell the best story possible without handcuffing me too much.

What’s it like working with Matt (Kindt), Trevor (Hairsine), and Ryan (Winn)? (The writer, penciller, and inker on Divinity, respectively) 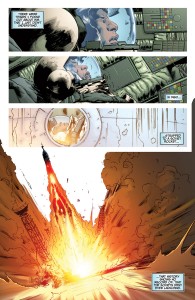 They’re amazing. At Emerald City I was able to sign with Matt Kindt quite often. He’s a great guy, very fun to be around, very creative guy. I think he has the best signature in comics because he’ll do very creative things based off his covers, even going so far as cutting out a page of the comic, drawing on it, and pasting on the inside front cover something that he planned to do. If you’re lucky enough to ever get him to do that on one of your books you have to ask him why and know the story. It’s a very good story I’ll let him share.

Trevor I’ve worked with before on “Bloodshot: Armor Hunters” and even before that on another company’s project. He’s a great guy, really enjoys work, has a lot of emotion and a very sketchy line. Ryan Wynn polishes that line with his inks, bringing clarity to confusing images every so often and then, as Ryan will say, “Sometimes I just let Trevor’s art shine through and I trace.” He does some amazing work. I really enjoying working with Ryan Winn a lot because he’s the one who sends me the pages directly. Every time we see a new page of pencils, him and I will talk on the phone for a half hour about that page. Every time we see the inks, every time we see the colors, him and I are constantly being huge fanboys for our own book, not because of the stuff that we’re doing but what Trevor and Matt are doing.

Other Valiant writers and artists have spoken of the freedom in working for the revamped line. Is that a feeling you can jibe with? Do you feel like you’re blazing a trail?

I don’t know if I feel like I’m blazing a trail, however I do get mass freedom. I’ve worked with many other editors and companies before. There’s something definitely special about Valiant. It reminds me of the earlier days of Wildstorm, those type of feelings that I got when I was working with them. They’re so supportive of your work, so encouraging of your work, and then they will also bring you balance. And that’s something hard to do – to be supportive and encouraging and free, and yet still give you a critical eye when necessary. They don’t let you just hand them back garbage. They trust you and let you go, but if something’s off they’ll let you know in a very constructive way.

Are there any books or characters in the Valiant universe you’d like a shot at?

Yes, there’s a lot of them. I think I’ll be getting a shot at them pretty soon coming up on some crossovers, but as a whole I really enjoy so much. I would like another shot at “Archer & Armstrong”. I really enjoyed that book with Fred (Van Lente) and Pere Perez. I’m hoping one day it’ll come back. I really enjoyed my run on “Shadowman”. I thought that was a good time.

But if I could pick one character that I wish I had a clear shot at? I think I’m getting it on “Bloodshot Reborn”. It was going to be Bloodshot and I got granted that wish. 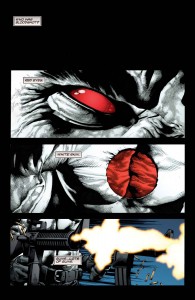 Can you give us any teasers for Divinity or Bloodshot Reborn?

“Bloodshot Reborn” is one of the most cinematic, well-thought-out books I’ve worked on in a long time. You get so much at face value and than you’re going to get a whole added layer on a re-read. We have scripts written past 20, art for issue 10 already in, issues 1 through 3 are already in the can wrapping up that storyline for the first arc.

“Divinity” is one of the most interesting books I’ve worked on in a long time because it made me even more of a fanboy than other books in recent history where I’m so interested in all the characters and where they lie, not only in the Valiant universe but just in their own title as it is. I’m looking forward to seeing where it goes because I don’t like to know so much about the characters in advance. I like to be along for the ride. I just want to know enough to make sure I’m producing my part of the book at the highest quality possible. It’s hard to give teasers on both of them because the teasers really become spoilers and I hate giving spoilers because I think both books are fantastic journeys for anyone to be apart of.

What are some unexpected colorist’s challenges? Is there such a thing as “colorist’s block”?

Yes, absolutely. There’s only so many millions of colors to pick from so it seems like you wouldn’t have that block but you get known for certain color schemes and you don’t want to be type-casted so to speak. You want to be a little more versatile to tell a wonderful story. It’s good to be known for telling a story – not for using purple.

The worst block I get is on a very interesting book – I can actually use “Bloodshot Reborn” as an example. The artwork is so beautiful and you’re trying to add some type of highlight to the color to be a part of the story and you get caught up in thinking, “Well this is how the scheme should look, this is how the colors should look – but I just used that last time so what do I do now?” And that’s when the block comes in. I think there’s more colorist’s fatigue than there is block, where sometimes you’re just colored out and need a break before you can jump back in and color your next project. I try to make sure I do plenty of breaks in between. 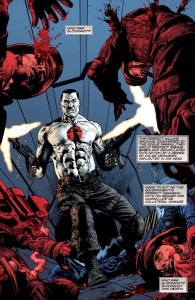 There’s going to be a summer project announced with me on it. I’m not sure exactly what my role will be so I can tease that. I’m a Valiant exclusive. Everything I’m going to do is for Valiant and we usually announce it pretty early. So currently it will be “Bloodshot Reborn”. As I said, we already have art for issue 10. I’ll be working on that for quite some time.

Last question – any tips for the aspiring colorists out there?

Practice. Practice. Make sure you love what you do. Don’t be a colorist because you think that it’s the easiest part because that’s just not true. Being a quality colorist takes know-how. You need to understand color theory, you need to understand how to apply color to someone else’s art, all interesting aspects of coloring that people take for granted.

If you can learn from school – great, go to school. If school’s not for you, try to find a community of artists you can share ideas with and apply. You can’t find that – go online. Don’t want to do all three of those – at least practice. If you’re not willing practice there’s no way you can do really anything.

Special thanks to the wonderfully talented and polite David Baron for letting me pick his brain and the Valiant staff for helping set this up over the busy WonderCon weekend. “Bloodshot Reborn” #1 is out on stands today and “Divinity” #3 will be out next Wednesday the 22nd. Check ’em out!