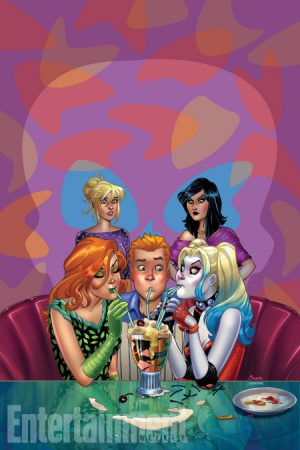 In Harley and Ivy Meet Betty and Veronica #1, writers Paul Dini and Marc Andreyko, artist Laura Braga, and colorists Tony Avina and Arif Prianto conspire to get two of pop culture’s greatest female friend duos into the same room. Veronica’s uber wealthy dad, Hiram Lodge, is literally draining a swamp to start his own for-profit university Lodge University that claims to be a free college, but is really a strip mall meets the University of Phoenix. He is so unscrupulous that has a deal with Principal Weatherbee to give extra credit to students who help with a fundraising gala so Archie, Betty, Jughead, Midge, and other of Riverdale High’s best and brightest are providing unpaid labor and smoke machine maintenance for him. Then, enter Harley and Ivy, who are ready to go all eco-tourist in vines and shorts and shorts on this one percenter, who is destroying Riverdale’s natural beauty.

Dini and Andreyko still write Betty and Veronica as bitter rivals complete with supporting characters like Sabrina and Kevin Keller watching them like they’re a soap opera, but luckily, their conflict doesn’t stem from fighting over Archie although there are a few longing glances hurled the ginger goofball’s way. Instead Betty and Veronica become the high school teenage girl avatars of class struggle in the United State with Veronica representing the one percent with her privilege, gentrification, and designer outfits, and Betty actually having to do blue collar work like fixing thing and buying her Halloween costume from the strip mall. Also, she and Jughead have the best witty asides to Veronica’s ridiculousness. But Dini and Andreyko definitely lean on the friend, part of frenemy for most of the issue, and Braga gets to draw a super fun costume montage towards the end of the comic. Sir Isaac Newton and an apple is definitely my favorite one, but their eventual choice is perfect for this crossover if a little on the nose.

On the other hand, Harley and Ivy are the true partners in crime using their “abilities” like hammer whacking and plant control to beat up loan sharks on their tail  and also try to weasel their way into Lodge University gala so they can kidnap Veronica and save nature. They don’t get as much screen time as the Archie gang, but Dini and Andreyko nail their contemporary characterizations as anti-heroes with a side of chaos and social justice while Braga draws them like a pair of bounding bombshells, who bring a little crazy to the cookie cutter, yet petty drama filled world of Riverdale. They channel the female friendship, slapstick, and satire infused awesomeness of  the recent Jimmy Palmiotti and Amanda Conner Harley Quinn run, and by the end of Harley and Ivy Meet Betty and Veronica #1, an almost perfect punchline is delivered.

Some of Laura Braga’s faces suffer from samey-ness, but she channels Riverdale and the work of Fiona Staples on Archie and Amanda Conner’s designs for Harley Quinn to make the cast of Harley and Ivy Meet Betty and Veronica incredibly attractive and utterly ridiculous like some of Channing Tatum’s finest performances. Tony Avina and Arif Brianto really accentuates the character’s hair colors from Harley’s wild ombre to Veronica’s raven hair that practically symbolizes the bourgeoisie crushing the proletariat. Braga does both hot and funny well, which is a good match for this book’s tone.

Harley Quinn and Poison Ivy bring a huge dose of Bakhtin’s idea of the carnivalesque to the staid, yet simmering with sexual tension world of Riverdale in Harley and Ivy Meet Betty and Veronica #1 so it’s fitting that Paul Dini, Marc Andreyko, and Laura Braga set the climax of their story at a costume party.

Verdict: 6 (out of 7) – Harley and Ivy Meet Betty and Veronica #1 is a fun, hilarious comic starring attractive and problematic humans that’s like eating your Halloween candy way before October 31.