The A-Z of Geek Cinema: X is for the X-Files: Fight The Future 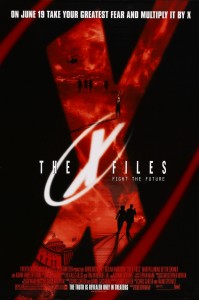 Sometimes, successful television shows make the leap to the bigger screen of the movie theatre. Usually, of course, it’s well after the original show is off the air. Or at the very least after the show has ended. I can honestly only think of two movies that were released while the show they originated from was still on the air (this is, to be fair, entirely based on my memory, so there’s a large chance I’m wrong, because research is for SUCKERS): The Simpsons Movie, which is pretty irrelevant as The Simpsons has little to no continuity, and The X-Files: Fight The Future.

It’s hard to explain to people who weren’t around/paying attention at the time how actually big The X-Files was for a while. A genre show that had roots in horror, scifi, and crazy conspiracy theories, had an increasingly convoluted backstory and mythology, and was a ratings hit? Outside of Twin Peaks (which while awesome flared out in season 2), it was unheard of. But the chemistry between David Duchovny and Gillian Anderson helped catapult the show, and Fox’s ratings, into the stratosphere. Seeing as the show already had a huge audience, and had the backbone necessary to support a feature, it was only natural that a movie would happen. And so, after 5 seasons, when the show was at its apex, X-Files: Fight The Future was released in June of 1998. 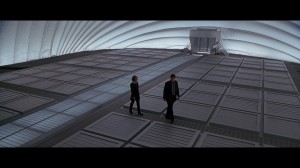 I saw this in the theaters, on its opening weekend. I was all about The X-Files. A nerdy kid with an already huge interest in the paranormal and recurring nightmares about alien abduction? SOLD. The combination of weird, creepy monsters, a pseudo-scientific viewpoint, and a modicum of serialized storytelling hooked me like a Fluke Man, and I watched every episode of every season from 1-5. I was the target audience for this film. And I loved it. It was everything I loved about The X-Files, but bigger, and with more explosions! (And also bees.) But the problem arrived with the advent of Season 6: how do you go from the ridiculous bigness a motion picture implies and return to the relative smallness of the television screen?

The answer, it turned out, was “complicate the hell out of everything.” An already convoluted and barely coherent mythology turned ouroboros and started devouring its own tail, which lead to, at my last count, 5 different “reveals” about what happened to Mulder’s sister Samantha, and at least 3 different and distinct alien races with their own sinister designs on planet Earth’s inhabitants. Now, I suppose its possible it would have gotten this unwieldy even without the movie; Chris Carter was not the most forthcoming when asked about whether he had it “all figured out”. (Hint: he did not.) But it cannot be denied that the movie didn’t help matters. You have Mulder rescue Scully from an actual factual UFO in the frozen tundra, there’s no way to walk that back. So the producers of the show went bigger, they went crazier. And eventually lost their way. I stopped watching at some point near the end of season 6. I don’t know if the movie was to blame, or just a general malaise of the show, but it just didn’t seem to have that magic anymore.

Like I said earlier, making a film from a well-respected and watched television series is a risky venture. You risk alienating your audience by your choices for the big screen, and you risk burning out or upsetting the crew for your show who’ve worked hard to make it all happen. Perhaps it was a mistake to continue the show after the first film. It ran for 4 more seasons, so obviously it wasn’t a failure on that front. But something always seemed to be missing afterward. The follow up film, The X-Files: I Want To Believe, came out 10 years later, and seemed much smaller-scale, almost like a longer episode of the television show. Which is a shame. If any show deserved to go big and stay there, X-Files is definitely in the conversation.