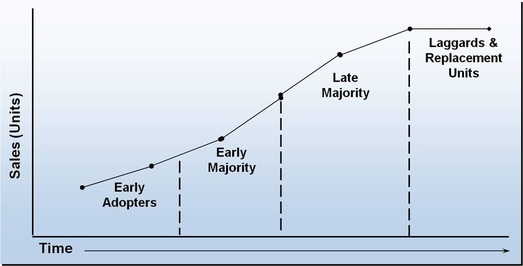 Do you think online reception is important to a product’s early success/failure?

I’d say “early success/failure” in itself is irrelevant. After all, initial reaction doesn’t define the product’s future. There are two very important groups of people that contribute to the commercial success of any product: early adopters and the greater (early/late) majority. Early adopters are what we call the fans or enthusiasts of capitalist society. They tend to research products well before release, buy those products in their infancy, and spread the word about those products to their friends and family. The initial online reception of any product will likely sway whether they will purchase something or not, but this group of buyers doesn’t actually determine success or failure in the free market. Products live and die based on the whim of the general majority, and while that audience can be affected by early adopters they don’t need them to determine buying factors. In fact, there can be a pretty big disconnect between the two groups. Let’s look at a few examples.

First, an example of a product that has millions of early adopters and yet could be considered a failure thus far in terms of commercialization: the Wii U. Now, before you rush off to those comment boxes in order to tell me my opinion is invalid because you love your Wii U and it’s great, that’s exactly the point that I’m making — the Wii U and Nintendo have millions of passionate buyers who have not only gone out of their way to invest in the platform early, but actively spread the word on that product. That being said, the love for that product doesn’t change the fact the majority haven’t been attracted to it yet. To that point, the platform is a failure thus far despite support from early adopters, which isn’t to say it will be a relative failure forever. It could have a very bright future.

To this you might say something along the lines of, “but the Wii U has had horrible press and that would have affected sales adversely by turning off the majority.” Sorry folks, you’re only *almost* right about that. You see, the bad press mobile didn’t start running for Nintendo’s beleaguered system until a few months after launch when it was abundantly clear that the Wii U wouldn’t boast the same success of its predecessors. The majority or casual audience wasn’t even in the mix at that point. The launch of the system was lukewarm, and that was mostly due to terrible marketing and a poor explanation of features on Nintendo’s part. They failed to communicate relevance and early adopters didn’t take as well to it like they did the PS4 and Xbox One.

For the sake of fairness, let’s look at another product that suffered in partially due to online reaction affecting early adopters in its infancy and actually bounced back: the PlayStation 3. The PS3, at launch until about two years into its life, was something of an unmitigated disaster. The price ($599 US/$649 CND) was stupid, the launch games were awful, the gimmicks (sizaxis) weren’t well thought out, and PSN was incredibly shallow in its infancy. The critical reception of the online world was sharp and harsh from the get go. Early adopters were few and far between, and the majority wasn’t interested in a price that steep or the BluRay technology inside. It took a few price drops, reasonable SKUs, a better library, PS-plus, and two years for these systems to really fly off the shelves. The PS3 sold well over 80 million units and came back in a big way, despite its negative press — proving that poor online reaction can have an effect, but doesn’t actually determine success and failure.

I don’t think we should care at all about “early failure/success.” Who cares about how poorly or well a console starts? This isn’t a sprint, it’s a marathon. Early adopters are great, and yes they are affected by online reaction, but they ultimately don’t make a console successful. Mass appeal — that’s what it is all about.