While there may be a “New Age of Heroes” dawning over at DC Comics, there is a sense of familiarity with a lot of the properties introduced. Sideways feels like a mixture of characters and powers you have already experienced in comics, but by the end of the first issue there’s enough new and interesting things set-up for a promising future. 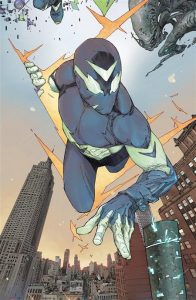 First, I want to say that I appreciate that Sideways #1 isn’t solely an origin tale. As a matter of fact, the story of how Derek got his powers takes up just two pages in the issue. Not that I have anything against origins, but it does allow the team an opportunity to further build it out over the series without hampering the momentum of the first issue with exposition.

That said, Sideways does a hell of a job conveying a lot of information both verbally and visually. Take for instance, the money shot of the issue, Derek using his powers in the climax to run away from a mysterious voice trailing him. It begins with Derek “entering” the panel at the stop of the page and as he walks throughout the page, you can see the little cracks in time and space he creates and different locations he visits before ending the page with him rushing out of the frame with only his feet visible.

In one page, over 4 panels, we are able to gain a sense of his abilities, his power’s ranges and the speed in which he controls it. It also conveys more about his relationship with his family and best friend, Ernie. When he is seeking asylum in a safe location, he doesn’t travel to his own home, but that of Ernie in his moment of desperation. I’m sure an avenue that the creative team will look to explore in the future.

Speaking of Ernie (short for Ernestine), we get to spend only a few pages with her, but she already seems like she will be a fun partner-in-crime and extremely handy as she designed Sideways’ costume. She has the spirit of an artist on display from her unorthodox attire to a room that is littered with collectibles and various costuming accessories about her room. Also she enters the book fully aware of Derek and his powers so it’s good to not have to deal with that dynamic of him lying or disappearing on her. While we spend less time we her, I am also curious to see how things shake-out with the presence of her twin sister. 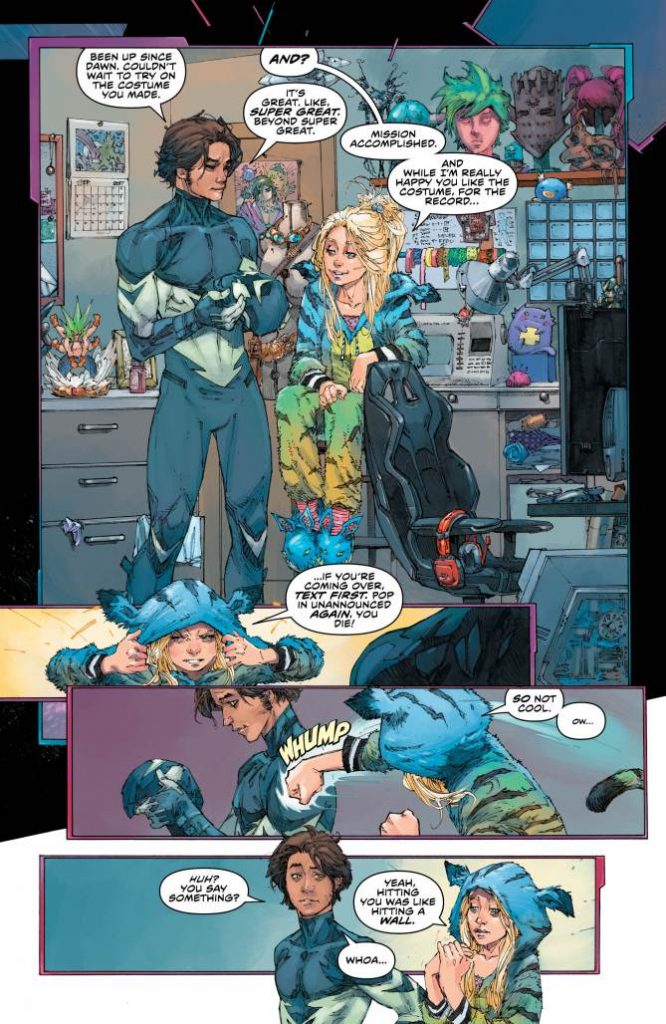 As for the costume she designs, it’s pretty nice taken as a whole. When I first saw it (and can’t imagine unique in this perspective), it reminded me a lot of Spider-man’s look. But looking at it in action, it is a lot simpler in design with just two main colors, which are a lot more muted than Spider-man’s. The design is also more focused on the abdomen then the chest and features a lot of functional “V” designs to mimic Derek’s powers. All in all, I’m pretty impressed by the look of Sideways. I think it will be a look that fans will embrace.

I wish I was as enthused by the look of the characters though. For the most part, most of the characters just look strung out. It comes down to the eyes and the shadows or bags underneath them. Perhaps, we are to believe that all of these characters are tired and stressed, and I would buy that but it never really seems to come across like that in the dialog. But that’s something that can be remedied with time.

At the start, I mentioned that Sideways reminded you of other comic book characters. Visually, his design hearkens back to Spider-man, and his powers are very reminisce of Nightcrawler’s. Though that may change in time, right now the only thing we know is he can open up portals to different locations in time and space and he isn’t always fully able to see where he is going. Giving us one of the book’s best gags. Also visually, his power seems to be an actual rift that he has to open, and sure that will come into play throughout the series. We also see briefly that he has super strength and seems a sturdier frame.

Review: 6 (Out of 7) – Some complaints with the looks of the characters’ eyes aside, Sideways #1 is a rock solid start. It has a visually fun power set and costume and ends in a way that looks to blow up the scope in short order.