Comic Review: The Wicked + the Divine #23 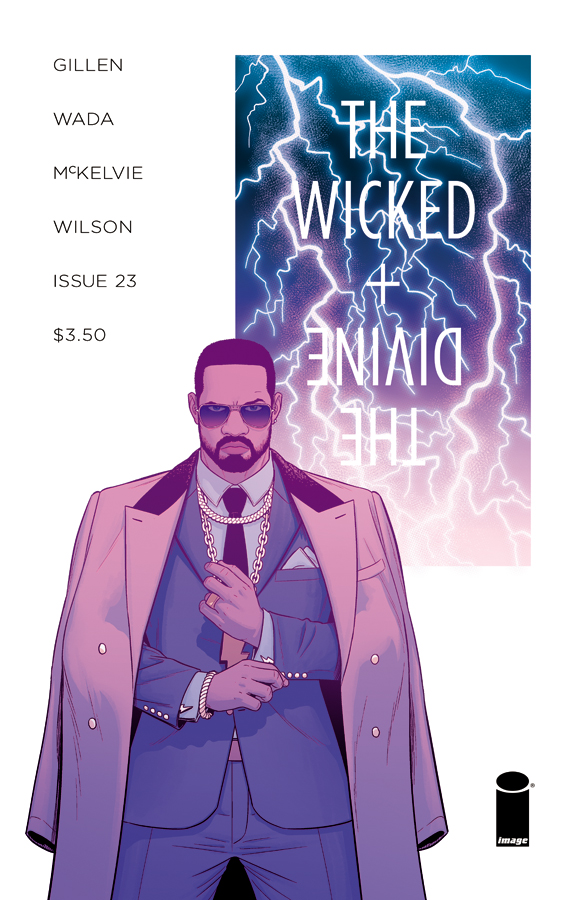 Throughout its 23 issue run, The Wicked + the Divine has experimented with the comics medium from WicDiv #8, which simulated a rave to “Commercial Suicide”, which was comprised of stories focusing on individual gods with guest artists, and WicDiv #14, an issue that consisted of “remixed” panels from previous issues of WicDiv. WicDiv #23 is the series’ most unique issue yet as writer Kieron Gillen commissioned the journalists Leigh Alexander , Dorian Lynskey, Laurie Penny, Mary HK Choi, and Ezekiel Kweku to “interview” various members of the Pantheon with Gillen supplying answers to their questions in-character as the various gods as part of an in-universe magazine called Pantheon Monthly. It also features the interior art debut of fashion forward cover artist Kevin Wada, who supplies full page illustrations that go with the interviews. And regular series artist Jamie McKelvie and colorist Matthew Wilson draw the magazine’s ads.

WicDiv #23 does an excellent job catching the flavor of the new post-Ananke death status quo as well as how the world of the comic perceives the gods of the Pantheon. Gillen really commits to playing the part of the gods in the interviews and showing how their characters have changed (or not) throughout the series. The comic truly immerses you in the world of WicDiv with the events of the series being treated as the latest scandal featuring a pop star or celebrity as intelligent journalists try to cut to the quick of these outsized personalities. The Baal one, which was conducted by Lynskey, was my personal favorite as Baal has somehow become the leader and father figure of the Pantheon while still being filled with swagger, violence, and power. It has a bit of twist ending as far as interviews go and an “exclusive” scoop about the Pantheon as Lynskey describes Baal as humble and immediately retracts his words.

But before Baal gets to be all swag dad and talk about how he was maybe a little too close to Ananke, WicDiv #23 leads off with the first ever interview of Morrigan by Alexander. The prose stylings of Gillen and Alexander are well 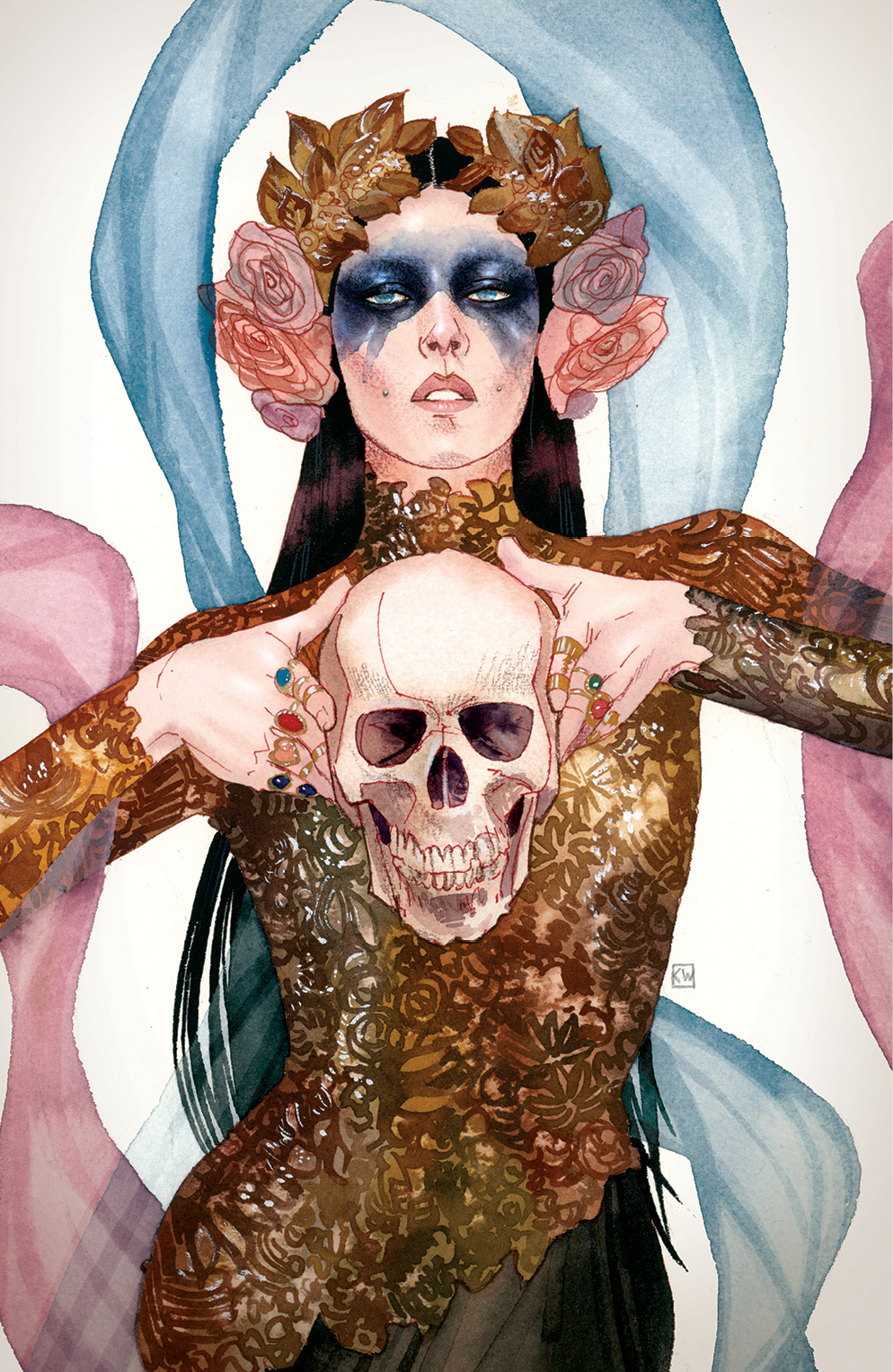 wrought and withering, like a long passage from a Gothic novel rather than a piece of journalism. Kevin Wada’s artwork is the living embodiment of “beautiful death” with red roses and skulls around Morrigan, who doesn’t switch to Badb or Gentle Annie during the interview. The article is an extended meditation on Morrigan’s impending death (Even with Ananke out of the way.) with occasional interludes for humor as the goddess jokes about her propensity for bad puns and being Gothic. The pieces switches over from an interview to personal narrative as Alexander reflects on how meeting Morrigan and had a harrowing effect on her. From its first appearance in WicDiv #2, the Underground has been the realm of danger and mystery run by Vampire the Masquerade LARPers turned divinities, and this interview reveals it as a kind of alternative world where Morrigan can be with her melancholy. Of all the Pantheon members, she truly embraces her mortality through her words, look, and domicile.

The other interviews are with Woden, Luci, and Amaterasu from Penny, Choi, and Kweku respectively. (Sadly, no word from Persephone because she probably has an incredibly important part to play in the upcoming “Imperial Phase” arc.) Penny’s interview with Woden is the funniest because she doesn’t want any of his sexist MRA bullshit, but Gillen (playing the part of an in-universe magazine editor) prods her onto the interview where she basically exposes as the ultimate geek, who objectifies women like a mid-90s Top Cow comic. While the rest of the Pantheon is partying or having a good time, he is tinkering with machines, including one that will help him “perform” like the other members of the Pantheon. But between the penis metaphors and snark, Alexander and Gillen get to the core of Woden, who thinks he doesn’t have to be a good person because he can get away with it. This is the definition of privilege.

Choi’s interview with Luci has a slightly skeptical bent with references to the Beatles and boy bands and their managers as well as her trying to explain away her cigarette lighting powers.  A striking passage in this interview is one about the whiteness of her suit that both sets up her image as the “lightbringer”, and that she has expensive tastes. Luci is all style in the interview, talking about her sex life, and various clubs that she likes to frequent, and she kind of gets the better of the journalist. It is nice to see the Prince of Darkness back in the comic after a three year absence and the absence of giant epiphanies about Luci is what makes her article so great.

Kevin Wada turns in some of his most gorgeous artwork in the form of single or double page spot illustrations in WicDiv #23. Much as the interviews try to get at the core of various Fantheon members, Wada does it through several iconic images. Through her flame red hair and softer clothing style, Amaterasu is depicted as the kind, loving Pantheon member while Baal is a total fashion icon with a double page spread of his various “looks” bookended by a lovely portrait of him and Inanna to show off his sensitive side. And Wada can do comedy too with his portrayal of Woden as Biggie, crown and all. Woden wishes he could get “behind the mic”, but he’s stuck letting his Valkyries doing his performances for him. He’s definitely not getting called Big Poppa.

In a comic that has examined the relationship between artist, critic, and fan between murder mysteries, bloodbath, and one-shots about Romantic poets, it is fitting that WicDiv‘s co-creator Kieron Gillen plays the role of all three in WicDiv #23 as he plays the part of magazine editor, plotter of this comic book that is mostly prose, and finally god. The roles he plays bleed together just like the “fandoms” of the Pantheon members inform their personalities and looks as gods from Amaterasu’s interest in Shintoism, Morrigan’s love for all things Gothic, and Woden, who is still a tech geek. Gillen, the team of journalists, and especially Kevin Wada capture their personalities in five “artist portraits” juxtaposed with Wada’s rich illustrations.

I guess the best way to describe WicDiv #23 is that it’s the most WicDiv issue of WicDiv that ever WicDiv-ed with something for the inner fan, critic, and artist in you. WicDiv is better than anything on TV or playing in cinemas currently.