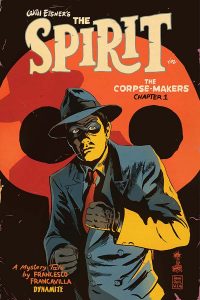 Francesco Francavilla goes full auteur in The Spirit Corpsemakers #1 spinning a lean, mean crime yarn that is dedicated to late Will Eisner and Darwyn Cooke. And this comic is yet another example of him being one of the great writer/artists with its fast, well-drawn cars, blue rains, and subplot about a man, who wanted to get out of the crime business and got literally yanked back in. Oh, and there is a masked crime fighter somewhere too.

The Spirit Corpsemakers #1 is a crime procedural story filtered through pure pulp fiction. The main plot centers around some killers, who are offing people who won’t be missed like homeless people and ex-cons, bribing the morgue attendants to not do an autopsy on the bodies, and hoping the police ignore them. And they do for the most part with Commissioner Dolan writing off the victims’ death as just another dead bum and telling The Spirit and his sidekick Ebony White to take the night off.

Francavilla plays to his artistic strengths as he and Sean Gordon Murphy (Punk Rock Jesus) are the best comic book artists of cars. His ability to give an automobile character as it powers through the highway in a double page spread makes a typical cops vs robbers shootout thrilling. Francavilla creates tension in the space of a spread as Ebony’s cousin Vin aka the guy who just got out of jail and wanted to be done doing criminal things goes on the run. He and Ebony share a pleasant meal about the good ol’ days when they were common, and Francavilla definitely creates a bond between them before the promise of a night at the movies turns into one last job. The light of the cinema marquee beckons hope and then turns to darkness just like the getaway car turns into the fake morgue van of the hooded serial killers that plague Central City later in the issue.

Francavilla should definitely get kudos for centering The Spirit: Corpsemakers #1 on Ebony White and his relationship instead of doing yet another story about The Spirit and his problem with femme fatales. (Those are fun though.) In the original Spirit comic strips, Ebony White was written and drawn as a horrendous racial stereotype, but in Corpsemakers, he looks like a regular young black man, who happens to drive a vigilante around and help him with his cases. And he has a life outside crime spending time with his cousin while the Spirit chills at a graveyard. Finally, to ensure that Ebony White isn’t going anywhere, Francavilla connects him personally to the serial killings as future issues while most likely explore the emotional effect it has on him.

The Spirit Corpsemakers #1 is a study in how brush strokes and shifts in color can create suspense and atmosphere and also a damn good start to a mystery from Francesco Francavilla that gives Ebony White some time in the spotlight. And the poster worthy title page (Done in melancholy blue, which happens to be the color of The Spirit’s outfit.) will have you salivating even before  the plot really kicks in.