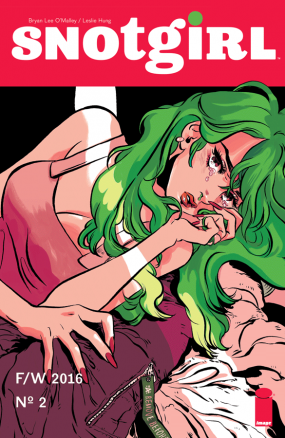 Snotgirl #2 picks up from last month’s as our protagonist Lottie (aka Snotgirl) is dealing with guilt and paranoia after she found her new friend Caroline (aka Coolgirl) dead in a bathroom after a night out. Most of Bryan Lee O’Malley’s plot is Lottie freaking out about being a possible murderer while trying to get her blog back on track and hanging out with her frenemies Cutegirl and Normgirl. Most of the comic is a lot of style with no substance behind it, but the back third of the comic throws in a reality bending mystery and a couple funny new supporting players.

Befitting a comic starring a fashion blogger with allergy issues, Snotgirl #2 has a gorgeous art style courtesy of artist Leslie Hung and colorist Mickey Quinn. Hung uses wavy, dreary lines for a lot of the issue to show how Lottie’s fast paced life as a fashionista has slowed down since she got paranoid and stopped turning on her phone as she spends her time holed up in her room and painting her nails instead of dancing or getting expensive coffees. And clothing is really important in Snotgirl as the outfit characters are wearing gives a hint towards their current attitude or what they’re thinking.

For example, the first scene in the issue features Lottie in a plain white and pink underwear set showing that she wants to sleep off the bloody events of last issue while still looking good doing it. And for most of the issue, Lottie wears a big jacket and hat as she tries to remain incognito in a pretty cliched way. Up to this point, Lottie’s life has been centered around people noticing her whether online or offline so she isn’t used to not wanting attention and has to lean on Hollywood’s ideas of “being disguised”. Except even while trying to avoid the police or her ex-boyfriend’s new girlfriend Charlene, she still manages to pair her bulky coat with a cute crop top and yoga pants. She still 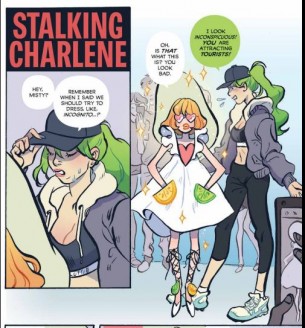 manages to blend in compared with Cutegirl, who wears a pastel watermelon dress and heart shaped sunglasses that make her look like Usagi from Sailor Moon. Cutegirl is all about the external and spends most of the issue mooning over new Instagram pictures while not caring about Lottie’s feelings. When Lottie runs into Charlene, she doesn’t try to shield or comfort her, but just is repulsed by the snot coming out of Lottie’s nose.

And Lottie’s allergies and neuroses make her a more down to Earth character in Snotgirl #2 as a counterweight to finding out that she’s not the greatest person because she pays her interns next to nothing to run her blog and doesn’t even remember their names. Lottie’s self-absorption reminded me of another Bryan Lee O’Malley protagonist, Scott Pilgrim, who doesn’t care that his long suffering roommate Wallace foots the bill for most of their apartment and takes forever to break up with Knives Chau after he starts to date Ramona Flowers. But he and Lottie are semi-likeable characters because they are both young people trying and struggling to create an identity in some way. Obviously, Lottie is more proactive than Scott with her fashion blog empire, and it’s a little sad to see this crumble around her even though it wasn’t built in the nicest way. And after she is talked over and passive aggressively insulted by Cutegirl and Normgirl (who she threw shade on last issue), you kind of feel like she needs a hug and some “real friends” as in the recent Kanye West song.

Snotgirl #2 is an ode to the fleeting nature of fame in the context of the Instagram age and even if most of the issue is Bryan Lee O’Malley, Leslie Hung, and the pastel happy colorist Mickey Quinn driving Lottie’s paranoid feelings home, it’s a stylish read with a wry sense of humor and the beginnings of an interesting mystery plot.