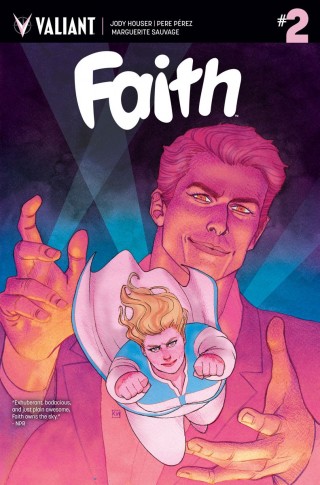 Faith #2 has quite a few standard superhero tropes, like the villain’s origin story, the final page reveal of the “Big Bad”, and the struggle with revealing one’s secret identity, but writer Jody Houser and artist Pepe Perez make Faith Herbert such a damn likable character that you won’t even notice. In the second installment of her ongoing series, Faith battles Chris Chriswell, her favorite hunky superhero actor, who happens to be a wannabe supervillain while also trying to process her rise from superhero fangirl to L.A.’s greatest superhero. It’s enjoyable to see a character continue to process her crazy reality through pop culture, and Perez’s fights are pretty well-staged. He also uses slight changes in facial expressions to change a character’s mood as Chris goes from being a blockbuster superhero to a sniveling, spouting supervillain. Houser also uses the fight scene to poke fun at how self-absorbed oPlus there’s a pretty clever Scott Pilgrim homage about halfway through the issue.

One thing that Faith #2 does well is creating conflict in the story through Faith’s personal life and not by having her fail as a superhero. In fact, she is pretty talented at the whole superhero thing using her companion field and knowledge of Chris’ lack of intelligence to bust out of a pretty weak death trap. Unless the Hollywood actor has secret mutant powers, he shouldn’t be able to beat an actual superhero, and Houser and Perez illustrate that fact by having Faith wipe the floor with Chris and his army of stunt doubles. (And there’s your Scott Pilgrim moment.) Her dialogue with Faith has a little swagger and sass to it too as she filters out Chris’ supervillain monologues with the equivalent of “Blah blah blah. Shut up so I can punch you.” along with pithy one-liners about how a bruise on his face means that he can wear a mask like his beloved Dr. Doom. Colorist Andrew Dalhouse uses blue as his focal color to draw our attention during the fight scene making the key component of both Faith and Chris’ outfits. This shared color represents Faith’s former crush on the celebrity 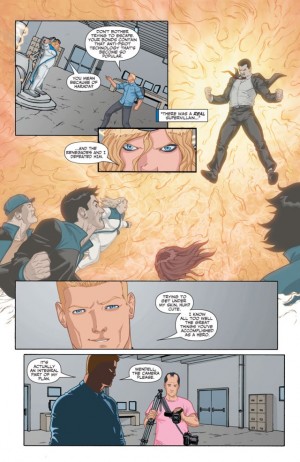 celebrities) on display in Faith #2. It’s not enough that Chris Chriswell has the opportunity to play this universe’s versions of Captain America, James Bond, and Luke Skywalker and get paid tons of money to do so. No, he wants to be a supervillain like his favorite fictional characters. It really shows that money and fame aren’t enough to satisfy you if you’re a bad person. This might sound moralizing, but Houser and Sauvage turn Chris into a dark mirror of Faith as both characters get “fantasy sequences” of their ideal life as a supervillain and superhero respectively. This is done a lot with heroes and villains in superhero comics, but Houser specifically hones in on the fandom aspects of Chris and Faith as they both create their identity through the media they consume for better and worse.

But Houser doesn’t just use Faith’s geeky interests to parade an endless array of pop culture jokes Big Bang Theory style, but uses them as a way to add depth to her character and relationships. Faith’s interests ground her and make her comfortable in a world where she has to deal with keeping her identity a secret, holding down a job where she has to write as both Faith and Summer Smith, and dealing with supervillains. She finds comfort in chatting with her friend about a Faith cosplay she is designing or just chilling out on the couch and watching Star Wars Episode VII. (Perez’s BB-8 is adorable.) Faith has been marginalized for her interest as well as her weight, but she uses these things to become an even stronger hero. And honestly I would geek out if I was a superhero and someone wanted to cosplay as me.

Faith #2 is filled with familiar superhero story beats, but Jody Houser, Pere Perez, and Marguerite Sauvage continue to develop Faith into a multi-faceted heroine filled with enthusiasm, warmth, and some doubts so you won’t even notice while you’re enjoying the comic.