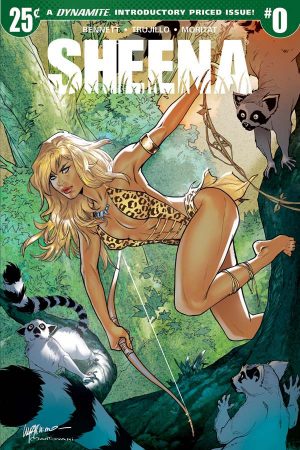 Sheena, Queen of the Jungle #0 is another example of how hard it is to reinvent pulp characters from the 1930s for a modern audience. In the comic, writers Marguerite Bennett and Christina Trujillo, artist Moritat, and colorist Andre Szymanowicz cast Sheena as the talking-to-herself defender of an unspoiled Amazon rain forest until she spots a kind of flying saucer drone while traveling one day. The drone goes down in an ancient, not-so-undisturbed temple, and Sheena investigates. That, and a bit of a creepy twist, is the story.

With the exception of the final page twist, which could end up being commentary on how these “jungle girl” heroes find it difficult to escape their original role as objects of consumption, Bennett and Trujillo don’t give Sheena much personality. She has a nice bond with her animal companions and moves agilely thanks to some fluid line work from Moritat, but there are no psychological insights into why she is so afraid of outsiders and what motivates her to protect the jungle beyond that being her character’s classic status quo. Sheena just acts and reacts and talks to herself a lot because there are no fellow humans for her to interact with. She spends pages on pages freaking out about defiling the jungle’s sacred temple, then sees a Nikon camera, and becomes cool with it she guesses.

The lack of an interesting main character or hook for new fans who want to check out Sheena is kind of a shame because Moritat’s artwork is fantastic, and Andre Szymanowicz captures the natural glow of the jungle. Moritat makes Sheena move like someone who has only known trees and clearings her whole life and not like an exotic pinup girl for ogling. Her eyes are passionate, yet innocent, and Sheena never doubts her decisions until she sees that a supposedly undefiled temple has seen a few visitors over the years. Moritat’s Sheena is almost always in motion climbing and jumping over vines and various structures as if she is one with the rain forest. It’s also cool to read a Dynamite book where the interior art is just as good as their striking covers, and art, colors, and an intriguing cliffhanger are really the only thing that Sheena, Queen of the Jungle has going for it.

In Sheena, Queen of the Jungle #0, Marguerite Bennett and Christina Trujillo do little to make the character unique or appealing or give her a motivation beyond what is spelled out on the title page. This is a shame because Moritat’s art is acrobatic and gives Sheena an enthusiasm and innocence to go with her sick flips and jungle parkour moves.

Overall: 4 (out of 7)– Sheena, Queen of the Jungle #0 shows that bringing back old pulp characters is a difficult task, but it has great Moritat art. She’s no punk rocker that’s for sure.