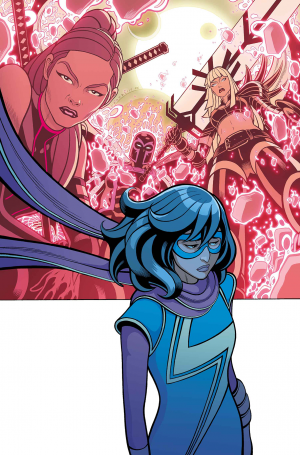 This is controversial, but I’m kind of digging the Secret Empire stories that are told from the HYDRA resistance’s POV. Secret Warriors #3 is definitely a comic that fits this mold. In this issue, Matthew Rosenberg, Javier Garron, and Israel Silva spin a tale of the Secret Warriors trying to get help from the X-Men to find a powerful, mysterious ally named Leer and falling flat on their faces because apparently, Inhumans vs X-Men was a thing. Even though Ms. Marvel is a good hearted hero, Rosenberg writes her as a foolish teenager in Secret Warriors #3 adding her to the great tradition of Marvel’s superheroes with feet of clay. Garron’s art is fairly realistic, but there is enough “bend” so the flurry of explosions, superpowers and embiggening.

However, colorist Israel Silva is the underappreciated MVP of Secret Warriors #3. There are a lot of flashbacks in this comics that deal with Ms. Marvel’s immediate reaction to the HYDRA takeover, and Silva connects them seamlessly thanks to the power of a clashing color palette. His color choices for the Jersey City flashbacks immediately put you in a down mood with the city and its people drowning in a sea of drab gray. Even Ms. Marvel’s costume is no longer bright, and she spends these flashbacks sneaking, hiding, and stopping would be vigilantes from blowing up civilians. But it’s not like the present day scenes are sunshine and rainbows. Silva puts nice pops of color into the costumes for Ms. Marvel and Moon Girl, but his take on the X-Men is less X-Men: The Animated Series and more the future scenes in X-Men: Days of Future Past

As the clever, hilarious Moon Girl says, internal conflict is a “superhero cliché”, but Rosenberg and Garron make it work because the conflict stems from the character’s backgrounds and motivations. Plus there is the fact that two groups of outsiders (Inhumans, X-Men), who should be teaming up against the super evil empire are fighting and blowing up each other’s planes. (Thankfully, the Secret Warrior-mobile is still intact for the sake of the road trip plot.) This is because resistance movements are more the arguing scenes in Rogue One than the star fighter scenes, or like the Allies fighting with the Soviet Union against the Axis Powers and then almost immediately going against them for decades during the Cold War.

And the conflict isn’t just contained to the Inhumans versus the X-Men. The Secret Warriors team themselves is pretty messed up with Quake and Ms. Marvel really butting heads in this issue. Quake is treating their hunt for Leer like a top secret SHIELD mission and is totally cool with slamming a door on her teammates and using her seismic abilities to get some information from a mad scientist from another dimension aka Dark Beast. (Or blowing up the X-Men’s plane because she’s pissed off that she’s not the only hero with earthquake powers.) Ms. Marvel is still trying to be a noble hero in super ignoble times, and so they end up knocking heads. Javier Garron brings a real energy to their arguments to go with Matthew Rosenberg’s sharp dialogue with intense facial expressions and some literal earth shattering. In fact, if it wasn’t for a timely cliffhanger, Ms. Marvel would no longer be a Secret Warrior.

Secret Warriors #3 shows the consequences of having the two big guns on a superhero team, or really any kind of team, having moral compasses that are oriented in opposite directions. Matthew Rosenberg’s writing is full of snark and spice, and we really get to know why Kamala and Quake act the way they do in this issue. Even if you’re anti-Secret Empire and HYDRA Cap, this comic is worth a shot because of its gloomy color palette, moral complexity, and hey, there are dinosaurs, explosions, and creepy mad scientists too.

Verdict: 6(out of 7) – Secret Warriors #3 puts a new spin on “heroes fight each other” by basing the conflict on character’s values and personalities. It also has a lot of explosions and earthquakes so action fans won’t be disappointed either.