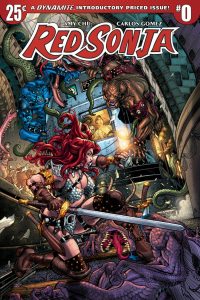 Even though it’s priced at $0.25, Red Sonja #0 isn’t worth your time and money despite the occasional bit of cute dialogue from Amy Chu and a halfway interesting if overused premise of a barbarian warrior out of time. The book lives up to the worst of the criticism levied at Red Sonja comics, which they’re T and A books, and artist Carlos Gomez doesn’t do much to dispel that theory with every other panel showing off Red Sonja’s “assets”. In Gail Simone’s run, she wrote Red Sonja as having a healthy sexual appetite for both men and women as she owned the chainmail bikini wearing it because it was comfortable. But, in this case, she is just a character for heterosexual male readers to project their desires on as she navigates a thin story featuring a great villain for a few panels, and her just narrating her way through the subway tunnel of a big city.

It seems like Chu, Gomez, and colorist Mohan were going for a more comedic tone by abruptly switching from a death defying battle between Red Sonja and the sorcerer Kula Gorath to modern day sewers. But there aren’t really many good jokes in Red Sonja #0, and most of the writing is her describing her strange surroundings. There are a couple kind of adorable moments like when she kisses her sword after being knocked out, or a rat is the first familiar thing to her when she reaches the modern world. But these are few and far between so many ass shots as it feels like we’ve been transported to mid-1990s Top Cow comics without a hint of irony about it.

Also, Chu makes Red Sonja a cipher, not a character in this comic. She is adventurous female warrior plugged into a rollicking fish out of water adventure with a side of magic equation without her desire to fight for freedom, her unbridled hedonism, and unwavering spirit. Only her aversion towards magic survives if only as a plot point to get her from the Hyborian Age to the 21st century. Red Sonja #0 plays like the opening cut scene of a run of the mill RPG with a sort of interesting battle between her and a monster before she ends up in the modern world after trudging through a sewer walking scene that seems longer than the one in Les Miserables.

With a paper thin plot, a focus on T and A instead of strong storytelling, and a promising skeleton of a concept without any meat on it, Red Sonja #0 isn’t worth picking up even if you’re a die hard fan of the She-Devil with a Sword.