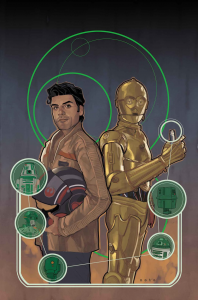 In Poe Dameron #9, everyone’s favorite space boyfriend, C3P0, BB-8, and the loyal X-Wing technician Oddy go to the hive of scum and villainy that is Kaddak as they look for a droid that has information about the location of Supreme Leader Snoke. And, on the First Order side of things, their imperial agent Terex returns rocking the colors of his old gang, the Rancs, and settles old scores with a former accomplice Wisper. Throughout this arc, Charles Soule and Phil Noto have made Terex into a kind of opposite of Finn, the protagonist of Star Wars: Episode VII, as he is a former stormtrooper and has codes, but wants the Empire to return to its full power in whatever way possible.

First of all, I love how Soule and Noto have turned C3P0 into the Varys of the Star Wars Universe in this arc of Poe Dameron even though he is super afraid of the word spy and uses “operative” instead in his usual overly polite way. And he’s a clever spymaster too using a Roomba-looking droid to get information on this other droid’s whereabouts. The stuttering in C3P0’s dialogue and the awkward facial expression on Oddy and Poe’s faces show how uncomfortable they are on a planet where getting thrown from a spire is a common occurrence. And a line about how Han Solo would’ve been old hat on this planet doesn’t help things either, but you can definitely detect a note of sadness from C3P0 because he and Leia are currently separated. Poe and his team are definitely way over their heads, and the closing events of this issue prove this point.

He’s still a Space Nazi with gang affiliations, but Soule and Noto continue to make Terex a fascinating character in Poe Dameron #9. Noto draws him like a regular guy just strolling around in the burnt reds of Kaddak, and some kids try to mug him when he turns around, and they immediately run off. Terex has a deep connection to Kaddak, and Soule unpacks this throughout the issue showing that it’s the home base of his first criminal enterprise: stealing ships from an Imperial base where he used to be stationed. (I had a full geek-out moment when Noto drew a whole page of docked TIE fighters.) In the flashbacks, Terex is awkward and hesitant while in the present scenes, he is a stone cold badass as he takes a seat in the cantina where the Ranc gang leader usually sits. Noto’s use of blues shows how cool Terex is in the situations and corresponds nicely to his confident demeanor.

Charles Soule and Phil Noto’s run on Poe Dameron has been a rollicking tribute to the action adventure serials that influenced the Star Wars films while also dabbling in other genres like crime and spy most recently. It also fills in a lot of gaps about the Resistance and First Order with plenty of the deadpan humor that Poe loves. Poe Dameron has dabbled in a variety of situations from dog fights to prison breakouts to vehicle chases, and issue 9 puts an old fashioned Mexican standoff on the table as Terex sheds his First Order stiffness to make an offer the Rancs can’t refuse. And it’s perfect that the comic ends with an icing…

The Star Wars Universe has been fertile ground for a crime saga with the prominent role of the Hutts in both the original Trilogy and sequels as well as the unproduced Sopranos-esque Star Wars Underworld TV show. Poe Dameron #9 definitely cashes in with its Godfather Part II story structure showing Terex’s rise to prominence, and his moves in the modern day that is about to collide with Poe’s super secret mission. Throw in the usual spaceships and aliens, and it’s a play of genres that Star Wars has been known for ever since George Lucas decided to transpose Akira Kurosawa’s Hidden Fortress to and recreate World War II dogfights in space.