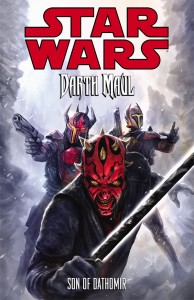 Dark Horse Comics is releasing the trade paperback for Darth Maul: Son of Dathomir limited this week. The TBP collects all four issues of the series, telling the story of Maul and Mother Talzin in their quest for revenge against Darth Sidious.

I’d like to start off by mentioning something I don’t normally got into (any) depth on–the covers. The art was done by Chris Scalf and shows off some really interesting and incredibly detailed hyper realistic work. I don’t normally tend to enjoy hyper realism in my comics (I’m sure we’ve all been over the Greg Horn nonsense), but these covers really stood out to me and had some great lighting work done, which really brought out the detail.

I’m afraid, however, I don’t have quite the same enthusiasm for the general art of the books themselves. It’s not what I’d call bad, and it could absolutely just be a personal indifference or even distaste for the style, but the art confused me more often than it resonated with me. Overall, it’s very heavy; heavy inks, heavy crosshatch, heavy shadow, heavy details. I often had trouble deciding exactly what it was I was looking at, or getting an accurate understanding of depth in the images without significant effort.

Expressions and details often got lost in the darkness, falling into the “distance makes faces just colors with black blobs on top” style that I never found an appreciation for. When there were close ups, which there were a good number of, the expressions were done quite well and really helped to add charge to what is definitely an emotionally potent story arc. Granted, most of those emotions are hatred, anger, and a tenacious pursuit of revenge, but still, it’s saturated with those nonetheless.

Colors also tended to be a bit flat for me, taking a mostly muted palette for the entirety of the books. Often you would be shown Dathomirian Zabrak and Mandelorians, all drawn in bland shades of yellow, red, and orange, donning grey armor and clothes, against a pale blue sky, with light gunmetal grey ships. The story spans a number of worlds, races, and locations both inside and outside various ships and structures, but the palette varied quite sparingly, despite the opportunity for diversity.

The story, as mentioned previously, is certainly a dynamic one. At this point, Darth Maul has been cut in half, gone mad, found by his brother (only to have his brother later be impaled by Sidious), and plenty more. He’s not what one would generally call a “stable individual with an easy life.” On the other hand, perhaps that’s why he seems to be such a fan favorite.

This arc follows the battles between the Sith (Sidious, Dooku, and Grievous) and the army of mercenaries lead by Maul and Mother Talzin. Sidious and Talzin have some significant history, it seems, ending with Talzin feeling used, betrayed, and thrown away… which is pretty much a calling card for Sidious at this point. That said, Sidious certainly does consider her a threat and feels it imperative to eliminate her to avoid any potential meddling with his plans. 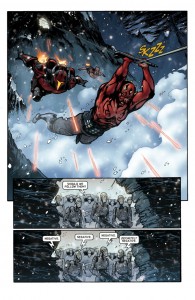 Don’t get me wrong, I’m all for some mental gymnastics, they are one of my favorite mechanisms to read–when they are performed well. In this particular instance, it seems more like every thing that happens is somehow exactly what the other side wanted to have happen, and that side thinking things were going according to their plan was what the other side wanted. By the end, it seems like they both just wanted the same thing, to fight each other. Man, I could have saved those guys some trouble and a bunch of soldiers/droids. They could have just sent a galactic email… something along the lines of “You and me, throw down at the swing set during recess. Bring your crew. I’ll bring mine.” Done. Or at least a shorter version of “they won’t know that we are bringing more guys, or I dunno, a bigger gun or something.”

We do have some Jedi action in here as well, although I’m not sure why. The Jedi don’t actually do anything, but it does set the stage for some potential future confusion regarding the identities of the two Sith Lords (even though, seriously, is it EVER just two Sith? Bane would be appalled by the sheer number of apprentices these days). Other than that, it’s just a little fighting. Tiplee shows up… briefly… in much the same fashion her sister, Tiplar, showed up in the Clone Wars animated series. I to this day still cannot tell you what race they are, but they do have some wonderful character design.

Anyway, the arc was decent, but not much of it was outstanding. The story seemed to drag on in this back and forth mind reading contest between Sidious and Talzin, when really they both wanted to just get going with the killing each other in the first place. The art strikes me as uninspired and occasionally difficult to grasp, as well. There is a good amount of action, though, and that’s worth something. If you’re a Darth Maul fan, I’d suggest considering picking it up, as you get plenty of the Zabrak with robot legs (JP would be jealous) running about and stabbing many a nearby being with his sword. If you don’t find much interest in the life and times of our horny fallen Sith, however, I’d suggest a pretty easy pass on what ends up being a mediocre limited.