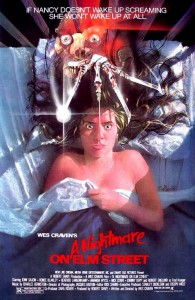 With seven entries, the Nightmare on Elm Street  series is one of the more prolific horror franchises, and series’ antagonist Freddy Krueger  continues to be an incredibly popular horror icon. To commemorate the enduring property, I will be revisiting the series over the next two months, comparing various aspects of the movies and seeing how well they have held up.

Released in 1984 (a full four years after Friday the 13th), A Nightmare on Elm Street was unlike anything else in the genre. The opening credits sequence, which shows Freddy Krueger constructing his iconic razor-glove, sets an effectively bleak tone, and things don’t lighten up much from there. We watch as the ghoulish Freddy (wearing his trademark fedora and striped sweater) torments a teenage girl named Tina in a fittingly surreal dream environment consisting of dank alleyways and hellish boiler rooms. After being cornered by Freddy, Tina wakes up relieved to discover that it was all a dream, though her shredded nightgown proves that she was in very real danger.

And there we have the gimmick that the series is famous for: when a character is killed by Freddy in his or her dream, they die in the real world. Being the evil undead sadist that he is, Freddy feeds off the fear of his young victims, terrorizing them night after night before finally killing them off in macabre, often imaginative fashion.

After Tina’s disturbing encounter with Freddy, she confides the story of her nightmare to her boyfriend Rod, who has been troubled by violent dreams of his own. Tina’s best friend Nancy and her boyfriend Glen express concern as well, and they all soon realize that their troubling dreams share a common element: a man with badly burned skin named Freddy. Shaken, but determined not to let the nightmares ruin their fun, the four friends decide to spend the night at Tina’s house together while her mom is out of town. 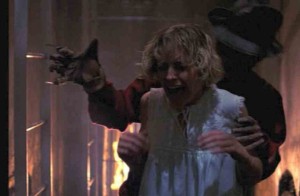 After spending some intimate time with Rod in a locked bedroom, Tina falls asleep and is immediately attacked by Freddy in one of the most memorably brutal murder sequences ever put to film. Tina is repeatedly slashed by Freddy’s razors while in the real world her boyfriend can only watch in horror as her writhing body is thrown against the ceiling. Nancy and Glen respond to Tina’s screams of anguish and break into the room, but it is too late – Freddy has claimed his first dream victim.

The rest of the film follows Nancy as she seeks out the truth behind Freddy Krueger and tries to prevent her friends from being killed by him. Nancy’s parents (whose knowing glares indicate that they seem to know more about the situation than they let on) lock Nancy away in her own house where she can do nothing as her remaining friends are targeted by Freddy.

As the sole witness to Tina’s death, Rod is imprisoned in a cell where Freddy hangs him with a bedsheet to make the murder look like a suicide. Glen suffers a much more over-the-top and memorable demise. After dozing off while watching TV, Glen is sucked into a gaping hole the forms in the center of his bed. Moments later, the bed vomits a sickening geyser of blood onto the bedroom ceiling for what feels like an eternity. Nancy watches from her bedroom window in stunned silence as paramedics arrive at Glen’s house with a stretcher (not sure what body there is remaining to put on the stretcher…), indicating that her boyfriend fell victim to Freddy.

In a moment of drunken weakness, Nancy’s mother reveals to Nancy the truth about the man who has been terrorizing the teenagers who live on Elm Street. Many years ago, a man named Fred Krueger was arrested for murdering more than 20 children, but was freed from prison due to a legal technicality. Demanding justice, a group of parents from the town (including Nancy’s own mother and father) tracked Krueger down to an abandoned boiler room where they trapped him inside and set the building on fire. Fred Krueger was killed in the fire, but his vengeful spirit would return years later to haunt the town’s children in their dreams. 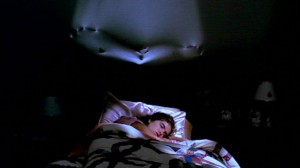 With a newfound hard-willed determination, Nancy challenges Freddy to a final showdown in her dreams. Setting an alarm timer, her plan is to pull him into her home in the real world, which is filled with booby-traps.Nancy’s plan succeeds, and in a scene that is unintentionally comedic, she uses the booby-traps within the house to pulverize Freddy with a sledgehammer and send him flying with tripwire explosives before dousing him with gasoline and setting him on fire. In final act of defiance, Freddy runs upstairs and attacks Nancy’s mother, smothering her with his flaming body until she is dead.

An exhausted Nancy resolves to no longer provide any fear for Freddy to feed on, which causes Freddy to fade away into apparent oblivion. Nancy steps outside to bright sunlight where she is greeted by her fallen friends and mother, who have somehow been revived. Nancy joins her friends in a convertible car and all seems well until a familiarly-patterned red and green striped roof begins to close around the convertible. Locked within the car, the teens scream in horror as Freddy’s gloved hand violently pulls Nancy’s mother into the house and the film ends.

All things considered, the first Nightmare has held up quite well over the last three decades. Some of the effects are a little rough around the edges, but Robert Englund’s gleefully maniacal performance as Freddy Krueger is as fun to watch as it ever was. The death scenes would escalate in creativity as the series continues, but there is no denying the fun in watching Johnny Depp’s character being turned into bloody bed-fountain. 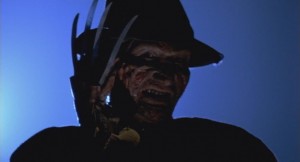 Best Kill: Tina’s bedroom death sequence is brutal and uncompromising, with imaginative effects used to make it look like she is struggling in mid-air and on the ceiling.

Rating: 6 (out of 7): A Nightmare on Elm Street is one of the most beloved and influential horror films of all-time. It remains an imaginatively horrific joy to watch.