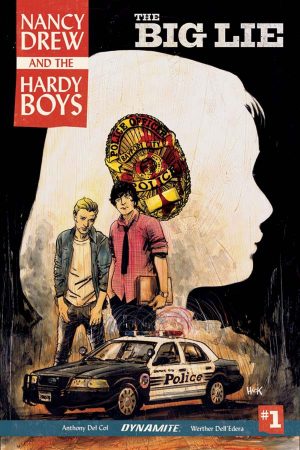 Nancy Drew and the Hardy Boys: The Big Lie #1 is one of those comics that I go from laughing at how ridiculous it is to stepping back and realizing that this is a damn good small town neo noir mystery. It’s like Veronica Mars meets Broadchurch, but is set the lobster obsessed, sleepy “postcard town” of Bayport. In a manner similar to Afterlife with Archie, writer Anthony del Col (Kill Shakespeare), artist Werther dell’Edera (Detective Comics), and colorist Stefano Simeone (Zombies vs Robots) take venerated archetypes of Americana and throws them into a fairly dark situation as they are in a holding room because the dumb as rocks police officer Chief Collig thinks that Frank and Joe Hardy killed their father Fenton, who had previously been arrested. Something is rotten in the state of 1950s traditional masculinity espousing dime a dozen mystery paperbacks that I famously called “the most boring books in the library” all the way back in Grade 3 and could probably fill a whole graveyard with the amount of ghostwriters it’s had over the years.

Similar to Francesco Francavilla on Afterlife or Robert Hack on Chilling Adventures of Sabrina, Dell’Edera and Simeone brings some top notch noir takes on the pretty beautiful house style for the covers of the old Hardy Boys and Nancy Drew books. The first page looks like a newsprint comic while Frank’s overwrought narration immediately tears down the idyllic setting of Bayport, which is honestly what Donald Trump is thinking of when he says “Make America Great Again”. Then, Dell’Edera and Simeone immediately bring the shadows, and the dark plotline begins to tick and doesn’t let up except for the hollow, nostalgic flashbacks, which are empty as the fake books on Jay Gatsby’s bookshelf. (The first Hardy Boys novel was published in 1927 and was racist as hell.) Their art drips atmosphere, and there are a couple tense sequences that would fit in a Sean Phillips or Francesco Francavilla drawn comic, like one of featuring a creepy corridor and a clock at a less than innocent shindig.

Del Col’s dialogue and narrative captions are wonderfully on the nose throughout the comic, and Nancy Drew and 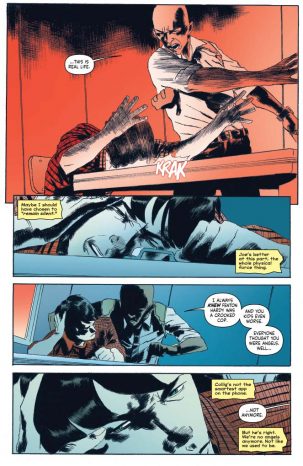 the Hardy Boys #1 leans on the . The Hardy Boys are insufferably knowledgeable about the conventions of detective fiction and police procedural and use this to troll the hell out of the cops, who have them in holding. Frank is the sassy one and gets smacked about the officer a little bit. Police brutality is no laughing matter, but the combination of Dell’Edera’s intense inking style with the officer basically telling Frank that he’s not in a paperback novel made me chuckle. Also, another cop shoots a mini basketball hoop and says “dame” unironically in a story that is supposedly set in the present day. These moments of comedy complement the self-aware, yet self-serious tone of the comic where (just like in the novels) the Hardy Boys are the sun by which the planets of random supporting characters, like the hard partying, still datedly named Bert and Nan, are just stepping stones on their journey to solve mysteries that they probably made up to kill time in their sleepy town.

Except Nancy Drew and the Hardy Boys #1 has a decent mystery plotline with Frank and Joe’s alibis not completely matching up for the officers because these bros were studying for the LSAT while the rest of their friends were playing Mario Kart, skinny dipping, or tipping cows.(Is that a thing in New England too?) Simeone even switches up his color palette using a brighter one for Frank’s more typical teen party story versus a darker one for Joe’s riff on the OG Nancy Drew novel, The Secret of the Old Clock. There’s a rift between the brothers, and the scene where Joe Hardy pulls up to a bar that seems to only serve milkshakes while getting random hate texts might be the comic’s funniest moment. But the blue color palette and big gutters between them when they part after the police interrogation kind of makes you feel bad that the world’s most overrated detective team broke up.

Overrated as in a few short pages, Nancy Drew steals the comic in shimmering fashion and has been pulling the Hardy Bros’ strings all along. There’s a reason why she gets top billing, and the final pages featuring her along with Werner Dell’Edera’s versatile artwork and Anthony del Col’s stylized and sometimes sassy writing definitely got me hooked on the Nancy Drew and the Hardy Boys series going forward. The comic kind of roasts the it would be hilarious if they wore Ed Hardy Bros, but also tells a dark, exciting mystery story in the vein of Veronica Mars, Brick, or a slightly less soapy Riverdale.