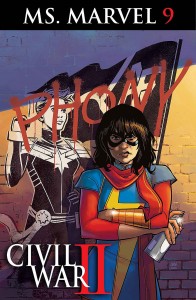 The new volume of Ms. Marvel has focused on Kamala Khan balancing her life as a superhero and Avenger and her life as a student, friend, family member, and citizen of Jersey City. Introduce Civil War II to the mix, and these two sides of her are in all-out war as Kamala has been commissioned by her idol Captain Marvel to lead a group of “Cadets” to capture and hold people in Jersey City without committing a crime. However, the “criminal” in question that they nab in Ms. Marvel #9 is Josh, a jock at her school, who started out mean, but helped out the people of Jersey City evacuate back in the “Last Days” arc set just before Secret Wars. Kamala is torn between wanting to support her friends and following Captain Marvel’s orders, and as the issue progresses, she gets more isolated, sad, and conflicted.  Because this is a serious issue, Takeshi Miyazawa dials down his overexaggerated manga style in Ms. Marvel #9 while using his skill at expression to convey a range of feelings in Kamala’s supporting cast. And speaking of the supporting cast, G. Willow Wilson’s  development of them over 28 pays off in both a happy and a sad way beginning with an opening flashback drawn by Adrian Alphona and set in Pakistan while Kamala’s mother is pregnant with her.

Alphona’s art is restrained yet powerful in this cold open filled with stars, destiny, and woman doing incredible things. Superheroism truly runs in Kamala’s blood, and I’m not just talking about the Inhuman DNA. We also find out the significance of the bracelets that Kamala has been rocking as part of her superhero costume as a physical reflection of her family’s values that they have carried from Mumbai to Karachi and finally Jersey City. However, Wilson does a little bait and switch cutting to the present day and having Kamala and her highly annoying group of cadets detaining Josh, who might burn down the school because his girlfriend Zoe broke up with him. The rest of the issue is 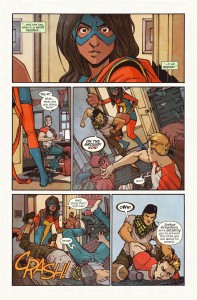 Kamala dealing with the “Junior Fascists” and simultaneously trying to be nice to her friends and also follow Captain Marvel’s orders. It’s kind of a depressing read as Captain Marvel cares more about her ideals than Kamala’s problems, and Kamala grows more distant from her friends and family. The knockout blow comes from the fairly quiet Nakia, who has been her best friend since Ms. Marvel #1, as she says “We’re not Ms. Marvel’s friends. We’re background characters”. Ms. Marvel has spent so much time trying to impress other superheroes that she forgot about the people who have been rooting for her since day one. But Wilson and Miyazawa show that change is on the way starting with a killer cliffhanger.

But even though Miyazawa draws Ms. Marvel as more big and threatening (Ian Herring uses bright yellow backgrounds to represent Ms. Marvel’s misuse of her power.) and less humorous in this issue, he and Wilson still find time for an amazing moment of self-realization. They take a break from the world of profiling, fallen heroes, and moral dilemmas to have Zoe Zimmer, who initially began as a racist cheerleader, come out as lesbian to her ex-boyfriend Josh and hint that she has feelings for Nakia with a deft switch of a panel. Even though Ms. Marvel #9 is in the middle of a crossover, Wilson still has time to write Kamala’s supporting cast like multidimensional people with goals and feelings even if it’s Abu waking Kamala up at the kitchen table after she’s fallen asleep after a long day of wrangling the Cadets.

Under the backdrop of Civil War II, G. Willow Wilson, Takeshi Miyazawa, Adrian Alphona, and Ian Herring craft the story of a teenage girl coming to terms with becoming her own hero as her mentor starts doing things that go against her own beliefs and against the people she has saved time and time again. Ms. Marvel #9 is a real turning point for Kamala Khan’s heroic journey, especially after the mysterious final page,which is the counterpoint to the hopeful flashbacks featuring her mother and grandmother in Pakistan.