I’m one of the biggest opponents of DC Comics’ overuse of Batman, but at the same time setting things in and around Batman’s universe has a lot of interesting perks. One of my absolute favorite comic series of all-time is Gotham Central, which as the name implies, is set in Gotham, but deals with the police force and how having someone like Batman affects them and their job. 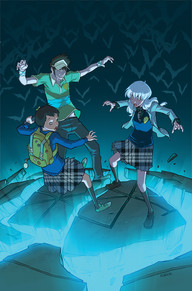 I say all this because Gotham Academy is yet another book set in the universe of Batman, but with a hook, as it focuses on a brand new set of characters in a school located in Gotham. While we got tastes of something like this with Tim Drake’s Robin book, there are little superheroics to be found here. If anything, this book is closer to Harry Potter than it is to Batman.

And for me that totally works. I love Harry Potter. I love Batman. Why not have the best of both worlds.

This is the fourth chapter in this book (if the title didn’t give it away) so we are familiar with the ebb and flow of the series by now. The main players are Olive Silverlock and Maps. They are trying to explore and discover the secrets of the school while navigating life in the academy. This issue starts with Olive discussing the possibility of resurrecting one of the spirits that reside in the hall.

While this mystery is solved by the end of the book, there are others that open up. Including a cliffhanger that made me excited that this was set in Gotham because where else would that ending be a thing.

The book also has an unique style to it. The book has an energy about it that gives their character more life than your typical comic. A focus is given to their body language and especially their facial expressions because that is where the bulk of a person’s conversation comes from. As the star, Olive gets a ton of close-ups and single panels to really drive home what she is feeling.  I’m not quite sure the term for it, but I do like how so many of the images in this book are bathe in the light of the page whether its Olive slipping down the steps in the glow of the orange or chasing ghouls in a blue shadow.

More than the plot and the mystery, the thing that has kind of hooked me on this book since day one has been the characters. While a lot of them are your typical tropes, it is such a different book from the big 2 that you feel like you need to champion it. I mean how many books are catered towards the youth audience, and how many of them are actually interesting for adults? This book walks that fine line but makes it seem so easy.

And it kind of makes me feel like a teenager gossip as time, like who is that mysterious guy and does Olive have the hots for him? Only one way to find out and that’s tuning in next month!