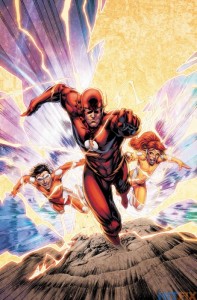 Written By: Tony Bedard
Art By: Sean Parsons & Tom Grummett
This issue starts a year in the past and Wally West is the Flash, and in Gotham City. He and his kids are running toward another speedster’s signature and it feels like Barry Allen. In the present Wally is stuck in a bottled Gotham City, once the sky was blotted out every superhero lost their powers. Suddenly a voice overhead tells them that each city will battle the other for survival. The dome is lifted and Wally regains his powers. He runs through various cities trying to find a way back to his Gotham when he meets another speedster called Fastback part of the Zoo Crew. Suddenly Wonder Woman appears and is ready to battle The Flash.
The idea of the Convergence story is interesting, especially when it comes to the Flash. This issue allows the reader to see some interesting characters in these alternate cities. The idea of Wonder Woman running off to battle works, hopefully Wally can reason with her or Barry will some how save the day. The art was just average for the issue, it felt like Wally running though the different cities was a bit of a missed opportunity.
Overall, these stories will all be quick which makes it hard to get invested. It was nice to see Wally take the lead in this issue and hopefully the battle against Wonder Woman is exciting.
Review Score: 3 (Out of 7)