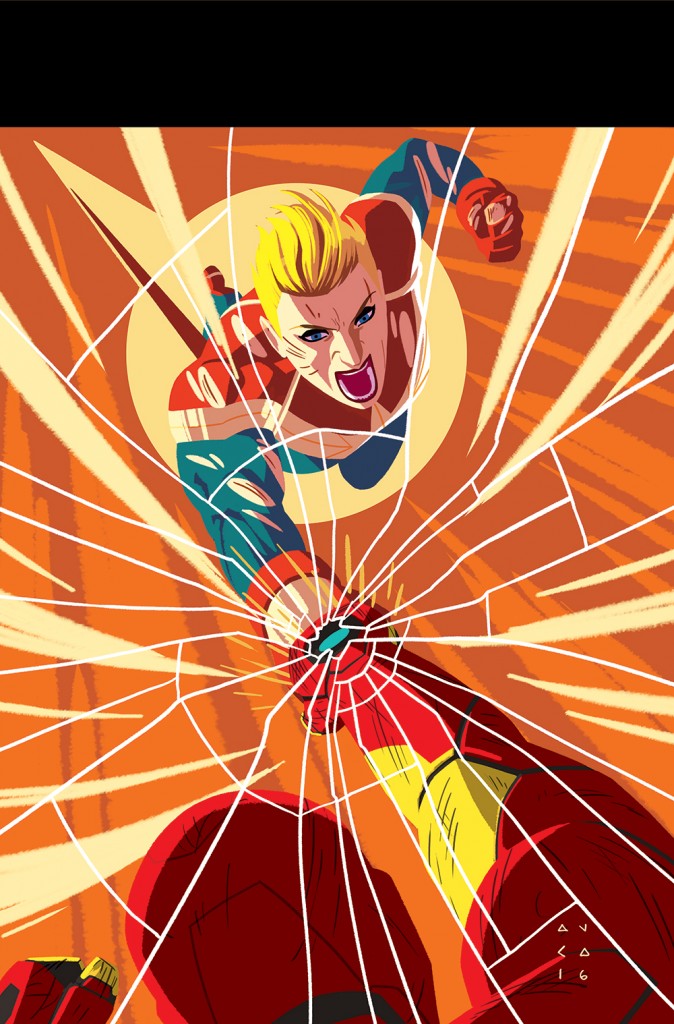 Captain Marvel #7 is the perfect companion to Carol Danvers’ actions in the main Civil War II comic where she wants to use the Inhuman Ulysses’ power to see visions of the future to stop threats before they even happen. She stands against Iron Man, who has done research on Ulysses and thinks his visions are biased and not  completely true. Writers Ruth Fletcher Gage and Christos Gage show that Carol didn’t just get to use Ulysses’ visions to prevent the future from happening because she wanted to, but had to go through an intergalactic committee (Alpha Flight Board of Governors) to get authorization. The plot of Captain Marvel #7 is her hearing before this committee, and she tries to persuade them that Ulysses’ powers to predict the future have saved lives and tie in to both the Ultimates and Alpha Fight’s goal of being “proactive” towards threats to Earth. And along the way, the Gages delve into her personal feelings about the death of Rhodey and She-Hulk’s injury, which makes her a more sympathetic figure even though this reviewer is definitely Team Iron Man for now.

Marco Failla (Spider-Man and the X-Men) fills in for series artist Kris Anka and with the help of colorist extraordinaire Matthew Wilson does an excellent job flitting between various flashbacks and the hearing. His work isn’t as detailed as Anka, but has some raw power especially when Captain Marvel faces off against Dr. Minerva, which was an anecdote Carol told the committee to show a time when Ulysses’ vision worked with zero casualties. Dr. Minerva is a dark mirror to Captain Marvel, and her transformation into a Kree-DNA infused monster is pretty jarring and show that she’s a legitimate threat. Wilson also gives her a muted version of Carol Danvers’ original Ms. Marvel costume from the 1970s to further show this twisted nature. Showing the battle between Captain Marvel, is much more effective than relying on dialogue and talking heads in a courtroom as through yellow star punches and cool superhero poses, the Gages, Failla, and Wilson persuade us that Captain Marvel is an excellent leader and superhero.

And the dialogue heavy courtroom scenes aren’t boring in the slightest as the Gages give Carol, Black Panther, Henry Gyrich, and Alpha 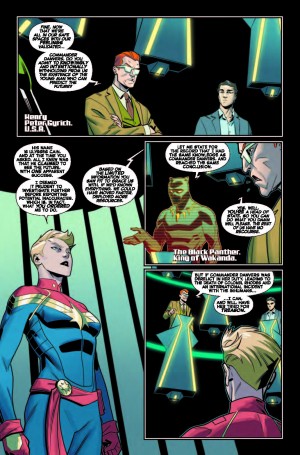 Flight leader, Philippe Beaulieu their own motivations and role to play. For most of Captain Marvel #7, Gyrich is the antagonist, which is keeping with the past three decades of characterization as he tries to keep superhero groups, like the Avengers and X-Men, under strict government oversight and was a big proponent of the Initiative program back in Civil War. Every time he opens his mouth, you think that Captain Marvel is going to become an outlaw, and he constantly places her on the defensive even  undermining Black Panther when he says that as a monarch that he doesn’t have as much accountability. This verbal battle with Beaulieu acting as a swing vote is more exciting than any punch-fest, and Captain Marvel’s acquittal and basically promotion definitely seems earned by the end of the issue. Failla captures her passion for being a hero, sense of duty as a military officer, and love for Rhodey through a close-up of her closed eyes as she talks about him and then cutting to a defiant face as the meeting adjourns. The red, blue, and gold of her uniform is a touch of idealism from Matthew Wilson in panels that are mostly black and eerily green like his palette for Woden in WicDiv.

My takes on the two sides in Civil War II is that Iron Man is a jerk for a cause I believe in (No profiling/extra surveillance.), and that Captain Marvel is incredibly charismatic and passionate about a cause I don’t. Captain Marvel #7 shows how the sausage is made, and the hard work that Carol Danvers had to put in to defend her use of Ulysses to prevent future disasters before a pretty unsympathetic committee and also the personal toll that it has taken on her. The final page (which is mostly Failla art with some captions and a line of dialogue from the Gages) really nails this portrayal of her as she looks at the stars before wiping a tear away and looking at the heroes she’s recruiting for her initiative.

Captain Marvel #7 expands upon Carol Danvers’ motivations in opposing Iron Man in Civil War II and shows the hard work she put in to continue to use Ulysses to counter future threats. Ruth Fletcher, Christos Gage, Marco Failla, and Matthew Wilson also give us insights into her personal feelings about Rhodey’s death, and how she acts on those emotions going forward. This issue is a solid pickup for anyone who wants some added layers of characterization in Civil War II as well as for Captain Marvel fans, who want a deeper look into her recent actions.