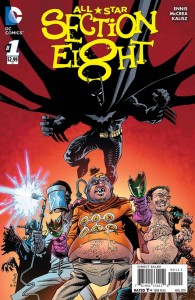 As I struggle through the I-don’t-know-which draft of this review, trying to put a coherent thought together after what I just read, I once again fail to capture the true feeling of All-Star Section Eight. Most DC comics are about powerful heroes, dangerous villains and action-packed adventure, but then again Section Eight is not like most DC comics.

The story is the drunken fever dream of Sidney Speck, an alcoholic art critic who has just tumbled publicly and violently off the sobriety wagon. He drinks himself into a stupor and from that point on, while he’s off doing who know what in the real world, we follow him through his baffling and incoherent imagination as he becomes the quite-unlikely, self-aggrandizing superhero Six Pack (who of course has a massive beer gut). His goal: to re-create his old team Section Eight and stop “the threat” – whatever that is.

The art falls somewhere between Tim Burton and Ren and Stimpy. It’s random, gross, surreal, and juvenile. Every frame is saturated with oddities and various bodily fluids. Hats float just above the heads of their wearers, clearly inhuman creatures work as bartenders (in this case a screaming, worm-faced demon Groot from hell) and everybody’s just cool with it, and perhaps a bit too much effort is put into drawing the bulge in Six Pack’s pants (and the liquid constantly dripping out of it). Everybody and everything is disgusting, chaotic, over-dramatic and oddly petty – unless it’s in the background, in which case it looks like it belongs in a Batman comic.

Which is fitting, seeing as the Dark Knight himself makes an appearance halfway through. Like all the other characters, his arrival is sudden and purposeful to the plot (of which there is little), but then he quickly falls into a deranged tangent (much like the ramblings of a real-life drunken alcoholic). That being said, Batman’s comedic over-reaction to receiving a parking ticket is by far the best part of the comic. Where, if anywhere, is the writer going with this? I’m sure I have no idea.

And I’m equally sure that I’m out of things to say. It’s weird, it’s gross, it’s unlike anything I’ve seen in DC. If you’re the sort of person who’s into Duckman, then this may be the lovingly produced madness you’ve been waiting for. If not, then maybe borrow this comic from a friend and skip to the Batman scene. It’s definitely worth it.