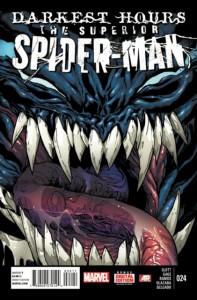 Last issue we saw the Venom symbiote become one with Superior Spider-Man this time we actually see what he becomes and how he reacts to it. Peter decides now that he is going to be the Superior Venom and wants to take on any crime in the city no matter how small himself to show off his new “power”. He is having trouble controlling the symbiote and his emotions especially when he goes to visit Aunt May. He tells her off for being rude to his girl friend, something that got very out of hand. Meanwhile, MJ is trying to warn Aunt May that Peter is not right and when she arrives she sees Peter and pulls him aside, this is when Venom shows him self and he runs off. MJ takes it upon herself to call in the Avengers. Meanwhile, the Goblin war had a bigger role to play this issue and we will see what happens now that they have their newest “member”.

First off, the art was so exciting this issue, Superior Venom looks amazing and the detail looked great. The issue really was exciting and its interesting seeing how the symbiote affects Otto but in Peter’s body. The only problem with this issue is there is just way to much going on, there are several different stories all happening at once, and it really feels like it jumps around.

Overall, anything with Venom can make for a fun time. This was a cool take on Otto having that power and it will be interesting to see how it ends in the double sized #25 issue. Hopefully the Avengers can come in and start helping Peter make his true comeback, but only after Otto ruins his life with the goblin war. 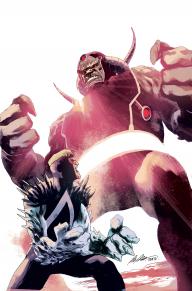 Buddy finds himself on another planet battling some strange beasts, he has trouble connecting to the red and finding an animal to help him emerge victorious, that is until he taps into his opponent and wins the fight. After he is introduced to The Bridgewalker who explains that The Red, The Green, and The Rot expand beyond earth and are connected though the planet he is on. He learns that by winning the battle he was picked to become the new Bridgewalker and his training is going to start right away. Buddy makes a deal to go save his family and then he will take over the role.

This was a very unique issue that really opened up the world of the Red, Green, and Rot. The issue felt kind of out of place to the ongoing story without seeing Buddy’s daughter. This worked because buddy was on a distant planet. The layouts and art style worked very well in this issue and the amount of detail in the art allowed the reader to get a feel that buddy was in a unusual place.

Overall, this issue could be the beginning of the end for Animal Man which ends in March. This issue showed us where Buddy is headed and while it will be sad to see a quality book go at least the story will be exciting and give the readers a quality conclusion. 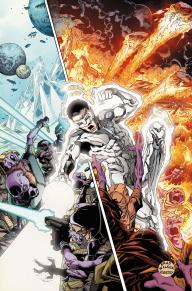 Kyle is still with the new guardians on his special missions trying to do things to help the universe as the White Lantern. He is still on the paradise planet that steals the happiness from the other dimensions to have their world be perfect, that is until the barrier breaks and one of the creatures who lost their happiness wants revenge. Kyle, Carol, and the new Guardians do what they must in order to restore the balance here.

It is interesting seeing Kyle act as this super lantern and off doing these special missions. This one really had an interesting idea but the whole overall story fell kind of short, and at times was a bit confusing. The backgrounds and alien world looked great, but at times Kyle’s art seems a but weird. The moment at the end is what is the real interesting part in the issue and hopefully we get to see a bigger picture story for Kyle in the future.

Overall, Green Lantern New Guardians needs to establish itself apart from the other Green Lantern titles until a time when Kyle and the Guardians are needed, otherwise this just seems like the white lantern going off and saving different areas of the universe. If there is a bigger overall picture and direction then this book could become very interesting.