I downloaded the game today from the Wii U eShop and played for a little more than an hour. Here are some early impressions and thoughts.

First thing first, the overall presentation of the game is pretty basic and barebones. The game’s menu is broken into games with a plain background. That’s about the sum of it. The menu’s music is pretty snazzy so that’s a plus.

From the menu, you have access to the games’ challenges and Remix Tour, ability to post to Miiverse, check out your stamp collection and an eShop link that takes you to the specific game on the Virtual Console. Like I said, pretty basic. 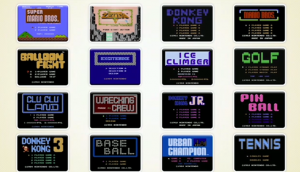 The game itself is broken into two types of “challenges.”

First is NES Stages, which are game-specific challenges for a bit-sized portion of the original game. As far as I can tell uses the original assets just breaks it down. So far I’ve done all of Donkey Kong and some of Balloon Fight.

For Donkey Kong, some challenges are as simple as jumping over a set number of barrels or clearing a certain amount in a single jump.

Balloon Fight has challenges like getting 10 balloons as quickly as possible or knocking out enemies before they have a chance to take off.

Pretty simple, but fun and a nice set of variety and tends to get harder as you go on.

As a reward, you get two things.

Stars- Based on your speed, you get anywhere from 1-3 stars. If you beat a stage under a certain amount of time you get rainbow stars! Doesn’t do anything but gives you bragging rights!

In addition to that you get “Bit Points” which is based on performance (completing a stage for the first time, finishing a perfect run, setting a new time) and this is used to unlock the stamps in the game (There are 100 of them in the game) Stamps can be used on Miiverse if you can’t draw (like yours truly)

The other part of the game is “Remix Stages” which features enhanced graphics (basic improvements, but notable and they look nice) and offer a lot more variety in challenges and levels.

If you saw the trailer from earlier today, you know one of them is playing as Link in Donkey Kong, and if you know Zelda games, you know that means he can’t jump so have fun avoiding those barrels!

Another one turns Mario into an endless runner where you need to time your jumps to clear obstacles and avoid cheep cheeps.

The original Mario Bros gets a Double Cherry power as you control two Marios at once while trying to collect coins.

Donkey Kong Jr stage has the stage vanishing for periods at a time and you need to know the stage inside out to really complete it.

I think Remix stage are the more intriguing elements of the game for me as they offer up a lot of different things and changes while NES Stages are cool they are just pocket-sized pieces of the original games.

The game sells for $15 on the eShop, which may be a sticking point for some. Personally, I feel like $10 would have been the sweet spot for this package.

Value is hard to determine for this game, but it does seem like a fairly meaty package if you don’t mind the smaller sized aspect of the game. It is a ton of fun, and I hope to see the brand expanded on in the future.