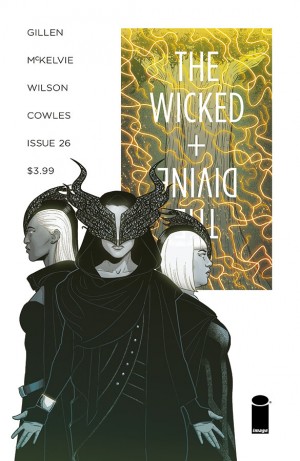 Writer Kieron Gillen and artist Jamie McKelvie hit on a nice structure in a half action, half roundtable Council of Elrond talking issue of The Wicked + the Divine. WicDiv #26 opens with the first skirmish against the Great Darkness as McKelvie goes full superhero artist with Amaterasu doing heat vision like Superman and traveling through light waves like The Ray or some other obscure hero I’ve forgotten. But this display isn’t empty spectacle because Gillen’s writing for Amaterasu has her think like she’s a character in Buffy the Vampire Slayer instead of a player in a morally grey and complicated universe that lacks structure since Ananke’s passing.

The debate in the Pantheon’s meeting (It’s nice to have the whole squad back.) doesn’t just center around an upcoming battle against great evil, but ends up being a conflict between order and chaos, rationalism and absurdism, and if you want to trot out literary criticism, structuralism and post-structuralism. Some members want to just live out the rest of their life doing what they please while the others band together to research and fight the Great Darkness. These two opposing views are illustrated in McKelvie’s layouts as most of the meeting is done in nine panel grids while Persephone’s deciding vote for “anarchy” is less structured with her face, hair, and tendrils disrupting the usual grid. The debate and resulting vote reveals a lot about each Pantheon member, and characters who are usually diametrically opposed end up on the same side like Woden, Urdr, and Dionysus.

Yeah, he doesn’t get to be super angry and dramatic like Urdr, Baal, or Persephone or play a big part in the action sequence like, but Dionysus gets some stellar characterization from Gillen and McKelvie. Even though Dionysus from Greek mythology is perceived as a non-stop partier, his WicDiv counterpart is more concerned with giving other people a good time even if it leads to sleep deprivation and red eyes. The world sucks, and he makes them feel better for a brief moment on his dance floor. This selflessness applies to his vote as he decides to be smart and learn about the Great Darkness instead of charging into battle and risking casualties or just doing what he wants. Also, the LGBTQA spectrum continues to be well-represented in WicDiv as he comes out as asexual to Urdr because some people aren’t motivated  by or into sex, and that’s cool. 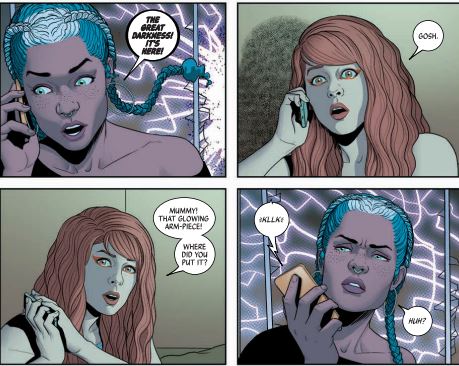 The philosophical debates and appearances of every WicDiv god don’t detract from Kieron Gillen’s solid construction of character arcs for Baal and Persephone that bear real fruit in this issue. True to his flashy, powerful self, Baal is the MVP of WicDiv #26 and even gets to quote the great DJ Khaled in the process. McKelvie goes full pop art meets screen tone with his lighting powers, but then softens him up as he immediately hugs his siblings and reassures his mom, Ms. Campbell, after beating up the Great Darkness. In the past, his face has beamed confidence and swagger, but Baal breaks that tradition and gets a little torn up about the Great Darkness, who was responsible for killing his father. His old rage returns when Persephone votes against fighting them, but is replaced with a tinge of sadness as Persephone decides to leave him because she doesn’t want to hurt him. Breakups are hard even for sky deities and would be Destroyers.

Speaking of Destroyers, people other than WicDiv readers start to realize that there is potential for danger and destruction in Persephone. Woden not wanting to give her a say in the Pantheon vote about the Great Darkness comes off as dickish more than anything. However, it’s a little more surprising when her friend/New Year’s Eve smooching buddy Amaterasu calls her a “baddie” because her powers didn’t really affect the Great Darkness. There’s also her cold manner towards Baal, disdain for Urdr (Who gets on everyone’s nerves in this issue.), and act of destruction at the end of the comic. Wrecking cool motorbikes is definitely a gateway drug to wrecking the whole world. But if Laura seems like anyone in WicDiv #16, it’s Luci, especially when she invokes “Do what thou wilt.” And Luci would probably be proud of her commitment to chaos at the comic’s close. (And make fun of my overuse of alliteration.)

Like the majority of Pantheon members, Matthew Wilson embraces chaos with his color choices for WicDiv #26. He adds power and weight to the issue opening fight scene with fragments of purple when Baal brings the lightning down on the Great Darkness to not so happy green when Persephone gets and bright red yellow justice of the sun as Amaterasu wants to take out the Great Darkness, no deliberations needed. The red yellow of Amaterasu finds its counterpart in the angry orange of the explosion from Persephone’s bike. They are a study in dualities:  order and chaos, heaven and underworld, giving a shit and not giving one, and Gillen will probably utterly dismantle their friendship and make everyone cry while watching old Kate Bush videos.

Kieron Gillen, Jamie McKelvie, and Matthew Wilson hit that lovely sweet spot between action and characterization in WicDiv #26 while adding a little madness to what is definitely not going to be a straightforward flawed people put aside their differences to fight a greater evil narrative and ransacking character relationships in the process. Also, there’s something plain fun about supremely attractive beings (Amaterasu slays with her wing tip makeup.) debating philosophy.