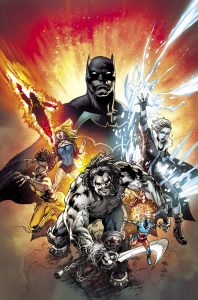 Some things in the world are a special brand of fresh and pleasant and new. Like the minutes before the first game when your favorite football team is undefeated until kickoff happens, and they inevitably lose a few too many. Or that moment at a restaurant when you’re starving, and you can see the waiter bringing your delicious food. To go with these two tantalizing things, there’s the announcement and recruitment of a new superhero lineup. You get excited about the classic, or wacky and new in JLA Rebirth #1’s case, combination of characters you love, know nothing about, or detest and dream about their upcoming adventures, personality clashes, romantic pairings, and splash pages.

And instead of spreading out the new team’s creation over five or six issues and combining it with a villain plot, writer Steve Orlando uses all the pages of JLA Rebirth #1 to build his superhero team culminating in a powerful Ivan Reis, Joe Prado, and Oclair Albert splash page. The personalities of The Atom (Ryan Choi), The Ray, Vixen, and Killer Frost have already been established in various one-shots, but Orlando stirs them together having them interact one on one and as a team.  As former villains, Killer Frost and Lobo are definitely the wild cards of the team. Frost is sent to recruit Black Canary and doesn’t get to say two words until the two are locked in mortal ice/martial arts combat, which gives Reis a chance to draw pretty compositions of broken ice when Dinah uses her sonic scream. Killer Frost definitely has a chip on her shoulder as she must drain human life force to keep herself and her powers going, but Batman uses her as an example of the JLA’s mission, which is to help rebuild the world with ordinary people, not godlike beings like Superman and Wonder Woman.

The other recruitment interactions have more levity as Orlando and Reis introduce Lobo with explosions and biker gang members flying everywhere in the usual Main Man fashion. His and Black Canary’s verbal sparring pops up several times in the issue with each of them getting a few good licks, especially when Lobo lands a hilarious zinger about canaries and coal mines that is a tad on the darker side. On a more adorable note, The Ray and Ryan Choi’s Atom instantly bond over their lack of experience as superheroes or life in general. Marcelo Maiolo uses a prismatic color tone when Ryan uses his shrinking belt, and I look forward to seeing him in action even though Batman wanted his mentor Ray Palmer on the team. They also kind of have this fanboyish joy while interacting with Batman and watching him try to put together their first team meeting. Also, it’s nice to have a male Justice League member who has boy problems… 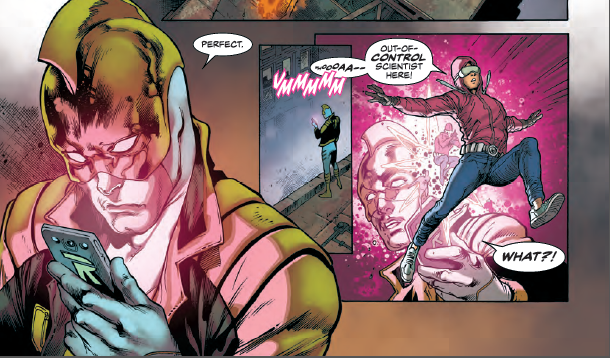 Orlando positions Vixen at the heart of the JLA and has Batman openly compliment her while recruiting this busy businesswoman/philanthropist/model/superhero with the power of any animal. In the early going, she seems to be the most emotionally stable member of the team while being a passionate fighter for justice as she is introduced with a flame palette from Maiolo. The fact that she uses bat powers to go meet Batman on the rooftop is pretty cute too, and she is later a presence of quiet calm at the team meeting while Lobo is being utterly childish. Not even Batman can get him to shut up, but he gets some leeway as the team powerhouse kind of like a diva NBA star, who gets away with being overly dramatic due to his talent. Being unkillable will help on any kind of mission.

Steve Orlando, Ivan Reis, Joe Prado, Oclair Albert, and Marcelo Maiolo give this new iteration of the Justice League a firm foundation in JLA Rebirth #1 by spending an entire issue creating the team’s quirky, yet full of heart dynamic before jumping into their first adventure.