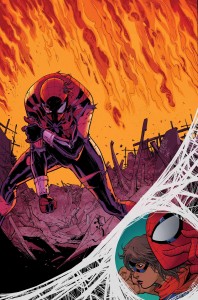 I really enjoyed this team up between Spider-Man and the all-new Ms. Marvel. The way they play off each other and the way in which they work so well together are great to see. Because as peter points out in the issue, she is a lot like a young wall-crawler we know when he first started. It is a very sweet moment between the two and you can tell by the look on Kamala’s face how excited she is to get a stamp of approval from the Amazing Spider-Man himself.

I really enjoyed the artwork. I’m glad Camuncoli is in the Amazing Spider-Man rotation with Humberto Ramos. They both have completely different styles, but both really suit the character. And also in this issue we have the debut of Silk’s new costume! The costume is pretty cool, although I didn’t think just the webs were that bad.

I know in the review I wrote for Amazing Spider-Man#7, I posed the question about who the henchman that had a past with Spider-Man was. And we did not have to wait very long to find out. And I’ll keep this review spoiler free and not say who it is, but I did not see it coming. I’m not disappointed about the reveal and I think it could lead to some interesting character interactions down the line because of what transpires in the issue.

Edge of Spider-Verse: My Brother’s Keeper

Wow. For only being a back-up story, this story sure packs a punch. It’s very dark and everything happens quickly. There are some great character moments in this issue, for example there is a great scene between Peter and MJ while Mayday and her brother are escaping certain death. It kind of made me miss Peter and MJ being together in the 616 universe, but just for a second. With how this issue plays out, I’m sure we will see a very different, much darker Spider-Girl in Spider-Verse.

Ramos’ artwork is absolutely fantastic and it’s really great to see him draw characters we don’t normally get to see him do. I’ve missed his art the past few issues, to me, his style just fits the spider universe so well.

All of the spiders have a reason to fight. It really is life or death for them. I am so pumped for Spider-Verse to start. I can’t wait to see the dynamics between all of the spiders. There has been very little interaction between spiders so far, with the exception of Superior Spider-Man #32 and #33 with SpiderOck and his team recruiting spiders.

Rating: 7 (Out of 7) – Great conclusion to the Ms. Marvel team-up and an awesome back-up story leading directly into Spider-Verse!