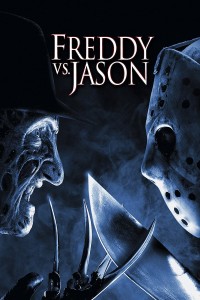 It was a long time coming. Ten years after being hinted at in the final scene of 1993’s Jason Goes to Hell, two of cinema’s most popular horror icons would finally share the big screen in Freddy vs. Jason. But after years of fan speculation and script rewrites, was it worth the wait?

Freddy narrates the opening scene, describing his past exploits and how the town of Springwood slowly began to forget about his murderous escapades. His power linked to the fear of Springwood’s residents, Freddy has no choice by to enlist a subordinate to spark terror in the hearts of the town’s children. And what better henchman is there than the equally “prolific” serial killer of Crystal Lake, Jason Voorhees?

Taking the form of Jason’s mother (the killer from the original Friday the 13th), Freddy manipulates Jason into moving to Springwood to vent his murderous rage, starting with a group of teens having a party at the former residence of Freddy’s former rival, Nancy Thompson. The infamous Elm Street location is now home to a teenage girl named Lori, who, along with her two best friends, witnesses the aftermath of Jason’s first murder in Springwood. Lori and her friends investigate the murder and begin to unearth Springwood’s horrific past, making them prime targets for the two supernatural killers. 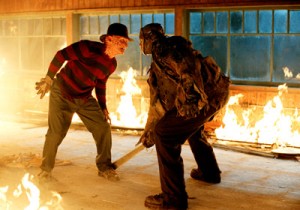 As Jason’s killing spree continues, some of the older residents of Springwood begin to whisper the name of Freddy Krueger, wondering if the long-dormant killer has finally returned to torment their children’s dreams. With the townspeople fearing the dream demon’s return, Freddy regains enough strength to begin invading the dreams of his young victims. Unfortunately for Freddy, Jason remains hell-bent on wiping out each and every sinful adolescent in Springwood himself, and it’s not long before the two maniacs come to blows. As the film’s tagline concisely puts it, “winner kills all.”

Freddy vs. Jason should be the peanut butter & jelly sandwich of horror films, blending the Nightmare on Elm Street series’ creatively surreal dream sequences with the blunt brutality that the Friday the 13th series is known for. The two styles never quite gel, however, and both horror icons feel watered-down as a result. Freddy is far from the gleeful maniac that he was in most of the Nightmare movies, and his conversations with himself are laughably contrived. The abundant CGI gore effects are also a bit of a let-down, having none of the charm of the practical effects that both series are famous for.

The movie disappoints Nightmare fans further by not being imaginative at all with the dream sequences. Police stations and boiler rooms can be eerie locations, but why aren’t we delving further into any of the characters’ psyches? Friday the 13th fans have it a little better since the film still has a fair amount pointless sex and nudity, along with one particularly memorable kill made by Jason. However, the film jumps around too much to be able to focus on the sort of tense atmosphere that is easily provided by a Friday the 13th film set entirely in the woods. 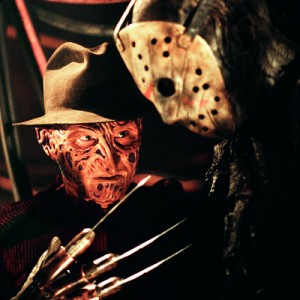 The film is at its most enjoyable when it simply lets Freddy and Jason engage in a no-holds-barred fight. The one-one one battle is undeniably goofy and ultimately inconsequential to the overall plot, but it is great fun to watch the wiry, nimble Freddy snake around Jason before plunging his blades into the massive juggernaut’s back. Fans of both series know that it would take more than some well-executed martial arts moves to take down either Freddy or Jason, but the fight scene does its job in distracting viewers from the mediocrity that surrounds it.

Freddy vs. Jason is worth watching, but just barely. There’s little reason to watch it over the better entries from either of the series it is derived from, but at least it’s competently made, if disappointingly uninspired. Hardcore fans of either series will feel the most let down by the crossover, but the movie makes for decent entertainment if watched with a group of friends while enjoying some drinks.

BK: Jason’s first kill is one of his best ever. After stabbing an obnoxious frat boy through the back with a machete many times (the victim maintains a vice-like grip on his beer the entire time), Jason violently folds the bed he is laying on, snapping his spine in two.

Genuine Scares: This film references human Freddy’s predatory nature much more than any of the Nightmare films ever did, and Robert Englund performs well as a creepy child murderer.

Rating: 3 (out of 7) – Freddy vs. Jason falls far short of the hype, and is best appreciated as a trifling novelty.