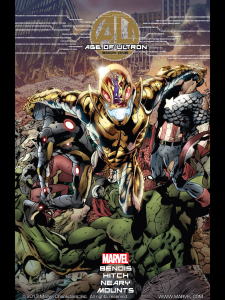 I was very excited for this Marvel event, and my expectations only grew when I finally saw how beautiful the cover was when I picked the issue up today.

Age of Ultron #1 is like an action packed summer movie, but lacking some major plot points. The reader is thrown right in the center of things to begin with. We see a destroyed New York City, which was drawn beautifully. We see Hawkeye looking some what beat down, but breaking into a building and killing anyone and everyone who stands in his way. Hawkeye proves to be on a mission in this Hellish version of New York City. As the action unfolds, which involves several arrows though necks and arms, Hawkeye reaches his goal. We learn that the people Hawkeye has been killing have a deal with the Ultron’s that if they delivered people, then Ultron’s would leave them alone, and an Avenger is worth a lot. Hawkeye enters a room and finds none other then a beaten down Spider-Man. 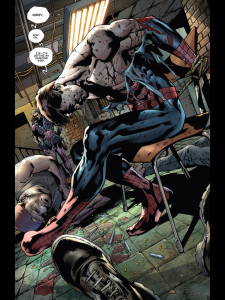 Hawkeye rescues Spider-Man and as they are leaving the area begins to vibrate. This was a very cool effect artwork wise, made it feel as if you were there. The only problem is that the blurred frames are a little hard on the eyes, because when reading it was hard to focus. A cool effect none the less, I would have just liked it in a few less frames. These vibrations are coming from the Ultron’s who are attacking the building and eventually blow it up just as Hawkeye and Spider-Man escape. They return to a destroyed SHIELD Ship where there are other members of the Avengers, but this is not the team we are used to. They are broken down and have a lot of doubt about the future. They argue about the smallest details. There seems to be a lot of distrust between the members and no one seems to be as broken down as Captain America.

Overall, this was an action packed issue but very light on plot. I would have liked some sort of tease at to how our heroes got to this point. I hope we explore a flashback issue that will really dive into how our heroes got to this point and what really caused the them to be in this world. I liked how we got to focus on Hawkeye and see him shine in a rescue attempt. Right now it would appear that he is the only one with hope and still willing to fight. 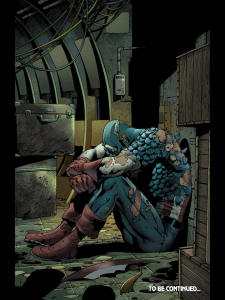 I was really impressed with the New York City frames, the artwork really made you get a sense of the hell that the Ultrons have brought to the city. The amount of detail and color tone gives us the feeling that there really is no hope for humans or the Avengers. We see a world that is totally destroyed and where “gangs” seem to run the show. The artwork of New York City really allows the city to almost become a character of its own. Without showing the scenes of destruction this would have just felt like Hawkeye going to save Spider-Man from some thugs. By showing us that this world is vastly different then what we are used to allows us to feel a sense of urgency.

Overall, Age of Ultron # 1 is a MUST BUY. I would have liked there to have been a bit more plot, as well as a flashback tease to how our heroes got to this point. The artwork was fantastic, even though the vibration frames were hard on the eyes that was a very cool effect. New York City was as beautiful as a destroyed overrun city could be. Hawkeye taking the lead was fun. Finally that final page of Caption America was interesting.