The little header up top is slightly false. We’re going to mess around with the format from week to week now. Just to mix it up and because we both take away different things from the movies. 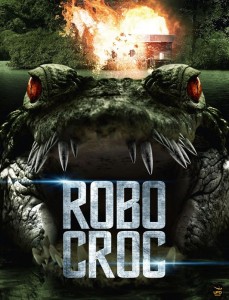 In the case of Robocroc, Swan actually doesn’t remember anything that happened in the movie, which is a pretty big indication of its quality! Which means I (Penguin) will be taking the reins on a brief write-up on Robocroc.

Right off the back, I don’t recommend this movie.

To expand on that, even for a SyFy movie this is pretty bland. The concept is intriguing, a crocodile who was infected with nanobots that was slowly turning it into a killing machine goes on a killing spree. The execution is no where near that exciting though. A lot of random elements come into play, a military group, a pact of park rangers, random kids partying and the crocs. The film does a poor job of jumping between these groups and really don’t bring the pieces together until near the end in the silliest manner. Such as the fact that the park’s water runs into a nearby water park and that’s how the croc was getting around?

The film even falls flat during its climax, which is just a really long, dull chase through the sewer systems. There’s really no tension or intrigue in it at all.

The acting is pretty bland or terrible across the board. With special note to some of the teen actors, who really didn’t act. It was so bad. Luckily, a lot of them were killed off in quick order.

The special effects weren’t that special but they were numerous which accounted for most of our drinks in this film. That was closely followed by whenever they mentioned the croc. Other than that, the final 3 rules just kind of blended together. It wasn’t a special drinking movie.

Review 1 (Out of 7) At the end of the day, there is nothing here worth recommending. It isn’t self-aware bad like Sharknado nor is it a giant monster thriller. PASS!Â