151 Proof Movie: The 41 Year Old Virgin Who Knocked Up Sarah Marshall and Felt Superbad About It Drinking Game

I hate these parody movies. Not all parody movies, but these recent class of them. Stuff like Disaster Movie, Vampires Suck!, Superhero Movie, the list goes on and on. They aren’t funny. They aren’t creative. They don’t have anything to say. They are nothing more than lazily written jokes to try and ape off of popular movies of the day, which is why they are dated so quickly.

Anyhow, we have tried and tried these movies and I just can’t get into them, but it has been a month since our last 151 Proof Movie and we like to return with a bang so here we are with another lame parody film. This time with a super long and annoying title, The 41 Year Old Virgin Who Knocked Up Sarah Marshall and Felt Superbad About It.

So lame in fact that we’re not even gonna bother creating drinking rules for this movie. Instead, we’re gonna attempt the first ever 151 Proof Movie Power Hour.

The concept is exactly what the name says. For the duration of the movie (in this case 82 minutes), we will take a swig of beer every minute that passes. The assumption is either get really hammered or pass out… but don’t have to suffer through paying attention to the movie. 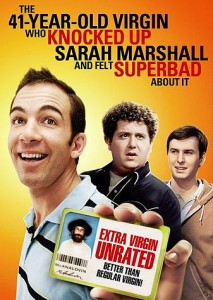 Just look at that poster. ARGH

For more of our drinking games, check out the ever-updated Mega-List.

As always, we will put these rules to the test when we can and make any necessary amendments to make sure you have the BEST possible time while watching the movie. You can follow along by following either @ER_NOTR or @Wooden_Pint on Twitter. Or by following the hashtag #151PM. Usually starting at 10pm ET/7pm PT on Friday nights!