An adventurous week awaits DC as Clark Kent crashes a party, Wonder Woman has a new origin and the Robin War comes to an end. 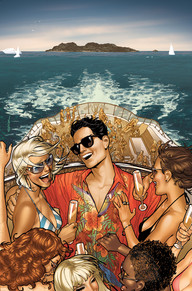 We have had a lot of stories that have detailed Superman’s origins,we even had a show that ran for a decade that detailed Clark Kent’s life, but I’ve never seen anything quite like Superman: American Alien. Issue #3 seems to look at Superman as an alien, not just as a person from outer space, but invading a social circle he is completely foreign to. By some weird mishap, Clark ends up on Bruce Wayne’s yacht for his 21st birthday. Embracing the fact that Bruce and Clark are drawn very similarly in their civilian guises, the guests are too drunk/stoned/aloof to not notice that Clark isn’t Bruce and they embrace him as one of their own.

What follows is Clark’s introduction to this world including a scene where he snacks on $4,000 caviar, and laments how this amount of money is wasted on them while others work so hard to make end’s meet. Sadly not much else comes from that scene.

The best part of the comic for me was Clark’s random run-in with one of DC’s bigger villains, but won’t spoil it at all.

The art is top-notch. Like noted before, I love that the artist embraces the similarity in design between Clark and Bruce. I love the color usage especially during the hot tub scene with the nice soft sunset and the lighting really makes the characters pop. There’s also a sequence near the end that does a great job of playing with Clark’s… altered perspective. 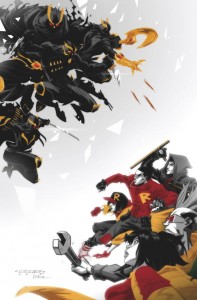 I wasn’t sure what to expect when Robin War was announced. Damian Wayne doesn’t have a history of playing nice with others, and never shown that much respect to his previous Robins so you can imagine how an army of impersonators would… trigger him. And it did, but this story turned out to be larger than Damian and even larger than the Robins. I would say this turned out to be Duke’s story and in turn it made the “Robins” all the more impact going forward.

The issue picks up with Damian having sided with the Owls and trying to get the Robins to tuck tail and run home so no more would come to Gotham, but his advice about “Rise or Stay Down,” comes back to bite him in the arse. Though he dispatches of Tim and Jason, rather easily (it wasn’t a good week for Jason), and most of the other Robins, he finds that one has more resolve than the rest. And it really forms the emotional crux of the series. It’s a fantastic sequence and the ultimate payoff has me intrigued for the future of these two.

That isn’t to say that this story isn’t without its problems. The biggest being that momentum shift is built up well, but it’s over so quickly. It just kind of felt like a deflated victory for our heroes, but a victory nonetheless. And not quite sure what they are doing with Dick really. He seems to be all over the map in the universe right now.

The Legend of Wonder Woman #1 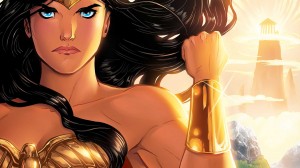 Now on the bright side, I had no expectations going into this book. On the super bright side, it turned out to be an amazing purchase.

First detailing the rise of the Amazons and their home on Themyscira. It’s a small section of the book but so well done. And drawing all the gods and Titans and their battles is lovely. The colors are vast, the designs large and the panel transitions unique.

The meat of the story though is about young Diane. After her “birth,” we jump ahead a few years and find a Diane who is destined to be Queen so she is handled… differently than the other Amazons. And I would go into details, but really the bulk of it is we get to a see a young Diane who is a bit more in-tune with Themyscira than her Amazonian peers, but really can’t do anything about it. Being the Queen’s daughter has its limitation as she is being groomed for a leader in peace time, not in war-time. But she is young and curious and goes out on her own, and we see that there may be trouble lurking closer than she knows. The issue ends with a promise of some grueling, but fun combat to come.

The story was ace, but the art in this book is stunning. Crisp, clean images. Some great use of shadows and lighting. There’s a segment when one of the Amazon kills a creature and it’s a black and red image that’s just so visually striking without really calling attention to the gore of it all. Top-notch stuff.