Superman has a world of powers from super-strength to heat vision to the ability to turn back time.. sometimes. Even with all of his powers though, Superman’s two go-to moves seem to be punching things and tossing things into space. Think about it, how many Superman movies involves him throwing things into space in some capacity? In honor of that, we’re going to present our Top 7 Favorite Moments of Superman tossing shit into space!

7) Superman vs The World (Injustice: Gods Among Us) – In the latest DC fighting game, Superman’s super move is to launch his opponents into space before slamming them back to the ground. He gets to do it to the entire DC Nation!

6) Superman vs The Elevator (Superman II) – When someone sets a bomb on the elevator of the Eiffel Tower, you have two options: get rid of the bomb in some fashion or tossing the entire elevator into space.. which option do you think Superman pursues? To make matters even worse, tossing the elevator into space causes an explosion which frees three Kryptonian villains, who would be the main threat in the film!

5) Superman vs The Missiles (Superman: The Movie) – Chasing down two missiles, and don’t have time to defuse them? Toss them into space! This one actually does make a bit of sense, quickest way to get rid of them and was against the clock! Also depending on the cut of Superman 2 you see, this is another cause for Zod and his followers being set free.

4) Superman vs Eradicator (Superman Comics) – Sometimes, Superman can be over eager with tossing things into space or the sun. In the case of the Eradicator, it only served to piss him off and foster his creation of the Krypton Man to go after Superman! Live and learn, I guess. 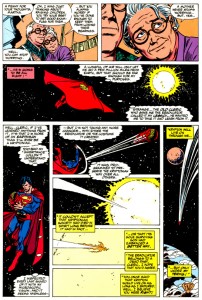 3) Superman vs The Kryptonite Island (Superman Returns) – What do you do when your arch-nemesis creates an island made of the one element on Earth you are vulnerable to? You slowly lift it out of the water before tossing it into space and then plummet back down to Earth. It is an impressive task, and logically can’t think of another way to remove the land mass!

2) Superman vs The Quest for Peace (Superman IV: The Quest for Peace) – One of the most basic elements of Superman’s character, is what he is capable of doing but chooses not to do because he believes in the best of mankind. But what happens when a little kid questions why Superman doesn’t do enough? You get the Quest for Peace scene where Superman collects all of the world’s nukes in a giant space net before tossing it into the sun. Because.. why not?

1) Superman vs Doomsday Lane (Injustice Gods Among Us comic) – This is the most messed up entry on our list. Due to some poisoning by The Joker, Superman believes he is doing battle with Doomsday to protect his family. But it actually turns out that he is fighting a confused and frightened Lois. By the time Superman realizes though, it’s too late!