Nothing defines cinematic horror quite like the “slasher” flick. The sub-genre that Psycho begot went full steam ahead after Halloween became a smash hit, and has spawned a large number of long-running series. Part of the fun of watching slasher flicks is in seeing how creative the filmmakers can get with character deaths, and this aspect can make even some of the worst horror films tolerable (at least to a certain extent).

7. (Actually the worst) Buzz Kill (The Town That Dreaded Sundown) – OK, so this isn’t remotely one of the best kills in a slasher flick, but it certainly is one of the most memorable! Released in 1976 (between The Texas Chainsaw Massacre and Halloween), The Town That Dreaded Sundown initially feels like a forgotten gem. It’s based on a chilling series of real-life murders, with dry narration and grainy shots that give it the feel of a long-lost documentary. Things start out well, but then… The burlap sack-hooded killer ties a pocketknife to the end of a trombone and uses it to stab his victim while buzzing into the mouthpiece, effectively evaporating any tension built to that point. It’s silly, it’s embarrassing, and, most importantly, the killer’s embouchure is just terrible. My grade school band teacher would’ve been all over this guy! 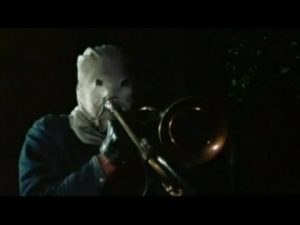 6. Garage Door Malfunction (Scream) – Wes Craven’s Scream is a film that revels in nostalgia and generally plays it safe with the death scenes, favoring sheer brutality over originality. Such is not the case, however, when killer “Ghost Face” locks Tatum (Rose McGowan) in a garage during a party. When the killer’s plans go awry and Ghostie is pummeled by Tatum, his would-be victim makes a run for the “doggy door” at the bottom of the garage door. She gets stuck halfway through the small opening just as the killer recovers from his daze, and faster than you can say “Edvard Munch,” he flips a switch to raise the garage door. Tatum kicks and screams helplessly as the door rises, but is unable to escape and is hideously crushed between the door and the ceiling. 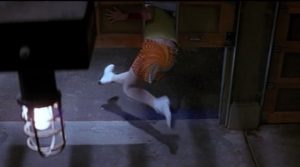 5. Your Head Asplode! (Maniac) – 1980’s Maniac is an interesting slasher flick. It chooses to focus on the fractured psyche of the killer – a deeply traumatized New Yorker who can only drown out the voice of his demented mother in his head by murdering women so he can attach their scalps to one of the many mannequins that decorate his seedy apartment. Being ahead of its time and somewhat original does not make it any easier to watch, however, as it is one of the grimiest and most unpleasant horror films out there. The film’s most shocking moment, courtesy of effects guru Tom Savini, is when the titular madman runs at a parked car with a randy couple inside, jumping on the hood and immediately blasting the male driver’s (played by Savini himself) head clean off with a shotgun. It’s a truly disgusting scene that remains deliriously shocking, if a bit on the trashy side. 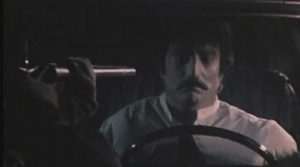 4. Hung Out To Dry (The Texas Chain Saw Massacre) – Speaking of grimy, The Texas Chain Saw Massacre is one of those mean-spirited movies that will make you feel like you need a shower as soon as you finish watching it. If it weren’t for the atrociously bad acting, you’d swear you were watching a snuff film from the 70’s. The gritty mean-spiritedness of the movie reaches a fever pitch when the cannibalistic “Leatherface” impales a severely unfortunate girl on a meat hook, leaving her hanging helplessly but conscious, before turning his attention to her subdued boyfriend, who is promptly carved up with a chainsaw. It’s a demented sequence with some impressive camera trickery that makes it feel far more graphically violent than it really is. 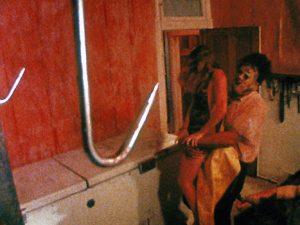 3. The Raft Scene (The Burning) – The Burning is generally thought of as a Friday the 13th knockoff, but it occasionally takes an entirely different approach in chronicling its killer’s mayhem. The killer – a hideously burned camp custodian named Cropsey – makes rivals Jason and Freddy look timid in comparison when he attacks a raft full of campers out in the open and in broad daylight. The scene lasts all of a single minute, but Cropsey’s brutally efficient use of gardening shears makes it feel like an eternity, as he viciously slices and dices the stunned teens (including a young Fisher Stevens, paying in advance for his atrocious role in Hackers. Give him one for me, Cropsey!). Cropsey’s memorable assault proves that, in slasher flicks, actions speak louder than gimmicks. 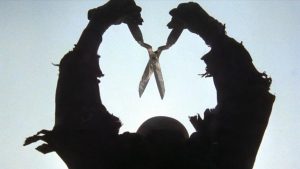 2. The Sleeping Bag – ‘Nuff Said (Friday the 13th Part VII: The New Blood) – Friday the 13th is easily the most consistently entertaining series of slasher flicks out there, with nearly a dozen entries. You really can’t go wrong with any one movie in the core series, as each has its share of hilariously bad acting and creative kills, most of which are provided by our favorite amateur hockey goalie, Jason Voorhees. Jason’s finest kill happens to be one of the least elaborate – he picks up a sleeping bag (with a girl already inside, of course), drags it out of the tent and promptly slams it into a nearby tree, killing the girl instantly. That’s it. One swing, minimal blood. Simple and effective. The scene became so popular that it would later be echoed to great comedic effect in 2001’s underrated Jason X. 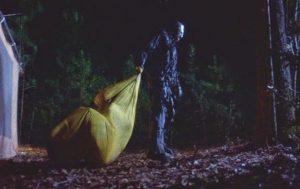 1. That’s How It Starts??? (Suspiria) – Most of this list has consisted of “fun” kills, with Maniac and The Texas Chain Saw Massacre being major exceptions, but Suspiria’s first murder scene is anything but. It’s the horror equivalent of the Normandy Beach D-Day scene in Saving Private Ryan – a brutal sequence of sadistic violence and garish visuals that is exhausting to watch and one that you would never expect in the opening ten minutes of a movie. The breathtaking set design and surreal lighting (a staple of director Dario Argento’s work in the 70s) are perfectly complemented by Goblin’s spooky score to create a truly nightmarish setting for the double murder to occur in. It is difficult to watch as the victims – two young women attempting to escape from a German ballet academy – are mercilessly stabbed about a thousand times by a disembodied pair of gloved hands. The sequence is graphically violent and feels like an assault on the senses, but it does have a mesmerizing quality to it. Just don’t expect the rest of the film to reach that same level of horror. 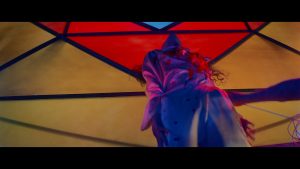 Is that seven already? There are so many memorable and ridiculous slasher kills that one list can hardly do them justice. Let us know what you think and if we forgot any of your favorites by leaving a comment below!