Sonic: Lost World represents SEGA and Sonic Team’s latest re-imagining of their storied blue mascot in the world of three-dimensional video games. Once as synonymous with gaming as Mario, Sonic the Hedgehog’s well-documented struggles in transition to 3D have left a wake of inconsistent outings, most of which have not been very good. For his first platforming outing on the Wii U and 3DS, Sonic’s new game selectively borrows elements from his more successful appearances while infusing the formula with a bit of Super Mario Galaxy‘s design approach. The result is a 3D vision of Sonic that may finally be worthy of its hero.

At the heart of Lost World‘s new take on Sonic are the cylindrical levels. For the most part, Sonic runs into the screen either around or inside the large cylinders that the levels are carved out of. Instead of blindly racing through these levels, Sonic Team has made a concerted effort to increase the emphasis on actual platforming. This means a few changes to Sonic’s movement, the most noticeable of which is the fact that he doesn’t automatically sprint. 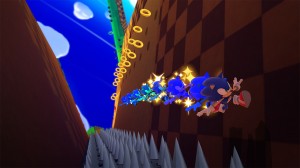 Holding the left analog stick will only make Sonic walk (somewhat briskly) in the desired direction, while running requires that the player holds down the ZR trigger. It’s a change that appears trivial on paper, but in practice it completely changes the way you play as it encourages the player to take a more methodical path through the spiraling levels.

Manual sprinting isn’t Sonic’s only new trick. His signature spinball is now mapped to the ZL trigger, making it a nice complement to running. Sonic’s homing A button attack returns, but he can also now run along walls and grab onto edges. That last ability seems minor, but once again it serves to bolster the game as a platformer as it helps to remove frustrating limitations to give the player more freedom and let the level design shine. 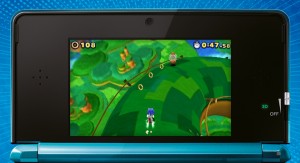 The demo at SEGA’s E3 booth contained 3 of those levels: the typical Green Hill Zone-type scenery that is as standard to Sonic games as the beach on a summer day; a level called “Desert Ruins” that looks exactly how it sounds and reminded me a bit of Sonic and the Secret Rings; and a level based entirely around delicious desserts like ice cream and cake that features candy canes for rails.

Green Hill Zone in particular makes fantastic use of the new cylindrical levels and the new focus on platforming as it asks players to navigate around the orbiting areas. It is during these segments that the comparisons to Mario Galaxy are most visible as Sonic must take into account the geometry of the levels when finding the right path to progress (albeit without much emphasis on gravitational effects). Sometimes levels also switch seamlessly into the 2.5D sidescrolling segments that fans have celebrated since they were introduced in Sonic Unleashed. 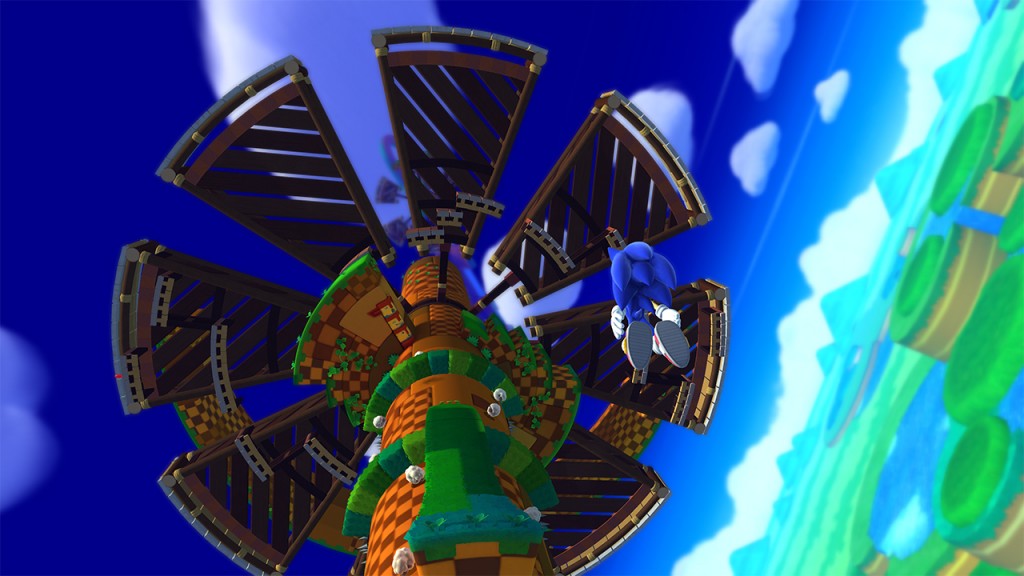 Sonic’s inaugural native HD outing impresses, even if it might not be considered a graphical showcase. The game’s bright colors and intricate backdrops are rendered in crisp detail and the Wii U has no trouble keeping the sharp visuals running smoothly despite the occasional bursts of speed. The obvious resolution downgrade for the 3DS version is mitigated by increased immersion afforded by the system’s 3D capabilities, which play perfectly into Sonic: Lost World‘s “run into the screen” approach to level design. Longtime fans will be wary of any last-minute gimmicks Sonic Team might throw in to break the game’s pristine approach, but if Sonic Colors is any indication the developer may finally be learning from those missteps. If it has, Sonic: Lost World is shaping up to be a refreshing return to form in what may be the most fitting 3D translation of the blue hedgehog to date.