Talk of the Town: Uncharted 3 Beta


Talk of the Town focuses on what’s creating the most buzz in the entertainment industry. For the past few weeks, nothing has created quite a stir among gamers like the Uncharted 3 beta. Reaching nearly 1.5 million users, we’ve gathered the impressions of a few to share with you below. Check em out!

Graham shares his thoughts on the buddy system and how it helped make the game more enjoyable:

I think the thing that I’ve had the most fun in the Beta with is the buddy system, especially in my house where there are 2 PS3’s. I think competitive play is at its best when it really celebrates your finer moments and rewards you for that, so being able to ‘high-five’ with your buddy over someone you just killed together is both a bonding experience and a nice way to show how much you just owned some guy. It’s almost like a developer-sanctioned tea-bagging moment.I would hope that the buddy system encourages people to stick together and lead to people having better games together. Its little features like the buddy system that show Naughty Dog is taking the multiplayer component much more seriously this time around, and it’s nice to see features I’ve come to expect from a games multiplayer component, like spawning on your squad mate, feature in Uncharted 3.

Douglas shares his general impressions and experiences with the beta:

I played the Uncharted 3 Beta a good bit, and I have to say I thoroughly
enjoyed it.

I found the gameplay to be entertaining and with a high replay value. Both
the Co-op modes and the Competitive modes were enjoyable.

The graphics looked fairly good for the PS3.

The maps were decently laid out, with the Yemen map being my personal
favorite.

The controls were alright, but I felt that the Sprint function was a bit
touchy and clunky to maneuver.

Other complaints are that sometimes it took forever to find matches and it
would kick me out of parties. It got annoying sitting for an hour+ without
finding anything or keep trying to get in a party then immediately getting
booted out every time.

Just like most games, some stuff is overpowered or underpowered. Tweak some
of the weapons to where it’s a bit more balanced, but this is coming from a
guy that chooses to use Dan Hibiki in Street Fighter.

Overall, the Beta was great with some minor flaws, I’m looking forward to
the final release, it will probably be my favorite shooter this gen.

Nothing compares to Perfect Dark on the N64 though, just saying. 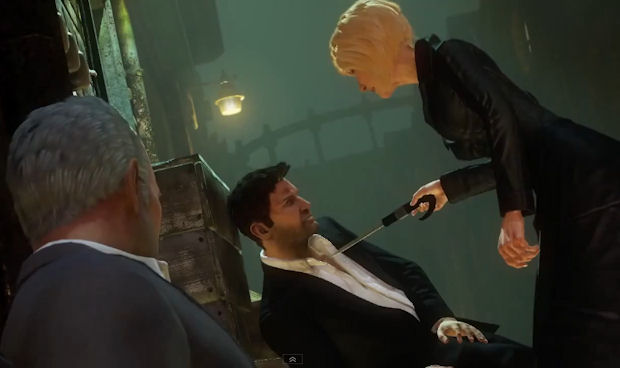 Our Drake always getting in trouble!

Below, Daniel gives us some brief thoughts:

Tom, who has made one appearance on Dual Wielding, shares his pros and cons with us:

Overall the beta has been a great and addictive experience

It is definitely an improvement from U2’s multiplayer where it felt like they’d only hit the tip of the iceberg.

-Maps are a real treat to play, they are more complex than the previous maps released in U2 which consequently made playing them much more fun.
NOTE- the fact that 2/3 of the maps was more about verticality than traversing was a breath of fresh air where I thought in U2 they lost some of that quirk.
-More playlists or game types was the only way to go with U3 beta. Pretty good list
-Joining games, a simple change/add-on but that was a pet hate of mine that I’d have to wait so long to get in a game just coz they had to start a fresh

-Hunter co-op, fun idea but jeez it’s pretty dull to be honest. It’s basically 2 team plunder. ND should have changed the Plunder aspect to something new. If that happened the co-op would be solid gold. (no pun intended)
-It’s not a con per-say but I feel the ‘customisation’ aspect didn’t really grab me if only to know that I’d unlocked everything. I could have quite happily had a good few set skins to choose from instead. Oh and emblems- one big MEH.
-Some beta bugs, but is obviously totally understandable.

Finally Nathan shares with us, his first real enjoyable experience with an online shooter:

I’m not a huge fan of online multiplayer, but Uncharted 3’s beta may have
made me a believer. It not only takes the problems that Uncharted 2’s
multiplayer had and erase them, but also adds brand new things that keep the
gameplay fresh, something that I personally think is sorely lacking in the
Call of Dutys of the world. Although the basic system in Uncharted 2 is
still in place, everything has been improved and streamlined. Firstly,
everything moves more smoothly than in Uncharted 2, from movement to melee.
Running has been added, which is a welcome addition, since it makes avoiding
gunfire easier. Everything moves at a brisker pace. Naughty Dog seems to
have worked hard at making the game more balanced, such as allowing players
to join games in progress to even teams out. But the main kicker, and this
is where Uncharted 3’s multiplayer blows possible competition out of the
water, is with power plays. In Team Deathmatch, when one team or the other
pulls too far ahead, the winning team is given a handicap, and the losing
one an advantage. This comes in the form of three different boosts. The
first is Marked Man. Killing your opponent’s marked man will net you 3 kills
instead of 1. The second is revealing your opponents’ locations, so that you
can find them more easily, even possibly sneak up on them before they
notice. The third is double damage, which lets you deal double damage to the
winning team. Power plays not only make the game much more strategic (do you
camp and protect your marked man, or hunt down possible attackers?), but
balances the game remarkably well. It was not uncommon for my team to be
behind, only to pull ahead from power plays and end up winning, and more
often than not games would be decided within a few kills. This makes each
game more interesting and more intense. It also makes things more available
to players who aren’t very good. If your team is losing, power plays could
catch you up. The other thing that I found most interesting was the addition
of so-called “narrative co-op” games. I played a few, and they were fun.
They’re apparently side-pieces to the main game, and I’m curious how Naughty
Dog will implement them in the final release. The multiplayer wasn’t
perfect, however. Some guns seemed too overpowered, and (as with Uncharted
2), it was too easy to kill someone by just running in circles with an uzi.
No aim necessary. The game also glitched more than I think it should have. I
once got stuck in a wall and could do *nothing* except wait for the game to
fix itself. I couldn’t even throw a grenade to kill myself and respawn. I
got stuck in walls a few times, and a few of those it was as I spawned. I
also “fell off the world” a couple of times. I don’t know how that happened.
I expect most of these problems to be fixed for the final release.
All-in-all, Naughty Dog should be commended. The multiplayer not only meets,
but exceeds expectations in my opinion. The final release can only be
better.

We'll see you in November!

Finally, I’ll share some brief impressions. Uncharted 2 is perhaps one of my favorite online experiences of the generation. The combination of shooting and platforming is unique in the plane of online shooters. The legacy continues with Uncharted 3 from what I’ve played. The game continues to be one of the most unique shooters online. The gun play is fun, and some of the changes are for the best.

That said, I do have some problems with the game. I think PowerPlays are a fairly cool feature, but I don’t like that a team is able to get 3-4 in a row. Yes, it helps keep the game balanced, but it is frustrating when you actually do well and get screwed over for one reason or another.

The customization/mod system needs some work. On customization, I feel it is fairly basic, at least the stuff you start off with. I understand the idea of having unlockables tied to gathering treasures and the like, but feel like some stuff should either naturally unlock or being purchase-able. I do LOVE how your icon will be all over a map if you start to dominate a match as well.

The mod system really only needs one or two improvements. The first would be a quick swap ability. I don’t like that you have to de-equip a mod before you can equip something else (nor does it automatically equip something once you un-equip something). The other thing is it needs to explain what the mods are. I got the Call-out for the AK-47, and had no idea what it was. Actually had to use it in a match to figure out it was a laser sight!

The maps were fun for the most part with Chateau being my favorite. I feel like the beginning of Airstrip is just unbalanced and caters to the team that controls the interior of the airplane. Either that or it becomes a stand-off with both teams just remaining in cover until the plane takes off. Yemen was interesting, but only got to play it twice with plunder.

Most of Uncharted’s game modes return, and they are all fun in their own way. I really dug co-op adventure mode, and can’t wait for more. Though there were some weird glitches we encountered.

All in all, I had fun with the Uncharted 3 beta, and can’t wait to try out the full product in November.