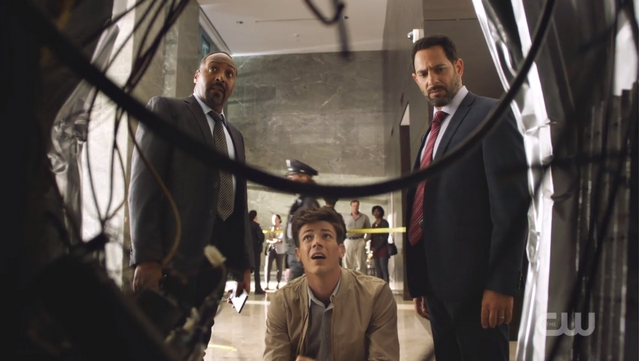 I think I’ll omit the spoiler warnings, wait no. Ok we got that covered quickly. So this week’s episode of the flash opens up with a realtor closing a purchase. Her buyer seems to a very rich and rude guy. Also that apartment definitely looked like Barry’s( Grant Gustin) & Iris’ (Candice Patton) pad. Which also was Oliver’s/Felicity’s. Ahem. So he head to the elevator alone. What follows is the rich jerk gets killed in the elevator, dropped. His killer is a mysterious hacker by the name of Sombra. Opps, I mean Kilg%re (Dominic Burgess).

The episode then shifts to Barry preparing an elaborate breakfast…for himself. He then apparently handled all the marriage arrangements. I’m not close to being married. But I think that’s definitely not something you do alone. She tries to pass it off as OK. However although Barry is oblivious we the audience know something is up. Shortly after Barry arrives to the murder scene and determines the odd nature of his death. Cisco (Carlos Valdes) joins in as an official CCPD consultant as well(huh guess it took 4 years). Turns out the cause of death was purely technically. 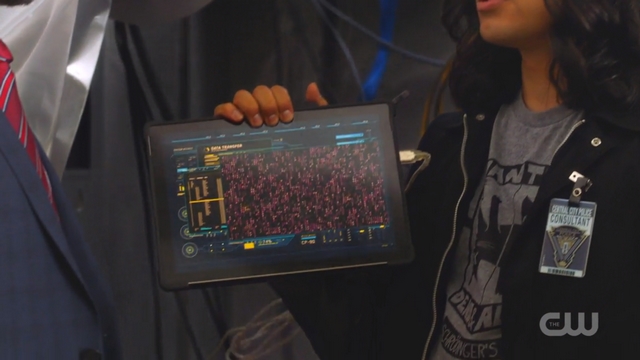 Back at Star Labs, the team discovers the hacker used an elaborate virus of sorts. As this requires some time to analyze we shift over to our favorite couple. Iris mentions that they have a training session later and there’s no time for dinner later. Well, Barry kinda cancelled that. Guess he’s not picking up on the fact that she’s the tactician. One could say he’s not quick on the uptake. This places a spotlight on the major issue of the episode. The dynamics of their relationship is very different from prior season. Noticing the awkwardness about, Cait (Danielle Panabaker) suggest they use couple therapy. Ms. West blows the notion that they need help off. This will not go over well.

At the same time, the team is visited by an unannounced Gypsy (Jessica Camacho). Within our 6 months gap, they’ve become a proper couple. They actually have an important date of sorts. It’s interesting to see that Cisco is making what shouldn’t work, work. We move to across the city where another soon to be victim is attacked. Kilg%re hijacks his vehicle for a highspeed death. Barry rushes to the scene without any plan and no help from Wally. Barry ignores an order from Iris and nearly gets this man killed. This is when their relationship has hit a problematic state. 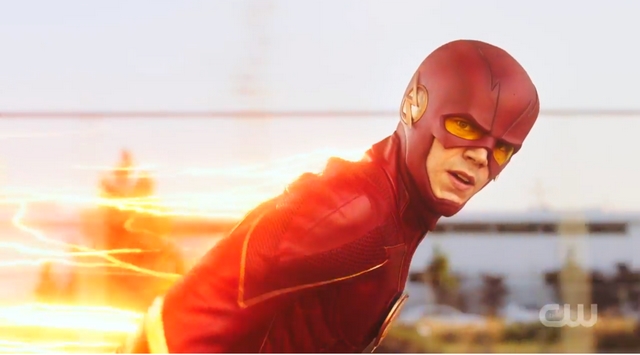 Upon return, Iris suggests well drags him to a couple therapy. Elsewhere Cisco is also dealing with relationship issues. Gypsy is waiting for their alone time however that has to wait. Now back to the very not fun therapy session. As our psychologist is quick to notice that our couple are dealing with some very not average feelings. Barry is visually at odds where as Iris seems more forthcoming with their issues. This reaches an abrupt end as they get a panic alert. Joe and Kilg%ore’s almost victim nearly gets attacked if not for Mr. Allen. After the little distraction it’s back to couple’s therapy for Barry!

At Star Labs, Cisco makes the connection to Kilg%re and he’s targets. Turns out they were a start up that sold their tech for billions. Problem is 3/4 of the group did this where as Kilg%re was left behind. During couple’s therapy things reach a very uncomfortable milestone when the truth comes to light. Iris has been dealing with the fact Barry chose to leave here for the Speed Force. Barry has no answers as he clearly wasn’t thinking about the repercussions of his actions. It may seem unfair to him but really he has had a tendency to rush into things. Now, the tense relationships don’t end there. Cisco messes things up with Gypsy because he fails to talk to her too. 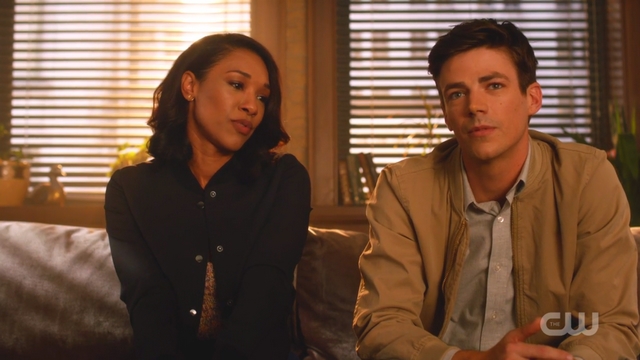 Maintime, the remaining victims confront one another. Now, in the location of a very pricey upscale home. During their bickering our would be murder greets them. He’s objective becomes so much clearer, he wants to not only take their lives but ruin their reputations. With his telepathic control of technology he places a target into insulin shock and escapes with the other. The couple’s therapy continues as we learn Gypsy wanted to spend Earth 19 equivalent of  Valentine’s Day with Mr. Ramon. However them being new to this…made it hard to get the message across.  Moral of the lesson here is that we should talk things out.

This ten applies itself to lead hero and heroine. As Mr. Allen and Ms. West have another heart to heart, we as the audience are a stark reminder. The Flash, isn’t who he is by himself, no he’s a hero that operates due to his support system. This is what makes him and by extension the show work so well. Those real emotions behind the superheroism. Our team then tracks down Kilg%re at one of those conveniently empty warehouses. 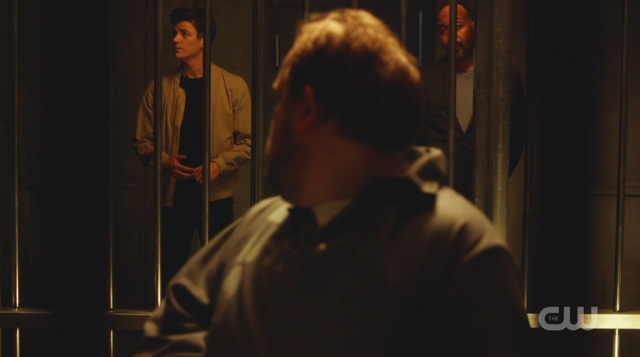 Remember how the Flash’s new suit is decked out with tech? Well, our metahuman menace definitely smells it on him. No literally he did. So all that tech? Turns out it’s a very bad idea to have. The Flash was rendered nearly completely useless. He knocks out his protege and almost blows up. To save himself he follows leader Iris’s command(finally) and hurl lightning at himself.

After short circuiting his suit, the villain is quickly dispatched and the day. won. Admittedly this villain was pretty forgettable. At the end of the episode we learn that Kilg%ore obtained his powers, by other means. So what else could’ve created new meta humans is the mystery that only The Thinker knows…we think.

This was a decent episode but it worked well because they addressed a major issue. Instead of addressing the failures of their relationship by the first episode, it was focused on here. You have to appreciate that the show recognizes it’s shortcomings and tries to fix them.

This episode of season 4 deals with the serious matter of Barry's & Iris' relationship. Which to this point felt very standard. The new dynamic of how they deal is compelling. Kilgore was kinda of passe. Cisco and Gypsy doing ok...was ok. Overall, a solid and average episode.