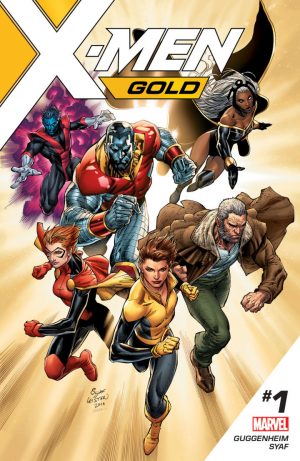 Once again, the X-Men are big damn heroes. Writer Marc Guggenheim gives X-Men Gold a “day in the life” type structure beginning with an action prologue then progressing to the X-Men and their new leader, Kitty Pryde, dealing with their not so adoring public and relationship drama, and finally concluding with more action and some new bad guys. He, artists Ardian Syaf and Jay Leisten, and colorist Frank Martin straddle a narrow line between just enough nostalgia to make old school X-Men fans happy and over relying on it.  However, X-Men Gold #1 has enough epic scale superhero team action and smaller character moments to make old and new fans of the merry mutants happy.

Syaf and Leisten bring some big time visuals to X-Men Gold #1 starting with a double page spread of the X-Men fighting Terrax, an ex-Herald of Galactus. The action scene works like clockwork with big money shots like Kitty phasing a skyscraper alternating with smaller panels of her barking out orders or Nightcrawler grabbing civilians. Martin adds spots of color like the blue and red of Nightcrawler’s teleportation or a shock of white lightning while not overwhelming Syaf’s pencils. It’s not garish, but reminds us that these are superheroes, not fugitives or freedom fighters. Syaf’s choice of layouts are enjoyable and smart like a panorama for the X-Men’s baseball game (That I will not shut up about until the next issue, or they go to the mall.) that is quite relaxing as the team takes a break from bigoted journalists, supervillain battles, and Inhuman drama. He’s not big splashes and poster pinups all the time using an overhead angle for a scene of Kitty in her office feeling the stress of leading a team and finding some way to pay 18 million in taxes for their headquarters in Central Park. Leisten helps out with the range of facial expressions, and Kitty looks different when she’s barking out orders in battle to chilling and joking with Old Man Logan and definitely when she’s dealing with her complicated feelings for Colossus. She has the strongest arc and the focal character of Guggenheim and Syaf’s X-Men Gold run. 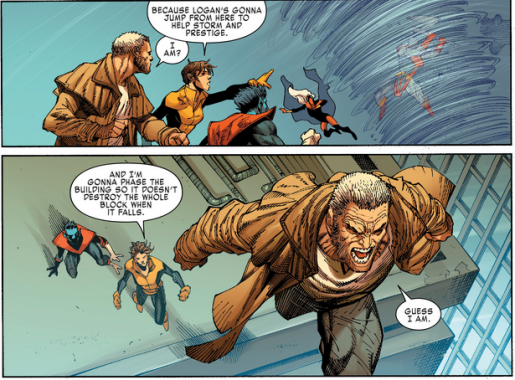 Thankfully, X-Men Gold #1 isn’t just blockbuster action although I could sit back and read about this well-oiled machine of a superhero team fighting villains all day long. Marc Guggenheim spends time exploring the X-Men’s personalities and relationships, and Jay Leisten’s inks accentuate Ardian Syaf’s lines and let readers know how the X-Men are thinking and feeling at any given moment. For example, you can see the earnestness in Colossus’ face as he wants to rekindle his relationship with Kitty over a slice of Chicago style deep dish pizza, and Old Man Logan is a little less cynical as he tones down his snark about an X-Men game because it’s a sign that things are returning to normal. Frank Martin turns up the reds when Rachel Grey, who has the new codename Prestige, aces a Danger Room workout showing that she’s done living in the past/dark future and ready to be an X-Men heavy hitter. This comes across in her central role in the cold open where she lays out Terrax with a right hook in the heat of battle.

X-Men Gold #1 is a really fun comic, but I have one quibble with it. Sometimes, it seems like Marc Guggenheim is that student in your college composition who kept repeating his (well thought out) thesis statement throughout his paper just so you would get his point. It’s nice that X-Men Gold has a clear direction as a comic book to reintroduce the X-Men as superheroes, who fight big battles and have cool powers, but also deal with prejudice from the outside world. But do we really need to have every team member echo this sentiment in a variety of ways, including quoting Shakespeare? Some slack should definitely be cut because this is a first issue and almost without saying a word, the final page cliffhanger illustrates Guggenheim and Syaf’s mixture of past and future in the comic.

In X-Men Gold #1, Marc Guggenheim, Ardian Syaf, Jay Leisten, and Frank Martin show that they can deliver on the flashy action as well as the quiet, usually angst filled character moments that are the reason why I and others fell in love with this franchise. Honestly, I was sold when Kitty Pryde said “To me, my X-Men” and then progressed to phasing a giant skyscraper through the ground. This is the best she has been written since Jason Aaron’s Wolverine and the X-Men.

Overall Rating: 6 (out of 7)-The X-Men are back to their hated and feared baseball playing superhero selves and also face some intriguing new challenges in X-Men Gold #1.