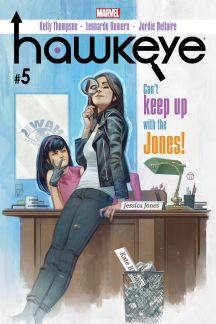 Like a large vanilla shake and an In-N-Out Double Double, Jessica Jones and Kate Bishop are a winning combination in Hawkeye #5. There honestly doesn’t even need to be a plot, I could read a whole comic book of their Kelly Thompson penned snarky banter, life lessons, and Jessica’s eye rolls at Kate’s goofy pop culture references. But Thompson, guest artist Michael Walsh, and colorist Jordie Bellaire give us a pretty kick-ass, Sunset Boulevard/Mulholland Drive dark Hollywood mystery to go along with the buddy comedy dynamic between Kate and Jessica. They are looking for a missing girl named Rebecca, who is connected to a douchebag named Brad, and it only gets more twisted from there.

Walsh’s art can switch gears like an aggressive Audi or Maserati driver on the 5 going from a movie poster worthy splash to an eighteen panel grid and eventually the weird stuff that happens at the end of the issue. He also integrates Leonardo Romero’s visual tools, like the purple P.I. vision, as she follows Brad’s obnoxious vanity plate sporting car drive down the bro-est of stores, a copyright friendly version of Sunglass Hut, while riding behind Jessica on a Vespa. Bellaire continues to be the best colorist in the game with her deep blue on the opening page and at the mansion party that Jessica and Kate inevitably end up giving the art a Lynchian vibe, and an orange sky acting as a clear transition from hectic L.A. day to sultry night.

The primary reason that I gave Hawkeye #5 a perfect score is that the dynamic between Kate and Jessica is perfect, and it’s a shame they don’t have some kind of team-up book starring them. And it’s not just banter with no substance even though jokes are always nice. Jessica and Kate have an unlikely mentor/student vibe with Jessica giving her some solid tips tempered with sarcasm about the private eye life, like stakeouts are the least glamorous part of the job and confidence can get you anywhere. Seriously, rocking her trademark jeans and leather jacket outfit, Jessica Jones tries to get into a high class, crab puff serving Hollywood party. This charisma kind of rubs off on Kate in a scene where the mansion bodyguard’s reactions has to be seen to believed. Jessica is the picture of calm compared to Kate freaking and geeking out around her, but her rage comes out through icy one-liners like her reaction when Brad is about to say “Bitches be crazy.” That “interrogation” scene puts the ones in her solo comic to shame and introduces Kate and Jessica’s sassy and sassier cop routine. 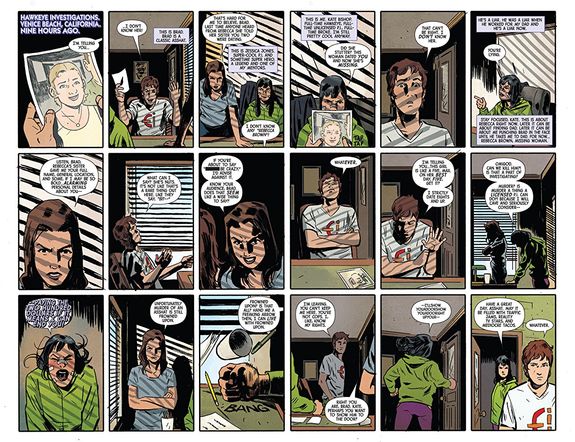 Walsh’s art skills aren’t merely limited to layouts, L.A. mansion architecture, and the third thing is a huge spoiler. He leans more towards cartooning than photorealism and can show a character’s attitude with a few lines in a facial expression like when Jessica Jones immediately sees that Rebecca is actually Hollywood starlet Dhalia Doran. The actor goes from a Stepford smile to a deep frown in the space of a panel. This also shows Jessica’s blunt object approach to the truth that comes in handy later when she finds out the real reason that Kate wants to be a P.I. while hiding in a blue tinged closet in the mansion.

Hawkeye #5 has it all: well-timed jokes and entertaining dialogue from Kelly Thompson, a mystery that sucks you in and gets progressively stranger by the page, well-paced storytelling from Michael Walsh, and beautiful color choices from Jordie Bellaire.  Even if you missed the first four issues of the series, this is the one comic from Marvel you should buy this week for the gems of snark from Kate Bishop and Jessica Jones alone.

Verdict: 7 (out of 7) – Hawkeye #5 is a masterpiece of mystery and snark with a (bigger than a) whale of a plot twist.