Greetings, worthy travelers, and welcome to The Nerdery. I call it The Nerdery, because if you’re looking up reviews of comic books based on video games, chances are you are probably a pretty big dork. That said, I am also a pretty big dork and we are about to go on quite the interesting journey of geekitude as I take you through my review of Mass Effect: Invasion #4.

To begin, let’s give credit where it is due; the story arc was written by Mac Walters and scripted by John Jackson Miller. Art is pretty straightforward with pencils/inks by Omar Francia and colors by (yes, for my 3rd review in a row) Michael Atiyeh. I’ll go ahead and admit now that I’m a fan of Atiyeh and generally like his work quite a bit. In this particular instance, he plays with both a muted and explosive (literally) palette to really give the strong lines from Francia some extra form. The shadows and light that play in the (relatively frequent) explosion scenes really help illustrate how well the two artists work together.Â 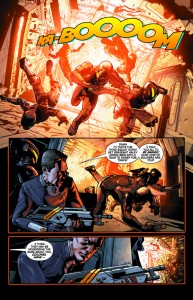 This is the conclusion to the Invasion story arc that is a prelude to what is coming in Mass Effect 3. I’m going to go ahead and assume that you’ve read issues 1-3 at this point, but will do my best to not spoil anything for those that are using this review as a means to determine purchase of the arc itself.

In essence, Aria T’Loak is the resident ruler of the Omega station, which lies on the very edge of the explored galaxy, next to a relay station that transports ships to and from the very home of some serious alien threats. The arc focuses on the general situation, but this conclusive issue focuses on the final interactions between Cerberus forces on Omega and Aria’s response to their presence.

One thing I can certainly say about the story of the Mass Effect series in general, as well as this particular arc and comic, I’ve never sat there and said to myself, “This is terrible and I’m not impressed at all.” Mass Effect 1 had a huge impact for me, in terms of the story. It was a well-conceived plot that just got deeper and deeper as the game went along. This trend only continued in Mass Effect 2, and now, with all these various characters entrenched in this nearly tactile story, seeing the actions of side characters, such as Aria, really fleshes out the experience. In a word, Aria is a badass, and that was made quite clear in the second video game installment. She was very intriguing to me then, and I was really happy to see her character explored in more depth in her own arc here.Â 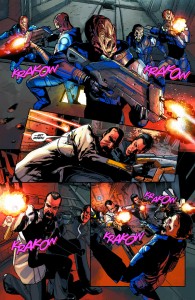 Generalizations aside, let’s focus some on this particular issue. This is the conclusion to the arc, and a lot has been set up at this point. In fact, it seems as though the whole arc has been a chess game up to this point, pieces moving back and forth, with some losses and sacrifices on each side. In that respect, this issue is the end game; the point when the Rubicon has been passed and we, as readers, simply get to sit back and enjoy the carnage and find out who ends up on top. The issue is full of twists, back and forth, as our two main forces, Omega and Cerberus, push and pull between brute force and tactical planning. Troops are abandoned, assaults are lead, there is betrayal, there is death, there is promise of revenge, and there are references to historic battles from our very own earth. As an overall estimate of the intensity of this issue, it truly is engaging on every level. The art and panel placement work very well in integrating the story into the art as a whole. The issue is unpredictable and fast-paced, the characters are very true to their motivations (whether they be simply from this comic arc or from the games themselves), and the integration of all the factions of Omega, the Reaper tech, and Cerberus lead to a wonderfully complex sequence of events.

If there’s one series, in any medium, that has never let me down during its run thus far, it’s Mass Effect. If you’re looking to gear up for the third installment, pick up this arc as a whole, as it will certainly explain what would otherwise be a pretty big surprise once you start into that game. As for this issue in particular, if you’ve read 1-3, chances are you will already be picking this up. If you, for whatever reason, have lost interest in the arc, I’d suggest going ahead and picking this up anyway, as the conclusion to this side story will certainly surprise you.

New Reader Accessibility : 1Â – The book assumes you have a knowledge of the game universe as well as the previous 3 issues.