A Peek into the Next Generation, Part 1: Wii U

The 2011 holiday season marked 6 full years the Xbox 360 has been on the market in North America, and 5 full years for the PlayStation 3 and Nintendo Wii. By the measure of any other video game console generation, this would be about the time the next-generation consoles should be making their debut, yet so far only the Wii U has even been announced, leaving us gamers with little more than a bevy of rumors, whispers, and dreams. The “why” for this shift in generational timing is an entirely different subject that will not be discussed here; instead I’d like to review the scant details we already know about the next generation and what we might reasonably be able to expect from those consoles–and what sorts of rumors we can probably ignore. First up is…

What we know: The Wii U is the closest thing to a known quantity that we have for the next-gen. Announced at E3 2011, we’ve already seen the system’s controversial, tablet-like controller, as well as its ability to render HD graphics that appear as detailed as, and perhaps even slightly better than, what is capable with the Xbox 360 and PlayStation 3 hardware. We also know the base unit very much resembles a rounded-off Wii and is capable of beaming the game to the controller’s screen, potentially bypassing the TV altogether. We also know it’ll be backward-compatible with Wii software (but not GameCube discs), utilize Wiimotes as additional controllers, and as of CES 2012 was being penciled in for a consumer release in the latter half of 2012. Several notable 3rd Party companies have already pledged support with games like Batman: Arkham City and Aliens: Colonial Marines, but other than that we haven’t really seen much on the software front. Oh, except that Dragon Quest X Online will be an MMO that is cross-compatible between Wii and Wii U, and eventually there will be a new Super Smash Bros. that will be cross-compatible with a 3DS version.

What we’ve heard:Â Not much besides what has been officially shared, as is usual when it comes to new Nintendo hardware. However, there have been some rumblings that Shigeru Miyamoto is working on a new project for Wii U, perhaps maybe of a scaled-downÂ variety. The long-promised Pikmin 3 has also reportedly made the transition from the Wii to Wii U. And–long a weak point in Nintendo consoles–the system’s online capabilities are said to be significantly beefed up (perhaps Origin-powered?), which may even include an Xbox Live-like array of entertainment apps. Finally–in what would technically be classified as “what we haven’t heard”–Nintendo has been silent about its first party development, which no longer has a publicly-announced console title now that The Legend of Zelda: Skyward Sword has been released.

What we think: There has been a lot of buzz and a lot of confusion regarding the Wii U and its new tablet controller. Like the Wiimote before it, there are plenty of skeptics who doubt that such a radical input method could really translate to “hardcore” gaming. On the other end of the spectrum, some skeptics are heralding the iPad + AppleTV Airplay combo as stealing the Wii U’s main selling point a year in advance. Doubts are certainly prevalent, but Nintendo has proved such doubters wrong enough times to leave us waiting for what they actually bring to market. The Airplay comparison, while similar, cannot be taken seriously at this time when the iPad is so limited in both power and input methods, not to mention the astonishing price mountain users have to climb to achieve this functionality. A more daring challenge along similar lines could come from a combination of Sony’s PlayStation 3 and PSVita systems, but again price will (likely) be a huge advantage for Nintendo. 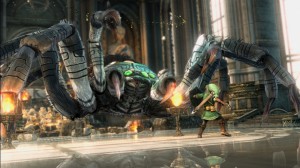 My biggest concern is that even though Nintendo is aiming to close the HD gap and recapture the “core” gamer, it’s coming too late in the game and could be easily outshadowed by the next Xbox and PlayStation, regardless of when they come out (2014 seems to be the latest date for this, so at most Nintendo will have 2 years before it is facing a significant hardware disadvatange–again).Â Nintendo’s business acumen almost assures the system will be a success by their standards, but how fondly we will look at this system in three years is another story. Of course, that could put the onus entirely on the Wii U’s one-per-system tablet controller. It’s a risky move to say the least, but for now Nintendo has earned the benefit of the doubt. A revamped online service that brings the Wii U ecosystem up to par with Xbox Live and PlayStation Network will be critical, but in that case Nintendo’s reputation again prevails–I’ll believe it when I see it. Also, don’t discount that we’ve heard the last of connectivity with Nintendo handhelds; allowing a 3DS to be a controller could prove a boost for multiplayer games. One final concern: the controller’s touchscreen. Nintendo has opted to use the cheaperÂ resistiveÂ technology it already employs in its DS and 3DS systems rather than the more responsiveÂ capacitiveÂ tech used in smartphones and the PSVita. How much this will impact the gameplay experience remains to be seen, but in a world where people are used to capacitive touchscreens, the antiquated tech could become a big turn-off.