Back in 2002, I was gifted an Xbox for Christmas. The thing was big, black and heavy, and I only wanted it for one thing. Halo. Little did I know that Halo would be a game that not only changed the way that I played, and enjoyed games, but it would set new standards for play across the board again, and again, and again.

9 years later, 10 years after the Xbox and Halo first launched, I found myself incredibly excited to play Halo: CE again, just this time, it has changed.

For those who are new to Halo, Halo CE Anniversary is a remake of the revered FPS Halo: Combat Evolved first released on the original Xbox. Halo CE has you play as Master Chief; a genetically engineered super soldier unravelling the mysteries of a ring world after your ship, the Pillar of Autumn is brought down by an organization of alien races known as The Covenant. You can use various weapons, both Human and Covenant in order to dispatch your foes as well as pilot a variety of vehicles that are easy to drive yet are unique at the same time. 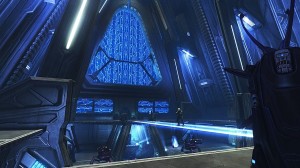 At first glance, it’s easy to dismiss Anniversary as your typical standard fare HD remake. That is until you compare the visuals to that of the game originally, and fortunately there is an option to do this in game “on the fly”. One press of the back button at any point during gameplay will toggle “Classic Mode” where, after a few seconds, all the visuals are restored to how they were in 2001, and with no alterations. And when you do this, you realise the drastic visual improvements made. Nowadays, water reflects light, dust comes off a Warthog’s wheels as it speeds across dirt, and the new skyboxes are beautiful. It’s actually quite fun to spend time finding locations in the game and making comparisons between the visual modes. Levels have more detail and look less samey thanks to the visual improvements and one level has become easier to navigate thanks to some new visual clues. However, after a while I found myself somewhat spoiled by the new visuals and questioning the point in playing in classic mode, when the new visuals look so good. 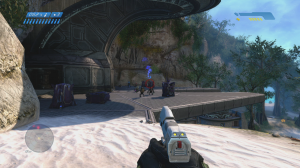 343 and Sabre have also updated the sound design. Dialogue remains the same, but every sound effect has been updated, and I found myself wowed by some of the new sound effects. The pistol sounds as powerful as it should, the rocket launcher whirrs as the barrels turn, and the Covenant’s weapons all appropriately sound like electronic devices. The music was also rerecorded, with a lot of it being orchestral, and you can change between modern and classic music in the options menu. It’s not as convienient and accessible as the toggle for the visuals, but it’s still a welcome addition as I found that the updated renditions of the music aren’t as memorable or fitting as the original score. Strangely enough the classic sound effects are missing, and because of this you are forced to play in classic mode with modern sound effects, which, as a long time Halo fan, I find both baffling and a little jarring.

Gameplay-wise, little has changed, for the better or worse. Online co-op for you and a friend has been added, skulls similar to the ones in the later releases in the franchise, and terminals have been added in every level. The latter two you will only find with classic mode disabled, though they’re a welcome addition as they give variety to the gameplay and flesh out the backstory a little more. The pistol is as overpowered as it has always been, and all the weapons are identical to how they were 10 years ago. I spent one play through trying out various glitches such as being launched out of the cryo bay at the start of the game, obtaining three weapons, and obtaining a Banshee intended to be driven by AI. I’m happy to report that all the classic bugs and glitches still exist, and theyre just as fun to exploit as ever. The default control scheme needs changing to the scheme titled “The Duke” for the most authentic experience, but other than that, the controls feel as tight as ever.

On the multiplayer side, you’re given a code for a map pack for Halo: Reach as well as the ability to play these maps in Reach’s multiplayer straight of CE: Anniversary’s disc. This map pack includes six faithful remakes from Halo: CE and Halo 2 as well as a new Firefight map set in the second level of CE’s campaign. All of these maps are well made, with some including some 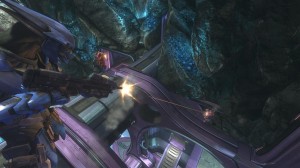 slight design changes to suit Reach’s gameplay. 10 years later, these are still fun to play again and again, and the updated visuals provided by Reach’s engine keep these maps feeling fresh after all this time.

Overall Halo: CE Anniversary is a faithful remake that delivers in all the right places. The gameplay remains the same while the visuals and audio have been updated in a way that makes the game feel that it was made in 2011. The original’s faults still remain, and I would have liked to see an option for classic sound effects, but even considering Anniversary’s few faults, a lot of love was poured into this game, and this is a must buy for anyone who is fond of the original.