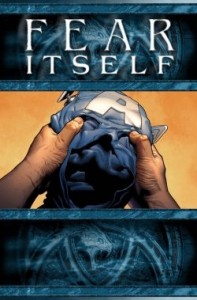 Marvel Solicit: The blockbuster Marvel event of the year continues! AFTERMATH: the heroes reel in the wake of last issue’s shocking finale. Thor finds himself unwelcome in two homes. Steve Rogers makes the decision of a lifetime. And Iron Man prepares to make the ultimate sacrifice. Every move the heroes make just serves to make The Serpent stronger– and the feat he accomplishes in this issue will rock the Avengers.

What I thought of it: Four issues in, and Fear Itself is finally kicking it into high gear.Â I’veÂ liked the previous three issues, but it always felt like I’d read most of them before even picking up the comic. Issue 4 is not like that. The set-up is now pretty much done, and Fraction can now get into what this story is really about.

The issue starts briefly by giving us some of the reactions to Bucky’s death. Not a lot of time is spent on this, since there is a war going on. The main reaction we see is the Black Widows, which is fitting since she was in a relationship with Bucky. I would have liked to have seen more from Steve regarding Bucky’s death, but that’ll probably touched upon later on in Fear Itself, or in the Captain America & Bucky ongoing.

This issue see’s the reformation of the trinity Avengers: Iron Man, Thor and Steve Rogers as Captain America. Since he returned last year, Steve Rogers has been Commander of the Avengers teams. He hasn’t been in the Captain America outfit since Siege. This is the issue that see’s him return to Captain America. We all know the real reason why he’s back in the costume (he has a movie out this summer), but I still don’t think that takes away from his moment of putting the costume back on. From reading the tie-ins, I think Fear Itself really shows the Marvel Universe in a time of need and desperation. It’s a perfect time for the original Captain America to return.

In this issue, we also learn more about The Serpent. This is probably something we should have had in issue 1, or even in a prologue issue. If we hadn’t learnt more about The Serpents past, then Steve Rogers return as Cap may have fell flat. He also makes a transformation from his old withered form, into a more youth ale powerful form. This, along with what seems like more minions, makes it look like he’s going to be causing a lot more trouble for the heroes.

Thor references an Asgardian prophecy which, I have to be honest, did remind me a lot of Harry Potter. From what I got of it, it seems like Thor can’t kill The Serpent without dying himself. The two finally meet, face to face. They don’t really have much of a battle, as Fraction is probably saving that for the big finale.

My favourite moment from the issue though comes from a scene involving Iron Man. I’m very much a fan of Matt Fractions take on the character, and I was thrilled with what he did with him in this issue. He demands an audience with Odin, and in doing so, sacrifices something very dear to him. It’s pretty much the only thing of value he’s had in his live for the last several years. Most people will probably see this as a waste, and say Odin would have gave him an audience eventually, but if they do say that, I think they’re missing the point. It’s a defining character moment for Tony Stark. I’m surprised, and actually, pleased, that Fraction chose to do it here and not in the Invincible Iron Man title.

Once again, the art in this issue is amazing. Fear Itself is really shaping up to be one of Marvel’s best looking events, which is saying a lot when you look at the quality of art from previous events. Immonen plays on the standard comic book page layout, so that no two pages look the same. There’s a mix of big epic panels, to smaller, more characterised panels. I’d also love the last page as a pinup poster.

New Reader Accessibility: 4. It is 4 issues in, but I still think you could jump on with this issue. There is a recap page, if you need it. There’s also a page that introduces all of the main players in Fear Itself, although some characters, like Iron Fist and Luke Cage, don’t need to be included on there. If you’re thinking of jumping into this event, it’s now or never.

Recommendation: Buy it. There’s a lot of payoff in this comic. The trinity Avengers are back. There’s action in here. And the art, as always, is fantastic.