Guardians of the Galaxy #0.1 Review 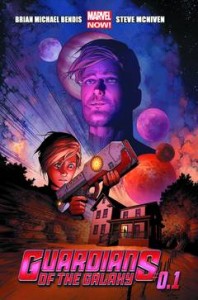 Try and imagine what a story would be like if you mixed aspects of Star Wars, take Han Solo for instance, and mixed in Superheroes, say Green Lantern. What do you think you would come up with? Something interesting? Fun? Exciting? That is exactly what you get with Guardians of the Galaxy. It is not often that a simple “distant dad” origin story can hit on all of the right emotional cues like Guardians of the Galaxy 0.1 did. We are introduced to a simple story of love and loss that is so heartfelt and sincere due to some excellent dialogue and writing.

I will admit I was not planning on picking this up, except last minute I saw it at the checkout counter and decided to give it a try. Turns out I made the right decision.

Guardians of the Galaxy, begins 30 years in the “past” with a woman (Meredith) upset over a break up when a ship crashes in hear yard. She helps the man and cares for him after disarming him from an odd looking gun. When he wakes up he is shocked that she speaks English and begins to explain to her that he is not for Earth, but from Spartax and is some kind of royalty. She allows him to fix his ship, and learns that he is fighting a war and must return to his people as soon as possible. They become very close, but he eventually must leave even though they both seem to be falling for one another. When he leaves he tells her he will try to come back and that she can keep his “special” gun.

We then jump forward 10 years and learn that that Meredith had Spartax’s son and his name is Peter Quill. Peter is very bitter about not having his dad in his life and that he seems to not believe his mother’s story about his father being from space. Peter is very interested in comic books and superheroes. We learn that he seems to have courage and a bit of a hero aspect in his DNA when he stands up and fights a bully at school who was picking on a girl. Later that night when Peter gets home is when his life is forever changed.

Peter arrives home after school and his mother is mad he got into a fight. After telling him to go inside three lights appear. This is when you really get a feel for the artwork the earth tones really give this story a warm family feeling up until this point. We see aliens emerge from the trees. They shoot and kill Meredith, the red laser blasts really stand out over the earth tones and allow you to become more aware of what just happened. The aliens chase Peter and he ends up shooting them with his mothers shotgun, and also finds his fathers gun. He runs out of the house right before it blows up, the aliens believe they have ended the Spartax bloodline because they believe Peter to be dead. Peter blacked out and wakes up in the hospital and the nurse tells him it will be okay, and gives him his “toy” gun. 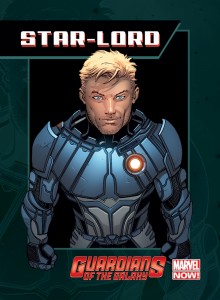 We then up forward another 20 years to an adult Peter finishing the story on board a spaceship in Star-Lord gear saying that he is going to take down the Badoon so that they can’t harm Earth again. We then learn that Peter was telling Tony Stark this story and asks him in he is in. Of course Iron Man is!

I really enjoyed how it was a simple origin story and addressed why Star-Lord is out of this mission. It might be a bit simple for people, but I think it is something that works well and allows the reader to feel emotionally tied to this character and generally root for him to avenge his mother’s death. Plus Iron Man at the end was a nice touch, had a marvel movie end of credits feel to it.

Overall, Guardians of the Galaxy #0.1 Buy It- This is a well written story full of emotion and with some beautiful artwork that will make you ready to see what happens next in this heartfelt story.