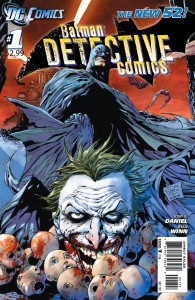 Â Â  Detective Comics #1 follows Batman a few years in the past, when the police force were still unsure of him and sees him going head to head with the Joker, as well as a new, unforeseen foe.

I’ve read all of Tony Daniel’s work as writer and artist on Batman, but it was never quite right, something about it was off. This time, Tony Daniel has hit a home run. He really kicks this series off with a bang, getting straight into one of the most well known hero/ villain pairings in pop culture, and successfully makes it feel new and keeps you unsure of what’s going to happen next. He’s finally found out how to make these mystery stories work, and goes down some roads that are you definitely don’t expect, including the last page. He also works in some good character moments that help to set up the time period, like a meeting with Jim Gordon, or ones that simply introduce the supporting characters into this new universe, like Alfred Pennyworth. His inclusion of these big characters will definitely help to get new readers in, and for those of you who already read Batman, it’s just icing on the cake.

Much like his writing, his artwork has improved greatly. There’s a lot more detail and expression put into the pages, and these iconic characters just look fantastic to be honest. There really isn’t anything to nitpick about with the art, the inks work well with the pencils, and the colour job is compliments those as well. One thing I do want to bring up is that the artwork definitely looks and feels very gritty, which both compliments the story, but also really drives the time period home, when Batman’s very much still a vigilante. Come to think of it, the book in general just feels a lot like Batman Begins and The Dark Knight, which was a very smart move on their part. 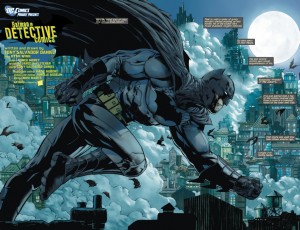 Survival Rating: LIVEÂ Yes, I’d say it will. Detective Comics has always been a good seller, and with something this good, I see no reason for that not to continue. It’ll probably convince a lot of new readers to pick up at least the next issue as well.

Recommendation? Buy it. It may not be the best Batman we’ve seen (even recently), but it certainly deserves your attention.